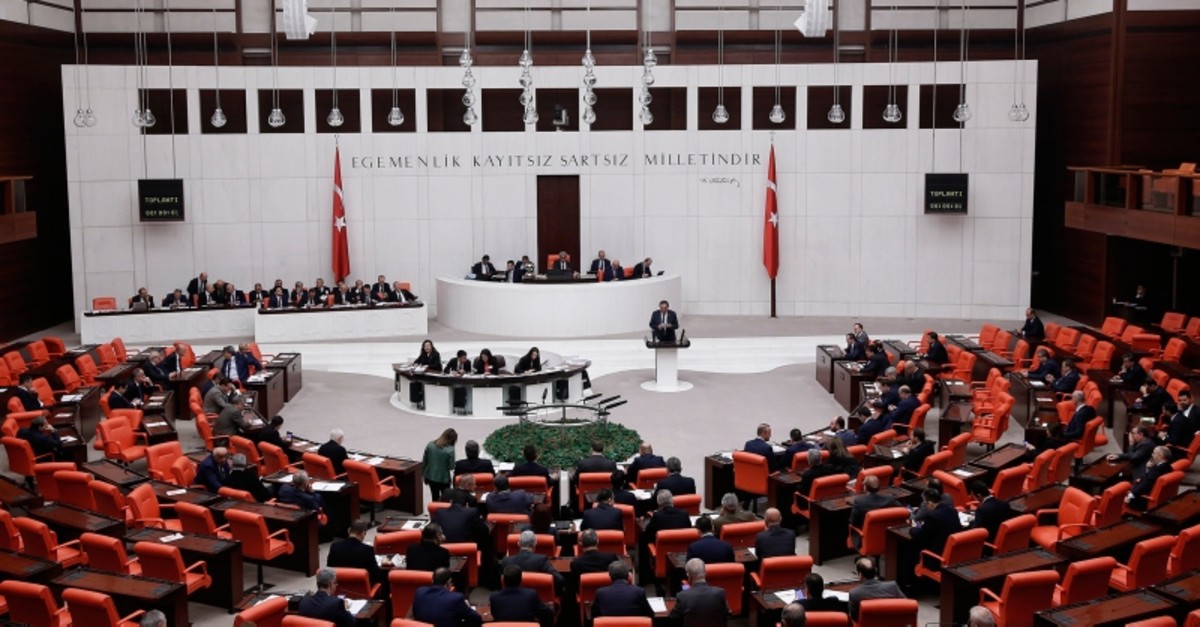 | AA Photo
by Daily Sabah Dec 16, 2019 5:27 pm
On Monday, the Foreign Affairs Committee in the Turkish Parliament approved the deal with Libya on military cooperation.
Meeting under the chairmanship of the ruling Justice and Development Party (AK Party) deputy Volkan Bozkır, the commission approved the second part of the memorandum signed with Libya, regarding security and military issues.
Bozkır said that they are expecting the deal to be discussed in Parliament’s general assembly on Wednesday. The agreement will become law after being ratified by the full parliament.
Preparing to strengthen its relations with Libya further, to the point of considering sending troops to the war-stricken country amid a recent cooperation deal over the Eastern Mediterranean, the deal with Libya on military cooperation was presented to Parliament for ratification on Saturday.
Seeking to "provide ground for relations and develop cooperation" between Turkey and Libya's U.N.-recognized Government of National Accord (GNA), the agreement includes increased cooperation in the exchange of personnel, materials, equipment, consultancy and experience between the two sides.
It also offers Turkish support for the establishment of a Quick Reaction Force for police and military in Libya, as well as enhanced cooperation on intelligence and in the defense industry. Turkey and Libya signed two separate deals on Nov. 27 following a meeting between President Recep Tayyip Erdoğan and the head of the Presidential Council of GNA, Fayez al-Sarraj, in Istanbul. One of the deals was critically important in enabling Turkey to secure its rights in the Mediterranean while preventing any fait accompli action by other states in the region. The other agreement was on military cooperation.
The earlier memorandum on maritime boundaries asserted Turkey's rights in the Eastern Mediterranean in the face of unilateral drilling by the Greek Cypriot administration, clarifying that the Turkish Republic of Northern Cyprus (TRNC) also has rights to the resources in the area. It went into effect on Dec. 8.
Following the military cooperation deal, Erdoğan said Ankara might consider sending troops to Libya if the Libyan government made such a demand.
As a result, the agreement became one of the leading topics on Parliament’s agenda. The deal outlines the establishment of a military unit with the duties of a police force to function in Libya with Turkish training. Turkey will also provide consultancy, experience, planning and equipment. It also outlines the formation of an office to orchestrate defense and security cooperation between both countries.
The deal also suggests that the two countries cooperate in terms of security and defense industries, the fight against terrorism and illegal migration, as well as the security of maritime, airspace and land borders, and the prevention of smuggling. The two countries are also to act together on topics of training and information sharing over natural disasters, conducting joint exercises, governance of personnel and bilateral official visits. Both countries are also expected to exchange intelligence, cooperate on operational and logistic issues, and exchange information on logistic systems, military medicine and health services, electronic information systems, cyber defense, protection of peace, humanitarian aid and the fight against pirates. There will also be an exchange of personnel for the improvement of vocational training as well as social, sports and cultural events.
Last Update: Dec 20, 2019 2:27 am
RELATED TOPICS