Suffering of Muslims can be stopped with cooperation, proper leadership 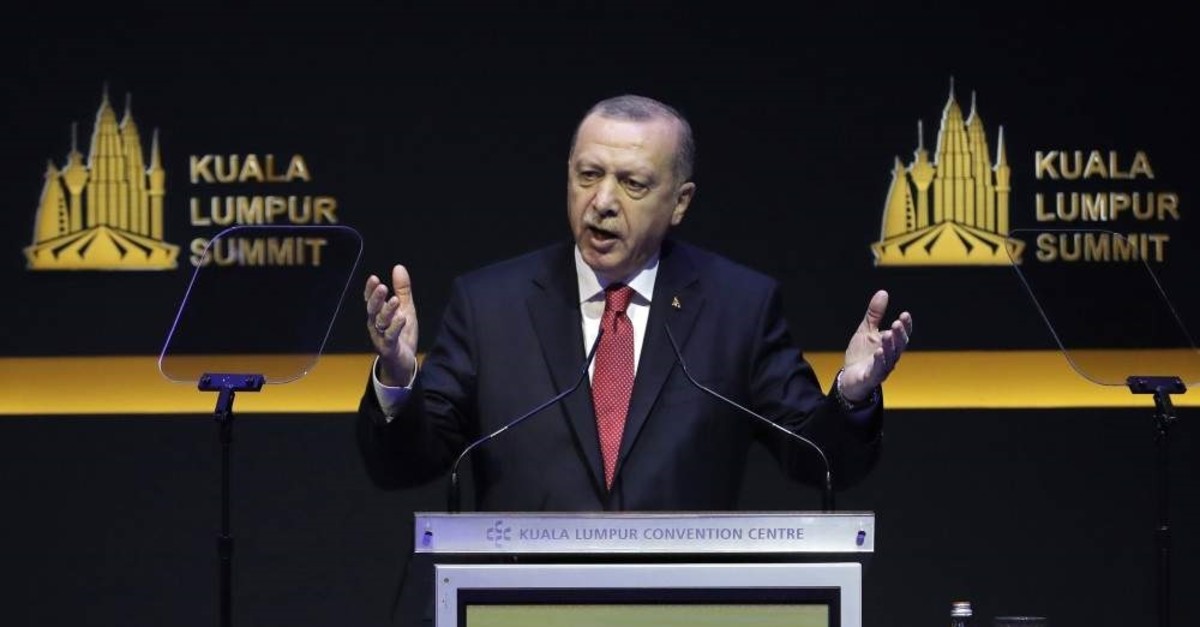 Embroiled in conflicts that have cost millions of lives, the redemption of the Muslim world is possible through unity and leadership, President Recep Tayyip Erdoğan said yesterday

Suffering of Muslims can be stopped with cooperation, proper leadership, Erdoğan says

Around 94% of the people killed in conflicts around the world are Muslims, but this can be prevented through cooperation and proper leadership, President Recep Tayyip Erdoğan said at the Kuala Lumpur Summit on Thursday, reiterating his calls to reform the United Nations Security Council (UNSC) to better represent and defend the rights of all people.

Speaking at the opening session of the summit, which brings together intellectuals, academics and Muslim leaders to create solutions for problems faced by Muslims, Erdoğan highlighted the importance of solidarity and cooperation among the countries.

"One in three weapons sold globally are sent to the Middle East," the president said, noting that 94% of those killed in global conflicts are Muslims. He said that while Muslims continue to shoot and kill each other over trivial disagreements, Western arms dealers become wealthier because the former spend their money on weapons rather than education, health, research and development.

The president urged Muslim leaders to self-criticize and reminded them that they spend their energy on civil strife while others are busy talking about artificial intelligence, quantum computers and robotics.

"We need to focus on projects that will aid our shortcomings and realize our potential," Erdoğan told Muslim leaders, urging them to enhance cooperation in strategic areas including defense, energy, advanced technology and finance.

He noted that they will have the chance to discuss the situation of Muslims, who make up a quarter of the world's population.

The president also touched upon the issue of inaction following global meetings among Muslim leaders.

"The biggest problem of platforms that bring together the Islamic world under a single roof is the issue of implementation. This is the reason why we have not covered any distance in the Palestinian cause, are unable to stop the exploitation of our resources and cannot say stop as our region is torn apart through the rhetoric of sectarianism," Erdoğan said.

However, the Muslim world is not powerless, according to the president, and they have the resources, the population and the geographic position to overcome obstacles with proper leadership.

"If a significant part of the Muslim population is dealing with hunger, famine, poverty and ignorance, despite all the opportunities, the oil, population and natural resources God has bestowed on us, then we need to put the blame on ourselves first," he said.

The president touched upon the issue of representation at the UNSC, noting that it fails to represent 1.7 billion Muslim people throughout the world because that system has "expired."

He also said an update of the Organization for Islamic Cooperation (OIC) was also necessary to improve its effectiveness.

Cooperation in all areas, including trade, politics, diplomacy, the defense industry and technology is the prescription to cure the ills, according to Erdoğan, because there is great potential.

Malaysian Prime Minister Mahathir Mohamad also pointed out that the Muslim world is passing through "a state of crisis" and noted that the summit "may find solutions, if not to end these catastrophes, at least to awaken the Islamic world, the Ummah, to the need to recognize the problems and their causes."

"Understanding the problems and their causes may enlighten us on the way to overcome or mitigate disasters that have befallen the Ummah," he added.

Mahathir, who is also chairman of the summit, said the objective of this year's event is "not to discuss religion, but the state of affairs in the Muslim world."

"We are attempting to start small. And if these ideas, proposals and solutions are acceptable and prove to be workable, then we hope to take it up to the larger platform for consideration," the prime minister indicated.

Division within the Islamic world and the overall problems of the Muslim community have always been on Erdoğan's agenda.

"The fault lines among Muslims are further sharpened by the highlighting of differences in races, languages, sects and temperament," the president said back in November.

Noting that the Turkish nation never discriminates between the Rashidun Caliphs, referring to the 30-year reign of the first four caliphs following the death of Prophet Muhammad, Erdoğan said that Shiism and Sunnism are reflected as separate religions by some.

Mentioning that sectarian and interest-oriented approaches have prevented Muslims from finding common ground, Erdoğan stressed that an understanding that places self-interests above the interests of the ummah has nothing to offer to Muslims.

The problems of the Muslim world have been culminating since the end of World War I when Western states started occupying Muslim territories. Despite the fact that independence has been achieved for the most part in Muslim communities, problems continue to spread like a plague, causing the decline of Islamic civilization. However, recently, many pundits claim that a resurrection of the Islamic community is at stake with Turkey leading the Muslim world, while countries like Malaysia and Indonesia provide welfare with their economies.

Later in the day, President Erdoğan attended a roundtable meeting on the priority of development and challenges with Mohamad and Iranian President Hassan Rouhani as part of the summit.

Hundreds of government officials, businesspeople, representatives of civil societies and experts from different sectors across the Muslim world followed the meeting and asked the leaders questions.

"Turkey already hosts 4 million (refugees), now another 50,000 are heading to our land from Idlib, (Syria)," Erdoğan said, pointing at the challenges Turkey faces. "No one asks how Turkey handles these problems," the president underlined.

The escalating violence in Idlib has shattered a deal reached in September 2018 between Russia and Turkey to establish a buffer zone.

"When we say 'we need to build a safe zone,' no one gives any support, but when it comes to weapons, the guns come," Erdoğan added.

According to the safe zone plan, 140 villages and 10 district centers will be established within the 30- to 40-kilometer deep safe zone in northern Syria, housing 5,000 and 30,000 inhabitants, respectively. The settlements will be provided with various facilities so the people living there will be able to have a normal life with every necessity met.

By establishing a safe zone in northern Syria, Turkey hopes to resettle displaced Syrians currently living in the country and get rid of the PKK and its Syrian affiliate, YPG terrorists, in the region.

Turkey has long been fighting to eradicate the presence of terrorist groups in northern Syria, conducting three cross-border operations there – Operation Olive Branch, Euphrates Shield and most recently Peace Spring. Following the liberation of areas in northern Syria, efforts to clear bombs and improvised explosive devices were launched, and administration duties were given to local councils. So far, thanks to these operations, 371.000 Syrians have returned to their hometowns.

The president also mentioned the trade wars, saying that at a time when trade wars are being used as tools to pressure nations, the issue of using national currencies for bilateral trade has become urgent.

He said there is great potential among Islamic countries in the field of interest-free finance.

"We can establish a joint working group to realize this potential," Erdoğan said.

He expressed that Turkey reduced its foreign dependency to 30% in the defense sector from 80% in 2003.

"We are one of the four most developed states in the world in armed unmanned aerial vehicles," he said.

"We take care of our defense needs by producing warships, helicopters, tanks, armored vehicles, missile technology and even export them to friendly nations and allies," Erdoğan added.

Turkey, Russia and Iran have agreed to use their local currencies for trade between the three in September. The sanction policies by the U.S., particularly related to Turkey, Iran and Russia, have recently triggered the issue of looking for an alternative medium for financial transactions that can decrease the domination of the dollar in global trade.

Erdoğan said previously that Turkey was preparing to increase trade with its top trade partners, including Russia, China, Iran and Ukraine, in local currencies instead of the U.S. dollar, adding that they were also ready to do the same with European countries.