25,000 flee toward Turkish border in two days as regime intensifies attacks on Idlib 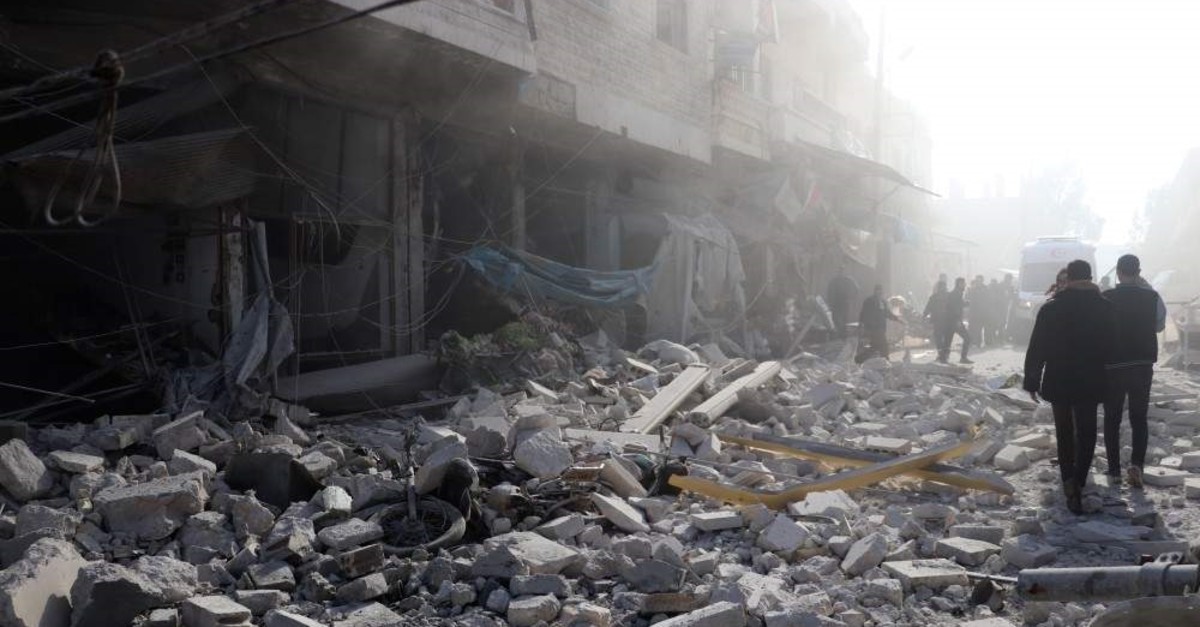 Syrian regime attacks targeting civilians in Idlib's de-escalation zone are triggering a new wave of refugees, forcing 25,000 more civilians to flee their homes in search of safer areas near the Turkish border

As the Assad regime and Russia have intensified their attacks on Syria's last major opposition enclave, at least 25,000 civilians have fled Syria's northwestern region of Idlib and headed toward Turkey over the past two days.

According to Mohammed Hallaj, head of the Response Coordination Group in Idlib, the displaced people are mainly seeking refuge along the Turkish border and in areas Turkey has cleared of terrorists during its recent operations.

It is difficult to determine the exact number due to incessant airstrikes and attacks on land, but the confirmed number is 25,000, Hallaj elaborated. The southern settlements of Idlib and especially the Maarat al-Numan district rank first with the highest number of people displaced.

Aid agencies have been forced to suspend their work in some areas where hospitals and settlements were heavily targeted. Displaced families lack essential living material such as shelter, tents, beds and blankets as well as food and water.

The number of seized villages in Idlib and particularly around Maarat al-Numan and Saraqib rose to 15, following the regime operations that started two days ago when six further settlements were taken under control, ignoring the Astana agreement.

Moreover, five civilians lost their lives when Russian warplanes targeted Idlib late on Saturday night, while eight more people died earlier on the same day and four others were killed in separate airstrikes in other towns in southern Idlib. Thirty-six others were wounded, the U.K.-based the Syrian Observatory for Human Rights said.

Turkey has frequently warned the international community of the immanence of a humanitarian disaster and fresh wave of refugees unless actions are taken and the Syrian regime is restrained. Yet, no worthwhile actions have taken place, as airstrikes and artillery continue to target thousands of civilians.

Ankara has also proposed the establishment of a safe zone in northern Syria cleared from all terrorist elements in order to allow for the resettlement of Syrians who have fled to Turkey from war-torn areas. Turkey's safe zone plan aims to host millions of Syrians in a safe and stable environment.

The bombardment came as violent clashes continued for a third straight day between regime loyalists and opposition forces that dominate the province.

The intensification of airstrikes on southern Idlib since Dec. 16 has forced tens of thousands to flee their homes, according to the United Nations. It is also known that tens of thousands of the displaced are moving toward the Turkish border and liberated areas, especially to Operation Euphrates Shield and Operation Olive Branch regions, to seek refuge.

Turkey has carried out two cross-border operations west of the Euphrates River – Operation Euphrates Shield launched in August 2016 and Operation Olive Branch in January 2018 – to drive terrorist groups, including the YPG and Daesh, from its borders.

While the country liberated northwestern territories from Daesh, it also prevented the YPG from establishing a de facto autonomous region in Syria connecting Afrin in the northwest to Kobani and Jazeera in the northeast, which Ankara describes as a "terror corridor" posing a grave security threat to its national security.

Since then, Turkey has ramped up efforts to get daily life in these areas back to normal and make local people's return to the region possible.

Since 2011 – the year the war broke out – Turkey has received a constant flow of displaced Syrians fleeing the conflict, with the numbers of refugees expanding from mere thousands to millions. The latest numbers according to the Interior Ministry were 3.7 million Syrians in Turkey, the biggest share of refugees among host countries. Refugees from Syria now account for about 4.29% of the total population. Women and children make up a majority of the refugees.

Hallaj added that around 205,000 civilians have been displaced in Idlib since the beginning of November as a result of heavy attacks. Saying that regime forces and Russia target hospitals, schools, mosques and civil defense centers, Hallaj added, "Thereby they try to prevent the return of civilians."

The opposition's military also warned that an observation point of the Turkish Armed Forces (TSK), around 15 kilometers southeast of Maarat al-Numan, could be jeopardized if the attacks expand.

Furthermore, Assistant Secretary-General for Humanitarian Affairs and Deputy Emergency Relief Coordinator Ursula Mueller also voiced that the situation in Idlib with recurrent airstrikes of the Bashar Assad regime and its backers is "alarming." The humanitarian situation for civilians in Idlib is "worse than when the year began," she told the U.N. Security Council on Thursday.

Idlib, home to around 4 million people, is the last opposition enclave in Syria. President Recep Tayyip Erdoğan and his Russian counterpart Vladimir Putin reached an agreement in Sochi on Sept. 17, 2018, which envisaged that the cease-fire in the Idlib region was to be preserved with the withdrawal of heavy arms and radicals from the region.

Despite the Sochi deal, the regime, backed by Moscow, intensified its attacks starting on April 26 under the pretext of fighting the al-Qaida-linked Hayat Tahrir al-Sham (HTS) terrorists holed up in Idlib. Since then, the situation has gotten worse, taking more civilian lives with each passing day. The Damascus regime has repeatedly vowed to take back control of the de-escalation zone.
RELATED TOPICS