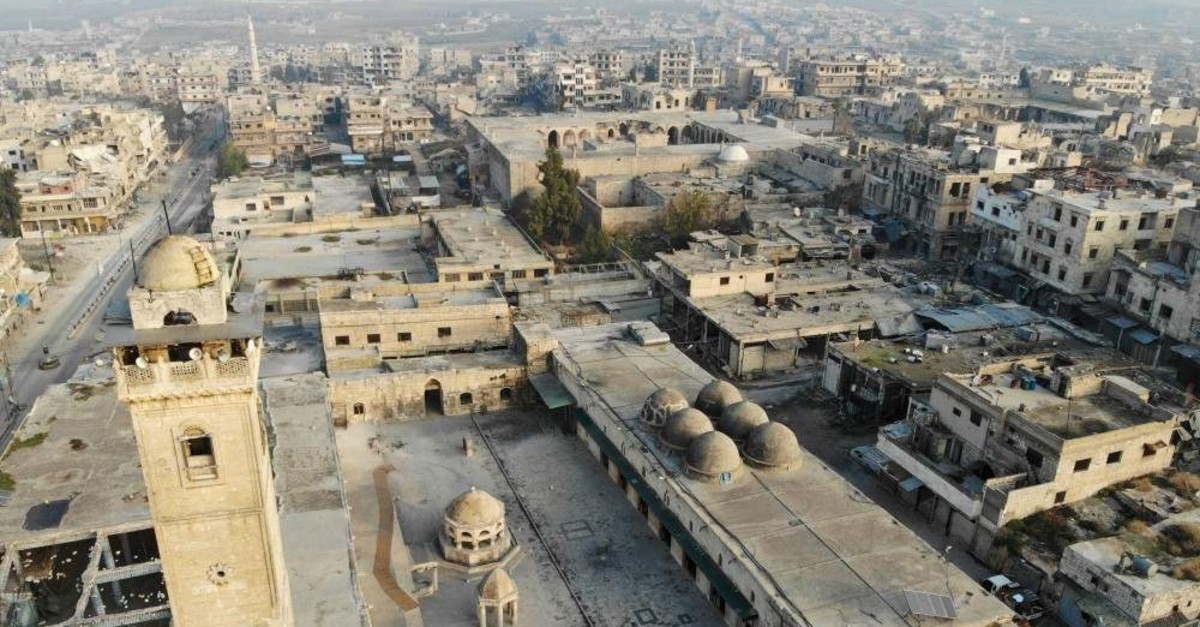 A drone picture shows the empty streets and damaged buildings in the town of Maaret Al-Numan in the northwestern Idlib province, Dec. 23, 2019 (AFP)
by Daily Sabah with Agencies Dec 24, 2019 7:29 pm

As nearly 120,000 civilians escape from violent attacks in Idlib toward the Turkish border for safety, local people keep calling on the regime and its backers to halt their airstrikes

Syria's Bashar Assad regime intensified its attacks on Syria's northwestern province of Idlib Monday, triggering a mass exodus of tens of thousands of civilians fleeing toward the Turkish border in the hope of safety.

Nearly 120,000 Syrians have fled their homes due to the bombardment in the province's southeastern Maarat al-Numan and Saraqib districts, according to local sources.

At least eight civilians, including five children, were killed in a Russian airstrike on Idlib, the White Helmets civil defense group said. It further claimed that Russian forces were targeting the escape routes to the Syrian-Turkish border. At least 215,000 civilians have been displaced since the beginning of November.

The Syrian Opposition and the Revolutionary Forces (SMDK) called on the Syrian regime and its backers to halt their attacks on Idlib. "We want our Arab brothers and friends of the Syrian people to do their best to stop the current massacre and genocide in Idlib," deputy chair of the SMDK Ikab Yahya said Monday at a press conference in Istanbul.

He added that these attacks aimed to kill and displace more than a million people and destroyed civilian infrastructure including hospitals, schools and settlements. Indicating that international support apart from some aid agencies of Turkey is limited, Yahya called on the international community to support refugees under the heavy winter conditions.

Yahya accused the Assad regime and its supporters of rejecting the solutions put forth by the international community.

The regime, which is ignoring the Astana agreements, has occupied 35 settlements within the Idlib de-escalation zone in the last four days. The regime and its allies on Monday night took control of nine more areas, including Jarjnaz, Khirbet Marata, Abu Dafna, al-Hadisa, Kafr Yasin, al-Salihiyah, Dar al-Salam, al-Falul and Babulin.

One of the regime's main targets was the town of Maarat al-Numan, which lies on a key highway linking the capital Damascus to the northern city of Aleppo. The Assad regime is apparently trying to reopen the highway that was closed by the opposition in 2012.

The intensification of Russian and Syrian regime airstrikes on southern Idlib since Dec. 16 is causing a new humanitarian catastrophe, forcing tens of thousands to flee their homes, according to the U.N. These displaced Syrians are moving toward the Turkish border and liberated areas, especially to Operation Euphrates Shield and Operation Olive Branch regions, to seek refuge.

The U.N. had reported that some 60,000 Idlib residents had already been displaced since the bombing campaign began late last month. Around 10,000 civilians fled toward Turkey only in the last two days.

"The U.N. urges all parties to ensure the protection of civilians, and to allow sustained and unhindered access by all humanitarian parties to provide life-saving assistance to all in need," the U.N. spokesman said.

"Under the roar of warplanes and the explosions of rockets, the evacuation of #MaaratAlNuman continues with catastrophic humanitarian conditions facing more than 150,000 newly-displaced people from southeast #Idlib. A ghost town, empty and devastated, this is the transformation of the once busy city of #MaaretNuman merely eight days after the bombing, with thousands of airstrikes and artillery shells," the White Helmets shared on Twitter.

Syrian troops have also nearly surrounded a Turkish observation post near the village of Surman in Idlib province, according to al-Watan and the Britain-based Syrian Observatory for Human Rights (SOHR), an opposition war monitor. Turkey has 12 observation posts in northwestern Syria, established after a deal between Moscow and Russia in 2018.

"Regime forces have surrounded the Turkish observation post in al-Surman after capturing several towns and villages, including Jarjanaz and al-Surman" in the southeast of the province, said the head of the Britain-based monitor, Rami Abdel Rahman.

Idlib, home to around 4 million people, is the last opposition enclave in Syria. Turkish President Recep Tayyip Erdoğan and his Russian counterpart Vladimir Putin reached an agreement in Sochi on Sept. 17, 2018, which envisaged that the cease-fire in the Idlib region was to be preserved with the withdrawal of heavy arms and radicals from the region.

Despite the Sochi deal, the regime, backed by Moscow, intensified its attacks starting on April 26 under the pretext of fighting the al-Qaida-linked Hayat Tahrir al-Sham (HTS) terrorists holed up in Idlib. Since then, the situation has gotten worse, taking more civilian lives with each passing day. The Damascus regime has repeatedly vowed to take back control of the de-escalation zone.

More than 1,300 civilians have been killed in attacks by the regime and Russian forces in the de-escalation zone as the cease-fire continues to be violated. If aggression by the regime and its allies continues, Turkey and Europe face the risk of another refugee influx.

The Syrian civil war, which broke out in 2011, has killed hundreds of thousands of people and forced more than 5 million people to flee the country, while more than 7 million are internally displaced.