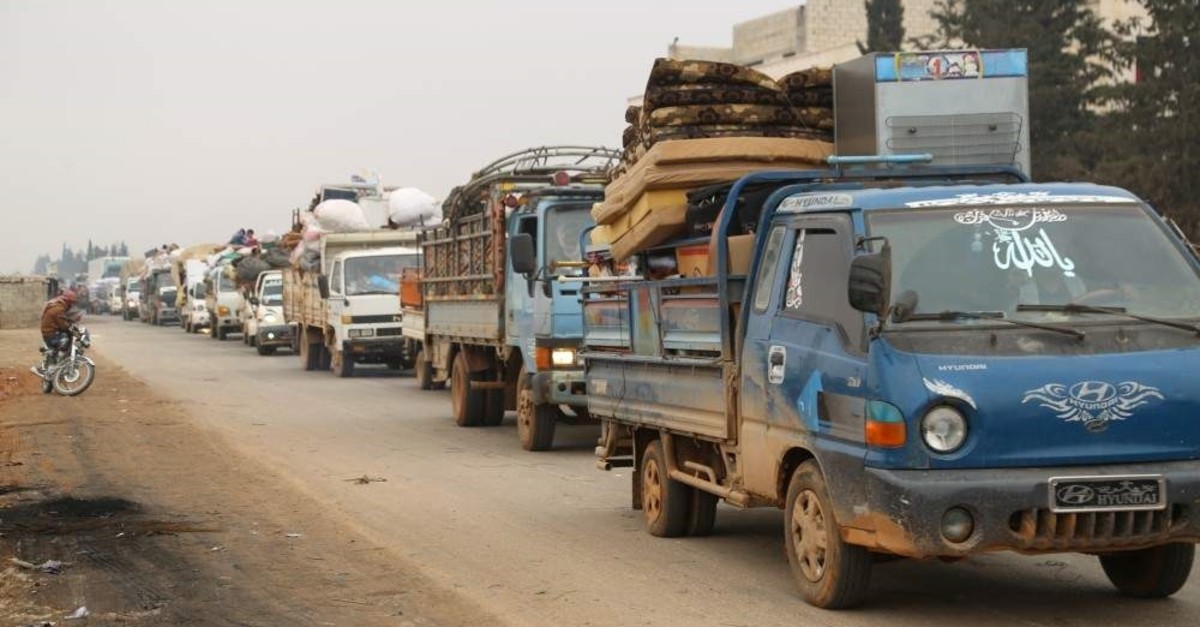 As regime forces advance toward Idlib, violent attacks targeting residential places have brought the area onto the verge of a humanitarian catastrophe that could see mass exodus toward the Turkish border

At least 10 more civilians, including six children, were killed Tuesday in airstrikes carried out by the Syrian regime and its backer Russia in northwest Syria's de-escalation zone, as Turkey and France appealed for an end to the violence that has forced tens of thousands to flee in recent days.

The Britain-based Syrian Observatory for Human Rights said the airstrikes targeted the village of Joubas, on the outskirts of the town of Saraqeb, east of the province of Idlib.

The intensified regime and Russian bombardment has hammered the opposition-controlled province of Idlib since mid-December, as regime forces make steady advances on the ground despite an August cease-fire and U.N. calls for a de-escalation.

Nearly 80 civilians have been killed by airstrikes and artillery attacks over the same period, according to the Syrian Observatory for Human Rights, which estimates that more than 40,000 people have been displaced in recent weeks.

"These attacks should come to an end immediately," the Turkish presidency's spokesman said Tuesday after Ankara sent a delegation to Moscow to discuss the flare-up.

Presidential Spokesman İbrahim Kalın said Ankara was pressing for a new cease-fire to replace the previous agreement violated by the regime.

The French Foreign Ministry also called for "an immediate de-escalation."

"The military offensive by the Damascus regime and its allies is worsening the humanitarian crisis" in Idlib, it said in a statement.

Tuesday's strikes targeted the village of Jubass near the town of Saraqeb in southern Idlib, killing civilians sheltering in a school and nearby, said the Britain-based Observatory, which has a network of contacts across Syria. The site of the attack was strewn with destroyed tents and smoking debris, reported an AFP correspondent there.

"Children are bearing the brunt of intensifying violence in northwest Syria," it said in a statement.

"More than 500 children were injured or killed in the first nine months of 2019, and at least 65 children have been killed or injured in the month of December alone," it said in a statement.

It said that recent intensified violence in areas of Maaret al-Noumaan, south of Idlib city, has pushed thousands of families to flee north.

"Since Dec. 11, more than 130,000 people, including over 60,000 children, have been displaced from southern Idlib, northern Hama and western Aleppo because of escalating fighting," the UNICEF statement said.

It noted that the displacements are adding pressure on overcrowded camps near the Syrian-Turkish border and that many families still have no shelter and are sleeping in the open air despite the cold weather.

In Maaret al-Noumaan, the Syrian American Medical Association (SAMS) said it suspended its operations in two major hospitals as the situation deteriorated in recent days.

SAMS said these hospitals had been serving around 300,000 civilians before the escalation.

The escalation came as Damascus loyalists advanced on the ground.

Since Thursday, regime forces have taken control of dozens of towns and villages in southern Idlib following battles with opposition forces.

In a statement on Tuesday, the Syrian regime said it has seized 320 square kilometers from its rivals in recent days. It pledged to continue its push until it recaptures all of Idlib, despite the ongoing humanitarian catastrophe and risk of new migration waves.

Facing the threat of further regime advances from the south, thousands of Maaret al-Numan's residents have fled northwards toward relatively safer zones near the Turkish border for protection.

Idlib, home to around 4 million people, is the last opposition enclave in Syria. Turkish President Recep Tayyip Erdoğan and his Russian counterpart Vladimir Putin reached an agreement in Sochi on Sept. 17, 2018, which envisaged that the cease-fire in the Idlib region was to be preserved with the withdrawal of heavy arms and radicals from the region.

Despite the Sochi deal, the regime, backed by Moscow, intensified its attacks starting on April 26 under the pretext of fighting the al-Qaida-linked Hayat Tahrir al-Sham (HTS) terrorists holed up in Idlib. Since then, the situation has worsened, taking more civilian lives with each passing day. The Damascus regime has repeatedly vowed to take back control of the de-escalation zone.

More than 1,300 civilians have been killed in attacks by the regime and Russian forces in the de-escalation zone as the cease-fire continues to be violated. Over 1 million Syrians have moved near the Turkish border following intense attacks. If aggression by the regime and its allies continues, Turkey and Europe face the risk of another refugee influx.

The latest spike in violence came after Russia and China on Friday vetoed a U.N. Security Council resolution that would have extended for a year cross-border aid deliveries to 4 million Syrians, many of them in Idlib.

The move raised fears that vital U.N.-funded assistance could stop entering opposition-held parts of Syria from January unless an alternative agreement is reached.

France on Tuesday called on member states of the UNSC, namely Russia and China, to renew the resolution.

"It is more imperative than ever for the United Nations to maintain the most direct and effective access to populations in need through preserving cross-border assistance," the Foreign Ministry said in a statement.

To help civilians in Syria's northwest, it said it has released additional emergency aid of just over 5 million euros to the U.N. cross-border humanitarian fund based in the Turkish city of Gaziantep.

Currently, there are four border gates that lead to various points in Syria from the neighboring countries of Turkey, Iraq and Jordan. The names of the border gates are Bab al-Salam and Bab al-Hawa in Turkey, Al-Yarubiyah in Iraq, and Al-Ramtha in Jordan. Thanks to these gates, millions of people in Syria receive humanitarian aid regularly. Turkey offered the idea of opening a new gate in southeastern Turkey for the purpose of delivering humanitarian aid, saying there should be a fifth border gate to the northern Syrian province of Tal Abyad. Russia and China, however, propose shutting down the border gates in Jordan and Iraq with the claim that they are "ineffective." The two countries also propose reviving the decision for only six months instead of a full year.

After eight years of conflict, forcible displacement and torture, Syria is one of the countries in the world in most need of humanitarian aid. Despite the efforts of many nongovernmental organizations from around the world as well as countries like Turkey, the amount of aid reaching the war-torn country is still not at the levels desired, forcing the international community to come up with new initiatives to solve the problem.

The intensification of Russian and Syrian regime airstrikes on southern Idlib since Dec. 16 is causing a new humanitarian catastrophe, forcing tens of thousands to flee their homes, according to the U.N. These displaced Syrians are moving toward the Turkish border and liberated areas, especially to Operation Euphrates Shield and Operation Olive Branch regions, to seek refuge. At least 215,000 civilians have been displaced since the beginning of November.

Turkey has frequently warned the international community of the immanence of a humanitarian disaster and a fresh wave of refugees unless action is taken and the Syrian regime is restrained. Yet, no worthwhile actions have taken place, as airstrikes and artillery continue to target thousands of civilians.

Ankara has also proposed the establishment of a safe zone in northern Syria cleared of all terrorist elements in order to allow for the resettlement of Syrians who have fled to Turkey from war-torn areas. Turkey's safe zone plan aims to host millions of Syrians in a safe and stable environment.