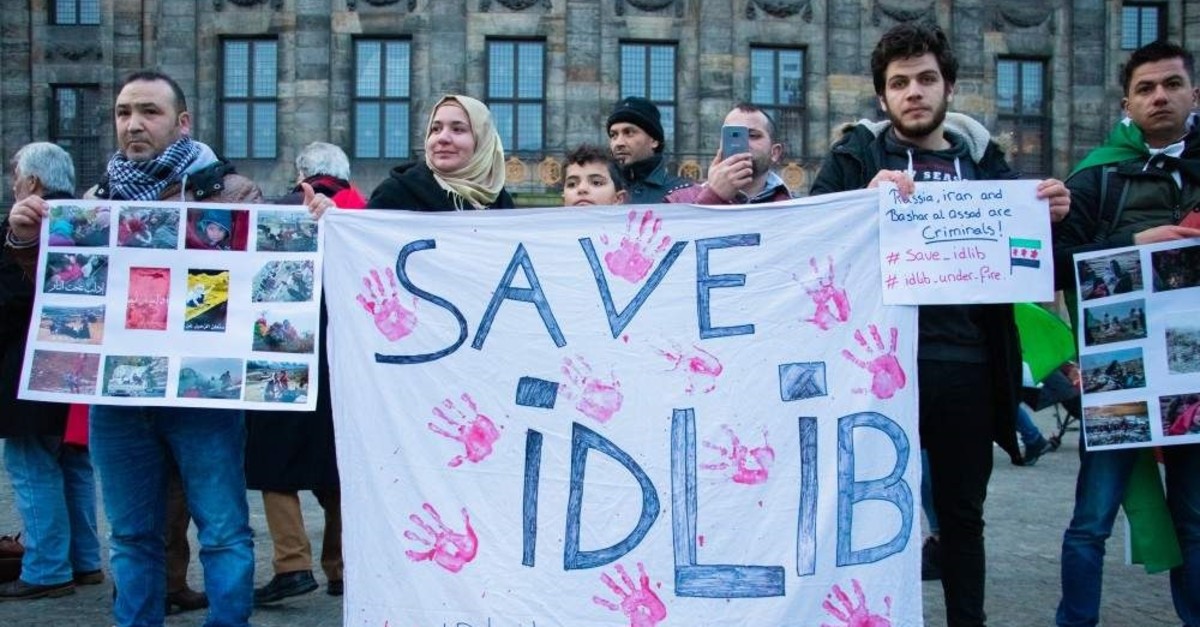 Protesters in Amsterdam were holding banners saying "Rescue Idlib," "Stop the war in Syria" and "Time's up, place Assad and Putin before the law for war crimes," referring to Russian President Vladimir Putin. People were also reacting to the fact that the international community remained silent in the face of the humanitarian disaster unfolding in the de-escalation zone.

In Brussels, around 100 Syrians gathered in front of Russia's EU permanent representation to protest the attacks. Protesters carrying Syrian flags shouted slogans saying "Murderer Putin" and "Assad has to leave."

On the other side, some 300 protesters – mostly Syrians living in Turkey – gathered close to the Russian Consulate in Istanbul, shouting "Murderer Putin, get out of Syria."

Since mid-December, regime forces and their Russian allies have heightened attacks on the southern edge of Syria, a de-escalation zone that Russia and Assad continually breach, eight years into the country's devastating war.

The United Nations said Friday that 235,000 civilians had fled their homes in opposition-held northwestern Syria during a Russian-backed campaign of airstrikes and shelling this month. The U.N. Office for the Coordination of Humanitarian Affairs (OCHA) said the exodus had taken place Dec. 12-25.

"With the latest escalation of violence in northwest Syria, civilians in Idlib governorate are again suffering from the devastating consequences of hostilities," the statement in a report said.

The OCHA said Maarat al-Numan and the surrounding countryside "are reportedly almost empty."

"NW Syria: 235,000+ displaced in the past two weeks. Winter conditions, including torrential rain, is exacerbating dire humanitarian conditions. 100,000-plus new [internally displaced persons] IDPs reported to be living in camps, unfinished buildings, in tents, and out in the open," the OCHA wrote yesterday on Twitter.

The U.N. and Turkey have been frequently urging Russia and the Assad regime to stop their attacks on the de-escalation zone, violating peace agreements; yet, both the international community and the attackers have remained silent.
RELATED TOPICS