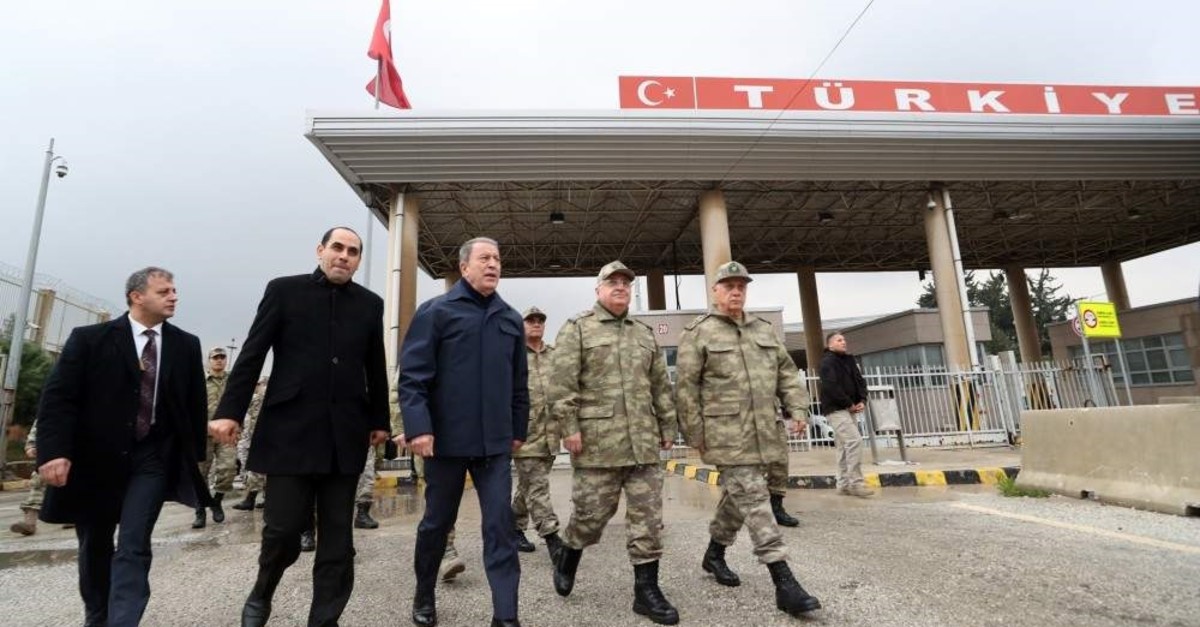 "We will not leave the 12 observation points set up to ensure the cease-fire (in Idlib)," Akar said during a visit to the border units in Hatay near the Syrian border.

After checking the border troops, the command echelon, headed by the defense minister, visited Reyhanlı to meet with commanders.

Touching upon the developments in Idlib, Akar said Turkey works day and night to prevent a humanitarian crisis in the region.

"We carry out our activities to ensure the security of the people and provide basic necessities, but the regime continues to attack innocent people despite the pledges and agreements," Akar said, adding that Turkey expects the regime to halt attacks as soon as possible and Russia to urge the regime to do so.

He continued by saying that a total of 1 million civilians, including 280,000, were forced to leave their homes in recent days, warning that such regime attacks will lead to another wave of migration.

"The troops on the observation posts are instructed to respond without hesitation if attacked or harassed," Akar said.

Akar said the Turkish military will continue to target terrorists and terrorist organizations in northern Syria and Iraq and will not allow the formation of a terrorist corridor near its borders. He noted that Turkey has fulfilled all pledges as per the deals signed with the U.S. and Russia in northern Syria and expects both countries to do the same.

Idlib, the last opposition enclave in Syria, had a prewar population of 1.5 million. The number swelled to around 3 million with new refugee waves after it was designated a "de-escalation zone" under the Astana agreement between Turkey, Russia and Iran in May 2017 that paved the way for a permanent political solution in Syria. The Turkish military set up 12 observation posts in Idlib's de-escalation zone after the ninth round of Astana-hosted peace talks.

Regarding the recent maritime deal with Libya, Akar said other countries should respect it as it is the decision of two independent countries and that the Turkish military is ready to protect Turkey's rights, interests at home or abroad.

The defense minister also strongly condemned the terrorist attack in the Somalian capital Mogadishu, as he extended condolences to the families of 80 people, including two Turkish citizens killed in the brutal attack.