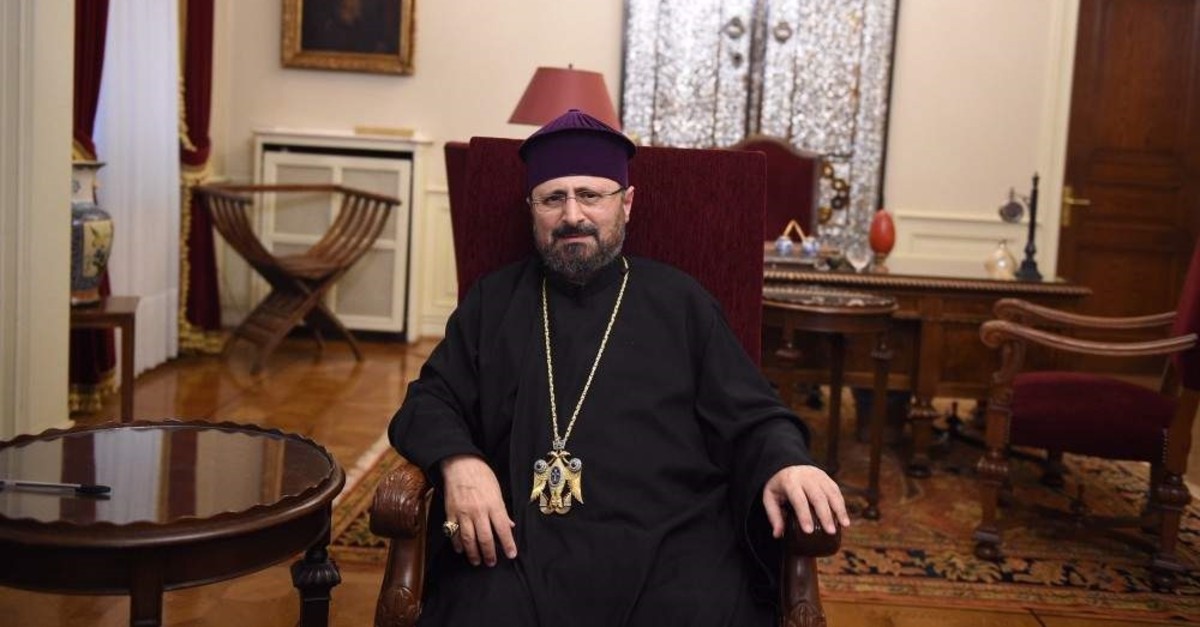 The Armenian community in Turkey appreciates reforms as it is going through one of the most comfortable periods in the history of the republic, while the diaspora exploits the idea of tragedy, said Sahak Maşalyan, who recently became the 85th Armenian patriarch.

"All minorities in Turkey agree on the fact that we are experiencing the most comfortable era during the Justice and Development Party (AK Party) administration," Maşalyan told Akşam daily, adding that the amendments made in the Foundations Law in 2008 were especially important in this regard.

Maşalyan noted that the concept of minorities has been used to interfere in Turkey's internal affairs since the Ottoman Empire.

"We do not want Turkey to be harmed in the global sphere because of this issue (of minorities). We are citizens of this country and any harm done to this country hurts us," Maşalyan said.

The newly elected patriarch also said his community was pleased about the state's interest and care, noting that they can easily contact President Recep Tayyip Erdoğan, while ministers pay frequent visits and Istanbul Gov. Ali Yerlikaya always devotes close attention to their concerns.

Maşalyan also said the Armenian community in Turkey has nothing to do with the Armenian diaspora, noting that they exploited the issue of the 1915 events as a means to unite the diaspora under a single cause.

"They realized this issue creates a sense of unity, leading to a negative societal awareness," Maşalyan said, adding that the Armenian community in Turkey chose to stay in the country and live with the rest of the people.

"Diaspora is a thing of the past," he said.

Noting that his family was the only Armenian family in Istanbul's Bayrampaşa district throughout his childhood, Maşalyan said they never felt discriminated against nor experienced any problems.

"We lived without having any religious problems, and I grew up listening to the adhan, the call for prayer, five times a day," he said.

The patriarch also said he hopes the 90-year-old issue of legal entity is resolved soon so the patriarchate can unite 38 Armenian churches in the country under the same leadership. He noted that he has spoken with Interior Minister Süleyman Soylu, who told him that the government would discuss it after the community reaches a consensus on the matter.

Sahak Maşalyan became the 85th Patriarch of Turkey's Armenians in December after winning the election held in Armenian Gregorian churches across the country.

The elections came after a long period of uncertainty and mourning following the death of Mesrob II, the revered head of the patriarchate of Turkey's Armenians who passed away on March 8 after an 11-year fight against dementia.

Born in Istanbul's Bayrampaşa district in 1962, Maşalyan graduated from Istanbul University's philosophy department and decided to become a priest in 1982. After becoming a high priest (vertaped) in 1984, he was then promoted to deacon (sargavak) in 1986 by then-Patriarch Şnork Kalutsyan.

After receiving a master's degree in spirituality in 1999 from Milltown Institute of Philosophy and Theology in Dublin, Maşalyan returned to Turkey and began serving as a preacher and spiritual counselor in Istanbul's Kınalıada, Kumkapı Dışı Surp Harutyun, Gedikpaşa and Galata churches.

Following the mourning process over Mesrob II's death, the absence of the new head of the church stirred unrest and controversy among the community. Even long before the death of Mesrob II, when his health problems began in 2008, many called for an election, including Ateşyan and his dissidents.

However, the Turkish state – which has authority over elections – would not authorize a replacement for the patriarchate while he was still alive. Instead, Ateşyan was appointed as acting head of the church in 2010, since Mutafyan was not able to perform his duties due to illness.

The decision for an election was finally made in 2016 after requests from the community. Karekin Bekchivan was elected as the governor of the patriarchate in order to make the election process run smoothly; however, Ateşyan did not resign from his duty despite the beginning of the election process. The process, which was halted after Bekhcivan left Turkey following disputes between him and the Istanbul governorship, relaunched with the death of Mesrob II.

The Orthodox Patriarchate and its large congregation in Istanbul trace their roots back to the conquest of the city by the Ottomans and Mehmed II (Mehmed the Conqueror), who is credited with paving the way for the establishment of a patriarchate. Before the sultan granted them religious freedom, Armenians were forced to pray in the Byzantine churches of other communities in the city.

The patriarchate was an influential religious authority for Armenian communities around the world until the early 20th century, but its influence has decreased over time, especially after the Armenian population in Turkey diminished following World War I and after the collapse of the Ottoman Empire.