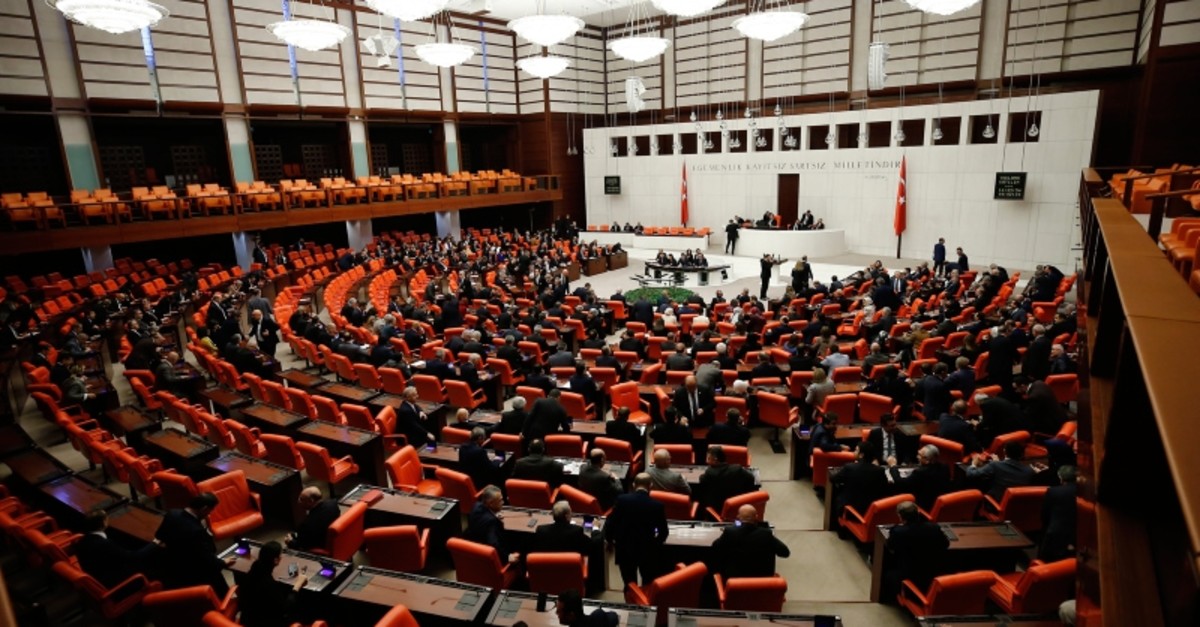 The Turkish Parliament approved the mandate to send troops to Libya on Thursday in favor of the conflicted country's U.N.-backed Government of National Accord (GNA) upon a formal request for military support from Turkey.

The Turkish Grand National Assembly (TBMM) held an emergency meeting to discuss the Libya mandate foreseeing the sending of Turkish troops to the country. The assembly headed by Parliament Speaker Mustafa Şentop had only one item on the agenda, while political parties had 20 minutes each to speak following the reading of the mandate. At the end of the session, the mandate was approved by receiving a majority of the votes. A total of 509 parliamentarians participated in the voting, 325 of whom voted for the resolution while 184 voted against.

President Recep Tayyip Erdoğan signed a two-page resolution on Monday, stating that developments in Libya posed a threat to the region and asking for permission to deploy Turkish forces to foreign countries to intervene in conflicts outside the borders of Turkey for a period of one year.

"Libya's Government of National Accord has asked Turkey for military support to combat threats toward Libya's territorial integrity and stability that could affect the whole region, in the form of Daesh, al-Qaida and other terrorist organizations or illegal armed groups as well as illegal migration and human trafficking," the mandate said. The statement added that Turkey aims to deliver humanitarian aid to Libya's people and to protect and defend Turkey's threatened interests.

Most of opposition votes against mandate

The head of the CHP, Kemal Kılıçdaroğlu, said Thursday that Turkey should prioritize diplomatic efforts to try to end the conflict in the war-torn country while stating that the U.N. is the one that has to send its peacekeeping troops to the region.

İP head Meral Akşener also said Thursday that the party decided to vote against the mandate following a democratic agreement among party members. She said they, as the İP, support any efforts to mediate between the parties of Libya but sending troops would mean taking sides in the conflict.

The Felicity Party (SP), on the other hand, said although they support the maritime deal with Libya, they will cautiously approach the memorandum for sending troops, adding that if the move can be calculated properly, the presence of the Turkish soldiers alone in the region may prevent further missteps in Libya. Yet, despite the party's statement, the only two SP deputies could not agree on how to vote. As a result, one decided to skip the voting session completely, while the other voted in favor of the memorandum.

The GNA recently made a formal request for Turkish military support in the "air, ground and sea" to help fend off an offensive by warlord Khalifa Haftar's forces, who are attempting to take control of the capital Tripoli. Turkey supports the U.N.-backed government against the militia and mercenaries of the latter self-proclaimed military chief.

"No matter who is involved, no plan in the region that excludes Turkey has any chance of success," Vice President Fuat Oktay said during an Anadolu Agency broadcast Wednesday. Responding to those asking what Turkey is doing in Cyprus and Libya, Oktay added that Turkey foiled the plans of others who were trying to exclude Ankara from the Mediterranean. "Through signing the maritime pact with Libya, Turkey foiled the plot to confine Turkey to land," he said.

Oktay said: "We hope that it will receive approval. The mandate is valid for a year, and (troops) can be sent whenever needed in the number needed. If the content of the Libya mandate is examined, it authorizes everything from humanitarian aid to military support." He added that this was a peace project embarked on in the name of peace in the region.

"We hope that there is no need for such an invitation – and that it will have a deterrent role so that the relevant parties will understand this message correctly," he stressed, referring to the GNA's request for help from Turkey.

Last month, Turkey's Parliament approved a security and military deal with Libya's GNA. The deal went into effect recently, having been published in the country's Official Gazette. The deal allows Turkey to provide military training and equipment at the request of the Libyan government, which controls the capital, Tripoli, and some of the country's western regions. "By sending out our drillships, Fatih, Yavuz and Barbaros, Turkey has foiled the plans of Greece and Southern Cyprus to exclude the Turkish community in Northern Cyprus and ignore the rights of Turkey and the Turkish Republic of Northern Cyprus (TRNC) by using the hydrocarbon resources of the region in a way that benefits their interests alone through agreements made with other Mediterranean neighbors such as Egypt, Lebanon and Israel," Oktay said, stating that Turkey would be ready to take risks if needed.

Since the ousting and death of longterm dictator, Moammar Gadhafi, in 2011, two seats of power have emerged in Libya. Turkey, Qatar and Italy have allied with Fayez al-Sarraj's government based in Tripoli, while France, Russia and a number of key Arab states, including Egypt, the United Arab Emirates and Saudi Arabia are backing Haftar, who commands forces based in eastern Libya.

Stating that Turkey's stance regarding the situation in Libya was clear, Oktay said, "Turkey has joint interests in protecting peace in both Libya and the region. We cannot allow for further instability here."

The vice president elaborated that the Turkish army was ready to go to Libya whenever needed, adding that Turkey would share its views on Libya on every platform with high-level interlocutors.

"Our president is communicating with both (Russian President Vladimir) Putin and (U.S. President Donald) Trump, as well as with what we call the quadrilateral summit, with (U.K. Prime Minister Boris) Johnson, (German Chancellor Angela) Merkel and (French President Emmanuel) Macron," Oktay said.

Sending troops to foreign countries is not a new move for Turkey as the country's military is currently present in 11 countries around the world. These countries include Afghanistan, Somalia, Qatar, Iraq, Azerbaijan, Syria, the Turkish Republic of Northern Cyprus (TRNC), Albania, Lebanon, Bosnia-Herzegovina and Kosovo.

The biggest Turkish military base outside of Turkey is located in Somalia, where 200 soldiers are stationed. In Azerbaijan, there are 70 Turkish soldiers on duty, providing training for the Azeri military.

The largest number of Turkish military bases on foreign soil is in Iraq, providing training support for the fight against the Daesh terrorist group.

In Lebanon, 100 Turkish soldiers are present under the scope of U.N. peacekeeping forces.

Qatar, on the other hand, hosts a Turkish military base with 3,000 personnel and 300 Turkish soldiers.