Turkey to benefit from regional stability in Mediterranean, unity of Libya 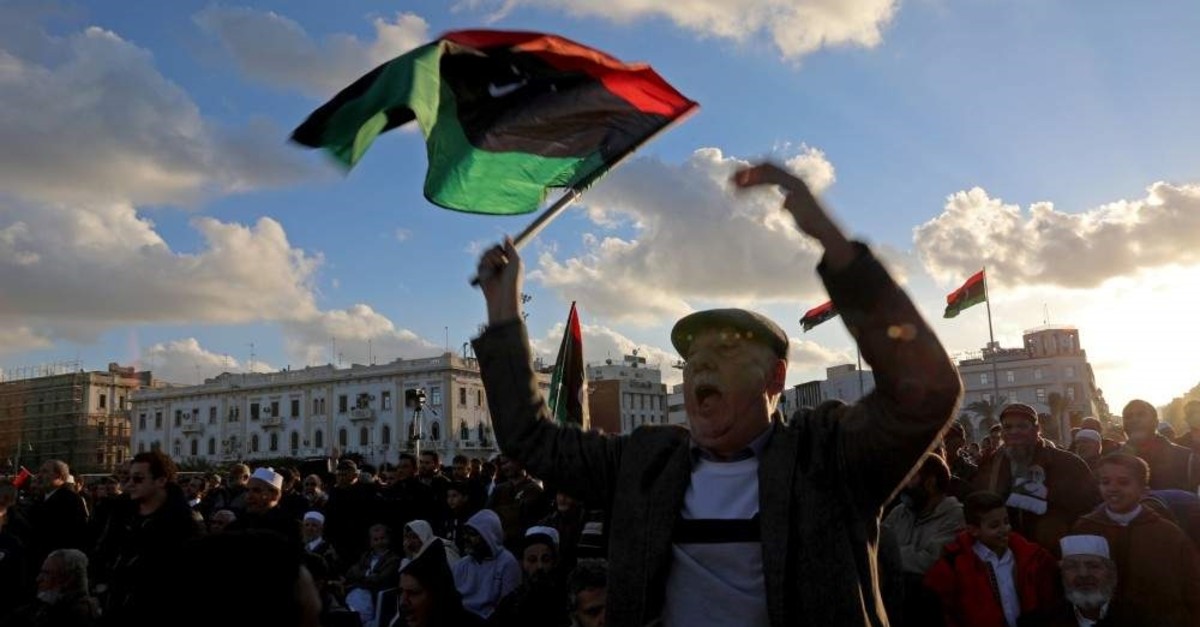 Libyan protesters shout slogans during a demonstration to demand an end to Khalifa Haftar's offensive against Tripoli, in Martyrs' Square in central Tripoli, Libya, Dec. 27, 2019. REUTERS
by Jan 03, 2020 6:13 pm

Approving the mandate to send troops to the U.N.-recognized government in Libya, Turkey is determined to provide stability in the region and facilitate a cease-fire in the country

Turkey, with its recent strategic moves and cooperation with the Government of National Accord (GNA), is determined to benefit from the unity and solidarity of Libya while protecting the interests of both countries in the region.

Speaking to Daily Sabah, Turkey's special envoy for Libya Emrullah İşler stated: "The official government has faced serious attacks, especially in the past days, as a result of (Khalifa) Haftar's nine-month-long assaults and foreign support, thus it has made requests to five countries with which it has security agreements – the U.S., U.K., Italy, Algeria and Turkey being the countries that answered this request."

The Turkish Grand National Assembly (TBMM) held an emergency meeting Thursday to discuss the Libyan mandate foreseeing the sending of Turkish troops to the country in the face of the deteriorating humanitarian situation in the country and to prevent an irrecoverable state in the future.

The Parliament assembly, headed by Parliament Speaker Mustafa Şentop, had only one item on the agenda, while political parties had 20 minutes each to speak following the reading of the mandate. At the end of the session, the mandate was approved by a majority of the votes. A total of 509 parliamentarians participated in the voting, 325 of whom voted for the resolution, while 184 voted against.

"Now we will send our military force there, I think of this as a deterrent move. Of course, if there will be an attack on our forces, they will get their response in the strongest way. Our sending of troops would result in a cease-fire in the shortest time. Our only desire is that the conflict and bloodshed ends. Libya has to get a democratic system by experiencing a transition period," İşler said, indicating that one side supports an illegal actor in all ways, including financially and with weapons.

"I can easily say that Haftar and his kind will have no future in Libya. I believe that freedoms, rights and democracy will spread in this century," İşler added.

"Libya's Government of National Accord has asked Turkey for military support to combat threats toward Libya's territorial integrity and stability that could affect the whole region in the form of Daesh, al-Qaida and other terrorist organizations or illegal armed groups as well as illegal migration and human trafficking," the mandate said. The statement added that Turkey aims to deliver humanitarian aid to Libya's people and to protect and defend Turkey's threatened interests.

Last month, Turkey's Parliament approved a security and military deal with Libya's GNA. The deal went into effect recently, having been published in the country's Official Gazette. The deal allows Turkey to provide military training and equipment at the request of the Libyan government, which controls the capital, Tripoli, and some of the country's western regions.

"Since news of the potential agreement being signed by Turkey and Libya a few weeks ago, the Egyptian, UAE and French coalition have intensified their attacks on Tripoli, especially on civilian areas and this has led to an increase in casualties. Indeed, yesterday while the Turkish Parliament was debating and voting on the agreement or the request to militarily assist Libya, there was a very strong assault on Tripoli. But looking at the diplomatic responses from these countries, which are attacking Libya, it's quite obvious that they are very nervous and are extremely unhappy with the Turkish move," Ahmed Sewehli, a Libyan activist told Daily Sabah.

Communications Director Fahrettin Altun underlined on Twitter that the deal between Turkey and Libya is the best guarantee for regional security and stability. "Turkey will work toward defending international law, achieving security and preserving peace in Libya & the Eastern Mediterranean. We will prevent any effort to exploit the conflict in the region. At the same time, we are also ready to cooperate on establishing stability!" he said.

Welcoming the ratified mandate, Presidential Spokesman İbrahim Kalın wrote on Twitter: "Turkey will continue to be strong in the field and at the table. The Libyan troop's deployment motion ratified in the Turkish Parliament is an important step taken to ensure peace and stability in Libya and to protect the interests of our country in North Africa and the Mediterranean."

The decision of the TBMM was published on the Official Gazette Friday, reminding that following the incidents of 2011 in Libya, efforts to build democratic institutions were disrupted by increasing armed groups, creating a fragmented structure in the country.

Libya's High Council of State, a body formed to end the civil war in the country in 2015, welcomed Thursday the passage of the mandate in a written statement saying "Countries such as the United Arab Emirates, Egypt, Russia and France support the war criminal Haftar, who has killed and tortured our people and committed destruction. This prompted us to seek legitimate support from our Turkish friends to protect our people. We welcome the adoption of the motion in Turkey's Parliament."

The GNA recently made a formal request for Turkish military support in the "air, ground and sea" to help fend off an offensive by warlord Khalifa Haftar's forces, who are attempting to take control of the capital Tripoli. Turkey supports the U.N.-backed government against the militia and mercenaries of the latter self-proclaimed military chief.

On the other side, flights in Mitiga Airport, a key outlet for the civilians of Tripoli and Western Libya, had been suspended Friday for a period of time due to shelling and airstrikes. Mitiga Airport has been repeatedly closed and reopened in recent years because of the ongoing conflict.

"If Turkey uses airpower then that would be a major deterrent. The reason is that without the air power of the UAE and Egypt, Haftar would not have been able to attack Tripoli," Sewehli added.

Libyans in the capital, afraid of a massacre by Haftar, who vowed to take the capital, are awaiting the arrival of Turkish troops following the news of the Parliament vote.

Libya's U.N.-recognized GNA needed a country to support it militarily against counter-attacks on Tripoli. Turkey needed to expand the horizons of the GNA to protect their investments and interests," Tripoli resident Ahmed Ali told Anadolu Agency. "This agreement between the two countries was greeted positively by the Libyan people, as it takes into account the common interests."

Saying that although there is no legitimacy for Haftar militants allied with many countries that provide financial support as well as sending weapons, he said it was inevitable for the GNA to reach an agreement with Turkey.

"Libyans, and especially the residents of Tripoli, know well the crimes committed in Benghazi, Derna and many other regions by the militants who tried to capture Tripoli for three years," Ali said, referring to a possible massacre by Haftar's militants in the capital if it is captured.

Meanwhile, several countries have voiced their opposition and "strong concern" to Turkey's decision of military deployment, among them Russia, Greece, Israel, Greek Cyprus and the EU.

Leonid Slutsky, chairman of the State Duma Committee on International Affairs, told reporters Thursday that military intervention is certainly not the best option to resolve the crisis in Libya and that Russia has always supported a diplomatic solution. Yet, Russia has been criticized frequently by Turkey for providing support to the warlord Haftar.

"Turkey opposes every military interference in Libya that does not have the agreement of the internationally recognized and legitimate U.N.-backed government. Such foreign interferences will be the biggest reason for further instability in the region," Altun stated on Twitter.

Saying that some countries are "trying to put their narrow interests above international peace and security in the Mediterranean," Altun added, "any agreement struck with a group other than the legitimate government in Tripoli will drag the country further into chaos."

Speaking on the discontent of other countries, Sewehli stated: "But looking at the diplomatic responses from these countries which are attacking Libya it's quite obvious that they are very nervous and are extremely unhappy with the Turkish intervention. The reason behind this is that basically they had an open goal and an open field to do what they want without any forces except the untrained local forces who have very little weaponry stopping them."

Since the ousting and death of the long-term dictator, Moammar Gadhafi, in 2011, two seats of power have emerged in Libya. Turkey, Qatar and Italy have allied with Fayez al-Sarraj's government based in Tripoli, while France, Russia and a number of key Arab states, including Egypt, the United Arab Emirates and Saudi Arabia are backing Haftar, who commands forces based in eastern Libya.

"Libya is Turkey's strongest partner. Haftar has a huge coalition supporting him, we also need a coalition. 70% of people in Libya favor Turkey's presence," Libyan High Council of State (HCS) head Khalid Al-Mishri stated Friday during a panel on Libya organized by the Foundation for Political, Economic and Social Research (SETA) in Ankara, adding that the cooperation between Turkey and Libya is a strategic one not limited to current relations but also for the future.
RELATED TOPICS