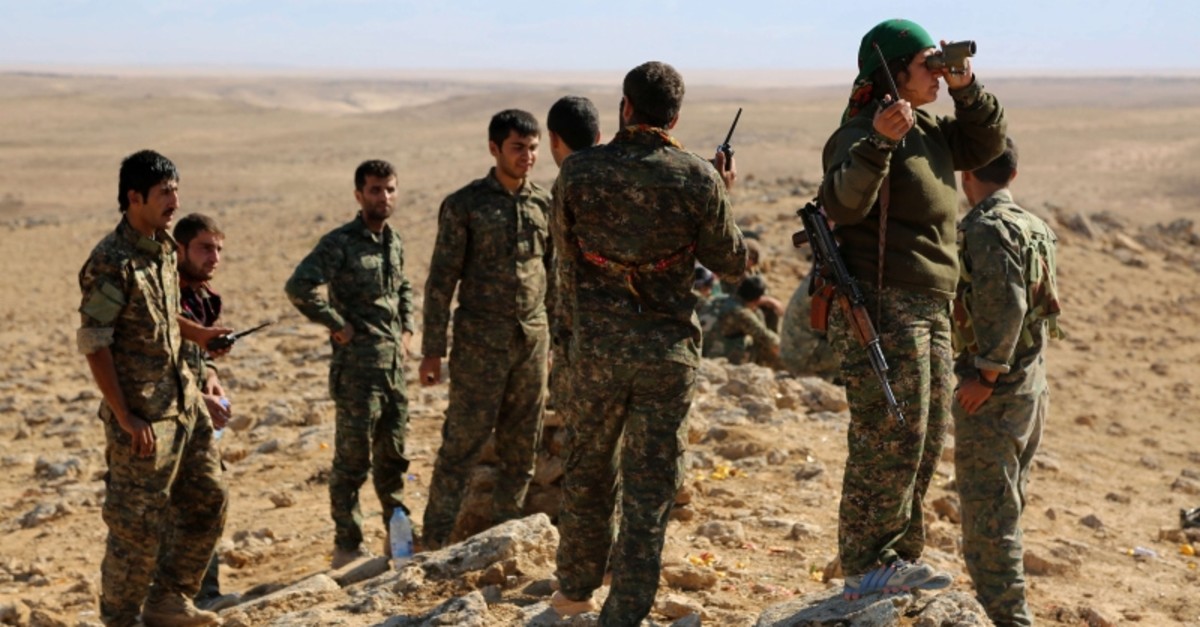 A group of YPG terrorists monitoring the area in al-Hol in the Syrian Hasakeh province, some 650 kms northeast of Damascus, near the Iraqi border on November 2, 2015. (AFP Photo)
by Daily Sabah with AA Jan 06, 2020 1:47 pm
The PKK's Syrian affiliate YPG has released at least 1,000 Daesh terrorists and family members from northern Syria's prisons and al-Hol camp in the last two months, according to Anadolu Agency (AA).

According to local sources, the YPG recently released 400 people comprised of Daesh members and their families from al-Hol camp situated in Syria's Hasakah province after regional Arab tribes stood for guarantee. AA has reportedly acquired a list with the names of those released from the camp.

The YPG continues to have a mixed relationship with Daesh, with ties between the groups fluctuating from open hostility to cooperation. Reports stating that Daesh terrorists are being released from YPG prisons and camps have been circulating in the media for a while. The latest of these reports came on Nov. 17 as Turkey's Defense Ministry claimed that the terrorist group had released over 800 Daesh prisoners in Tal Abyad in Syria.

The terrorist organization had thereby tried to blackmail the U.S. and Western countries for Turkey to halt Operation Peace Spring, which was launched on Oct.9 in northern Syria to rid the area of terrorists and create a safe environment for Syrian refugees to return.

The camp is a holding place for civilians who escaped the conflict in Deir el-Zour, along with the families of former Daesh members who surrendered and captured terrorists. Most of the civilians were forcefully brought to the camp by the YPG in April 2017, according to reports.

Several human rights organizations including the U.N. have repeatedly warned that conditions at the al-Hol camp are worsening every day and have demanded access to the centers where the families of former Daesh members are being held. The main problems of the camps are unhygienic sinks and shower cabins, torn tents, expired food and the lack of medicine for those suffering from chronic diseases. Although the capacity of the camps is 10,000 people, according to the U.N. the number is seven or eight times higher than that, consisting mainly of women and children. Thousands of foreign terrorist fighters from nearly 50 countries are being held in the camp as well as a large number of Syrian and Iraqi terrorists.
RELATED TOPICS