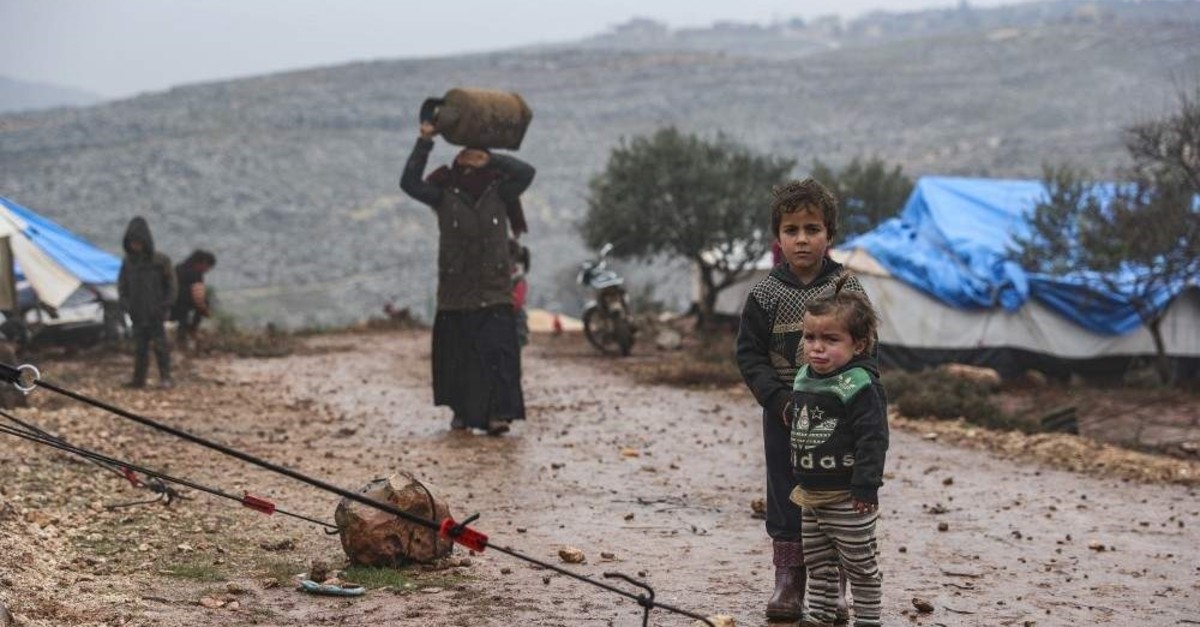 Families fleeing the attacks of the Assad regime and Russia live in poor conditions and are in dire need of humanitarian aid for survival. (AA Photo)
by Dilara Aslan Jan 12, 2020 5:10 pm

The global community, which has failed to find a solution to the Syrian crisis in the past nine years, needs to adopt concrete measures to improve inhumane living conditions for Syrians

The global community is underperforming in response to what is described as the worst humanitarian disaster of the century by the United Nations, as the rate of their aid assistance only meets a mere 5% of the need, Mouhamad Hassno, the head of the Syrian NGO Assistance Coordination Unit (ACU) said.

Speaking to Daily Sabah, Hassno said the situation in northern Syria, especially in Idlib, is tragic and catastrophic, warning that the situation, if not immediately addressed, threatens to be a human time bomb, "especially after the recent wave of forced displacement in a horrific environment of bombing, killing, displacement and poverty, and in cold weather conditions, coinciding with the shortage of local resources for organizations and a clear international indifference."

Turkey and the U.N. have frequently urged the global community to take action regarding the crisis in Syria as every day is a scene of chaos for civilians. According to the Syrian Observatory for Human Rights (SOHR), nearly 585,000 people have been killed since the beginning of the Syrian crisis, including 111 Turkish soldiers. Turkey has been striving to establish a safe zone for the displaced Syrians to live in a peaceful and stabilized environment but has again failed to receive any support from other countries.

"Unfortunately, the international response to the needs fall shy and never satisfy, not exceeding 5% of the needs. Most of it relies mainly on local resources and community initiatives in addition to Turkish institutions, such as (Turkey's Disaster and Emergency Management Authority) AFAD and the Turkish Red Crescent (Kızılay) and Syrian NGOs," Hassno added.

More than 571 ACU staff members have been working inside Syria, making up 93% of the total ACU employees, while the group reaches 12 governorates, including besieged areas and neighboring countries. Hassno explained that the ACU constantly seeks to provide states, U.N. agencies, NGOs and Turkish and Syrian organizations with status, displacement and need reports, through its network of enumerators who cover all areas outside the control of the Syrian regime. The ACU has a strategic partnership with the Turkish foreign ministry, AFAD and Turkish health directorates while it reports regularly to these Turkish institutions on the movement of displacement, geographical distribution, numbers and age groups, needs, and priorities.

Humanitarian aid organizations in Syria have been working under harsh conditions, often themselves becoming the target of Russian airstrikes and Assad's regime attacks. Since the civil war broke out in 2011, 979 humanitarian aid workers have lost their lives, apart from the tens of thousands of civilians that have died and those who continue to be in dire humanitarian situations. According to the Syrian Network for Human Rights (SNHR), 882 aid workers died in Assad regime attacks and 97 in Russian attacks as of Dec. 20.

Similarly criticizing the global community of inaction, the SOHR in a report underlined that nine years have passed while the international community was unable to save the lives of innocent civilians. The war monitor "renews its assurances that all the suffering of the Syrians and the repercussions over the region and the world could have been avoided if the international community had shown a genuine will to interfere and put pressure on the regime, its supporters, other parties of the conflict and their supporters, in order to stop shedding the blood of Syrians."

Regarding the latest escalation in the northwestern Idlib province, which has seen a surge in violence recently due to the intensified attacks of the Assad regime and its backers, Hassno said: "ACU enumerators were recently able to track 287,136 displaced people who were forcibly displaced from the southern and eastern Idlib countryside, of whom 54,282 have settled in the border areas of Idlib and Aleppo provinces, and some of them have resorted to border camps."

Russia and the Syrian regime often attack the Idlib de-escalation zone under the pretext of fighting the al-Qaida-linked Hayat Tahrir al-Sham (HTS) terrorists holed up in Idlib.

"Regarding the pretexts of Russia and the regime that terrorist groups exist in Idlib, they are flimsy pretexts in Daraa, Homs and rural Damascus, there were no terrorist groups, during the years and specifically, the past days, most of the people who were displaced and bombed are civil groups, women and children who are indigenous to the country," Hassno elaborated, noting, however, that it cannot be denied that there is a small presence of extremist groups.

"The presence of some elements of the local population loyal to these groups has several motives – the dictatorial rule by the father and son, the sectarian discrimination of the Syrian regime, the silence of the international community and the secular extremism resulting from the politics of Islamophobia, in addition to personal motives and the desire for influence and domination."

The United Nations Security Council on Friday voted to extend humanitarian aid to Syria. But, under pressure from Syrian regime ally Russia, it scaled back the program that allows the U.N. and its partners to deliver aid using border crossings not controlled by the Damascus regime.

Similar problems had occurred last year as well, once again due to disagreements by Russia and China. Yet, the disagreements were resolved with both countries abstaining from a vote.

The council on Friday agreed to prolong the assistance for only six months instead of renewing it for a year as it had done previously. It also decided that the aid will enter Syria through just two crossing points along the Turkish border, instead of four. Since 2014, the Security Council had sent aid through four border crossings – Bab al-Salam and Bab al-Hawa in Turkey, al-Yarubiyah in Iraq and al-Ramtha in Jordan. According to the U.N., around 30,000 U.N. aid trucks had gone into Syria through the crossings since the operation began.

Yet, despite the restrictions on this year's resolution, civilians in Idlib felt rather relieved. "I was so pleased when I heard the news this morning," said Abu Abdo, an unemployed father of four.

The 36-year old said he, like millions of Idlib residents who rely on cross-border aid entering from Turkey, depend on humanitarian assistance for his and his family's survival.

"I live off this assistance," he told AFP, saying continued aid deliveries would mean that he would not "die from hunger."

The U.N. Office for the Coordination of Humanitarian Affairs said Friday 4 million Syrians are being supported by cross-border operations, 2.7 million of them in the northwest and another 1.3 million in the northeast.

Previously, Turkey had said there should be a fifth border gate to the northern Syrian province of Tal Abyad, to increase the capacity of humanitarian aid to Syria. Russia, however, had opposed the idea, suggesting to decrease the number of border gates to just two.

"Without the cross-border operation, we would see an immediate end of aid supporting millions of civilians," U.N. humanitarian chief Mark Lowcock told the U.N. Security Council in November, stressing the necessity of this resolution, "That would cause a rapid increase in hunger and disease. A lot more people would flood across the borders, making an existing crisis even worse in the region."