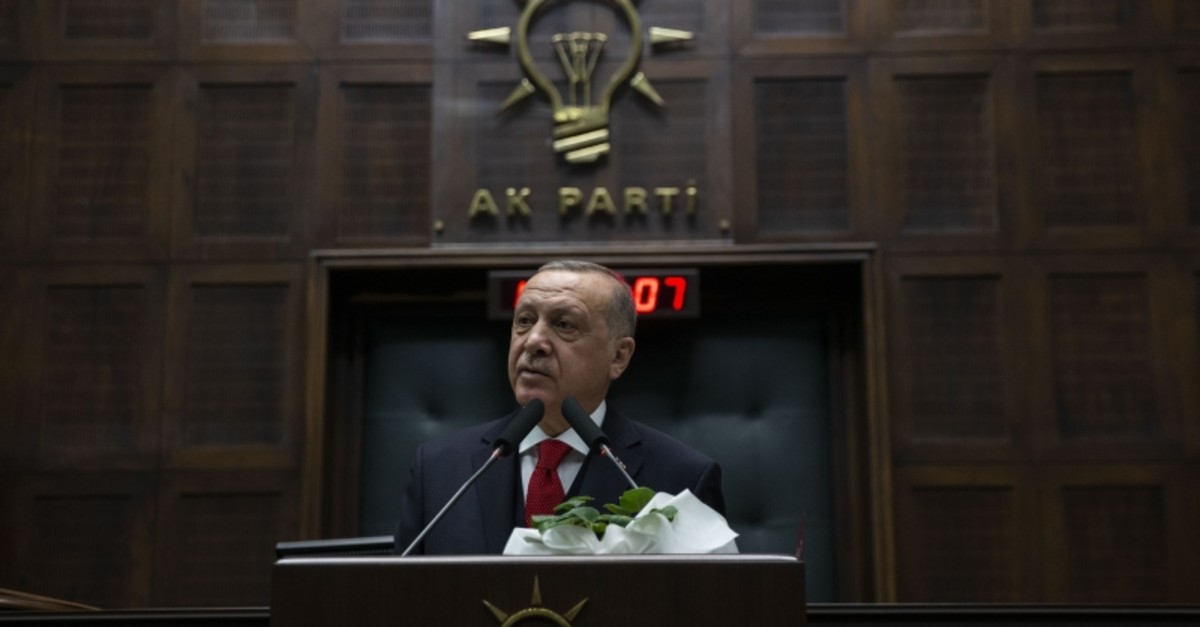 Turkey will "teach a lesson" to Khalifa Haftar and his rebel forces in eastern Libya if they continue their attacks against Libya's internationally recognized government after abandoning cease-fire talks in Moscow, President Recep Tayyip Erdoğan said Tuesday.

Speaking at the ruling Justice and Development Party's (AK Party) meeting in the capital Ankara, Erdoğan said that Haftar ran away from Moscow after Monday's indirect peace talks between him and the head of the Tripoli-based government, Fayez al-Sarraj, while Libya's U.N.-recognized government was conciliatory.

"The putschist Haftar did not sign the cease-fire. He first said yes, but later, unfortunately, he left Moscow, he fled Moscow," Erdoğan said.

"We will not hesitate to teach a deserved lesson to the putschist Haftar if he continues his attacks on the country's legitimate administration and our brothers in Libya," he added.

Haftar left Moscow on Tuesday without signing a peace deal aimed at ending nine months of fighting with the U.N.-backed government in Tripoli, following Turkey and Russia's joint efforts for a political solution.

His failure to sign the agreement during talks mediated by Turkey and Russia runs the risk of seriously damaging diplomatic efforts and peace attempts to stabilize the situation in Libya, which has been mired in chaos since the toppling of Muammar Gaddafi in 2011.

"Despite this, we find the talks in Moscow were positive as they showed the true face of the putschist Haftar to the international community," Erdoğan said.

Erdoğan also said the issue would now be discussed at talks in Berlin Sunday attended by European, North African and Middle Eastern countries, as well as the U.N., E.U., Africa Union and Arab League.

Turkey will join Germany, Britain and Russia at a summit in Berlin Sunday where Chancellor Angela Merkel is set to host discussions regarding Libya.

Erdoğan said that if Turkey had not stepped in, putschist Haftar would have taken complete control of the country, trapping its people in "claws of persecution."

Also touching upon the presence of Turkish troops in Libya, Erdoğan said Turkey is not after adventure in Libya or the Mediterranean.

"We have no imperial desires nor are we blinded with greed for oil or money. Our sole purpose is to protect our and our brothers' rights and future," the president said, saying that Turkey had deep historical and social ties with the North African country.

"In addition to our Arab brothers Haftar plans to murder, there are also over 1 million Ottoman descendants Kuloğlu Turks there," Erdoğan said.

The internationally recognized government's Foreign Ministry said Tuesday that Russia informed them they will force Hafter to sign the agreement.

After leaving Moscow, Libyan Prime Minister Sarraj came to Istanbul and met with U.S. Ambassador to Turkey David Satterfield. Satterfield affirmed the U.S.' commitment to the current cease-fire brokered by Russia and Turkey and support for the Berlin peace conference.