One of the largest residential areas of Tal Abyad, Syria, recently liberated from terrorists in a Turkish cross-border operation, regained access to drinking water thanks to Turkey's support.

The governor's office of Turkey's southeastern Şanlıurfa province bordering Syria said in a statement that the basic needs of people are being met through the Syria Support and Coordination Center (SUDKOM), a division of the governor's office. 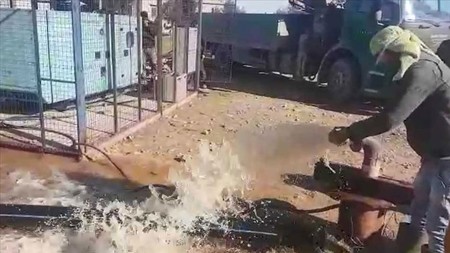 It added that some rural areas cleared of YPG/PKK terrorists have been deprived of services for 25 years, lacking any roads or proper drinking water.

SUDKOM spearheaded efforts to reestablish wells for the people of Alibecliye, Tal Abyad.

With support from related Turkish public institutions, the city was again provided with electricity and well water.

Residents of Alibecliye said the terror group damaged the electricity transformers and wells before leaving the region.

On Oct. 22, Ankara and Moscow reached a deal under which YPG/PKK terrorists would pull back 30 kilometers (18.6 miles) south of Turkey's border, and security forces from Turkey and Russia would carry out mount joint patrols there.

In its more than 30-year terror campaign against Turkey, the PKK -- listed as a terrorist organization by Turkey, the U.S. and the European Union -- has been responsible for the deaths of 40,000 people, including women, children, and infants. The YPG is its Syrian offshoot.

Share on Facebook Share on Twitter
Previous in Politics A Turkish soldier and a security guard participating in counterterror... Next in Politics Another family has joined the sit-in protest in front of the pro-PKK...
DAILY SABAH RECOMMENDS