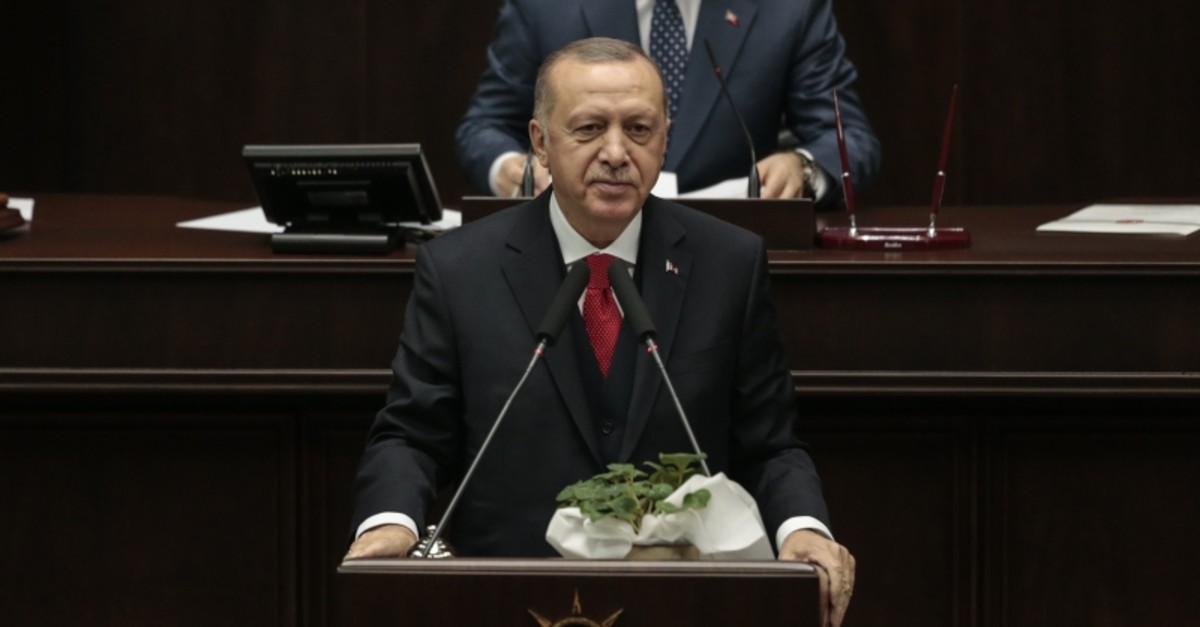 Turkey is determined to step in to prevent Assad regime attacks in violation of the truce in Syria's Idlib, as 400,000 civilians are heading toward the Turkish border amid attacks, President Recep Tayyip Erdoğan said Tuesday.

"We hope the cease-fire in Syria's Idlib is lasting. Turkey is determined to prevent Assad regime attacks in violation of the truce," Erdoğan said during the ruling Justice and Development Party's (AK Party) parliamentary group meeting in Ankara. He added that Turkey's anti-terror operation in Syria allowed the country to smash the terror corridor in the region.

The president noted that there are serious discrepancies between promises made to Turkey regarding Syria and the actual situation on the field and that they have told relevant parties that Turkey will continue operations if necessary: "As long as the situation in Syria continues to be a matter of survival, it is not possible for us to take any steps back," he added.

Touching upon the international community's failure to take action on Idlib, Erdoğan said Turkey will continue to uphold the truce. He continued by saying that Turkey plans to open a new border gate in Akçakale for the passage of humanitarian aid to Syria, although the U.N. has not approved Turkey's request yet.

Turkey announced Friday that a new cease-fire in Idlib, which has been rocked by violence – although "acts of aggression" are already officially banned – was set to start just after midnight on Sunday, Jan. 12.

Turkey had previously asked Russia for a cease-fire in December, sending a delegation led by Deputy Foreign Minister Sedat Önal to Moscow as attacks on the de-escalation zone intensified. The Idlib region has seen an increase in violence in recent weeks as forces loyal to the Assad regime, supported by Russian airstrikes, have launched a fresh assault to capture one of the largest urban centers in the area.

Earlier in August, Damascus scrapped a similar truce agreement only three days after it went into effect, accusing opposition forces and terrorists of targeting a Russian air base. Later, toward the end of August, Assad regime ally Russia announced that the Damascus regime forces would observe a new cease-fire in Idlib. It said the truce aimed "to stabilize the situation" in Idlib but the army "reserves the right to respond to violations" by terrorists and allied opposition groups, it added. Yet again, the cease-fire was short-lived as a Russian airstrike was launched on a health facility in Aleppo's western countryside under the same pretexts, the Syrian Observatory for Human Rights (SOHR) reported only a few hours before the agreement was to go into effect.

Erdoğan also touched upon the situation in Libya, saying that Gen. Khalifa Haftar left Moscow without signing a cease-fire deal, while Libya's U.N.-recognized Government of National Accord (GNA) was conciliatory. He said Haftar initially signaled he would sign the deal, but left without doing so.

"We are not after adventure in Syria, Libya, the Mediterranean. We have no imperial desires nor are we blinded with greed for oil or money. Our sole purpose is to protect our and our brothers' rights and future," the president said.

He continued by noting that Haftar's forces would have taken complete control of Libya if Turkey had not interfered.

"In addition to our Arab brothers Haftar plans to murder, there are also over 1 million Ottoman-descendant Kuloğlu Turks there," Erdoğan said.