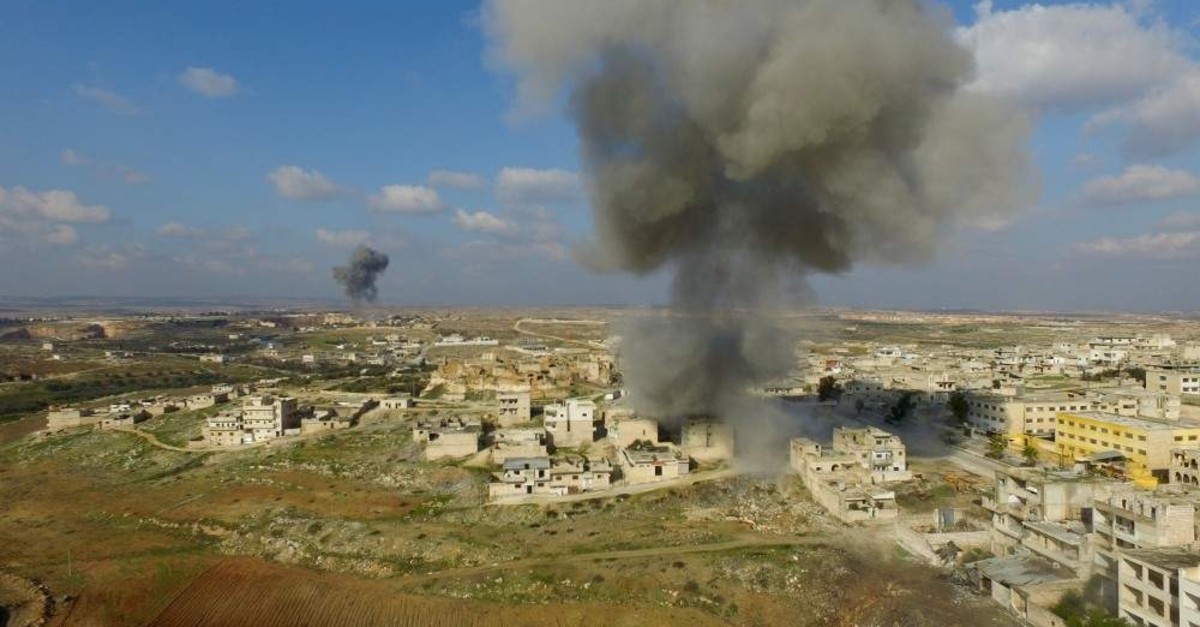 | AA File Photo
by Daily Sabah with Reuters Jan 15, 2020 8:50 am
Russian jets struck several opposition-held towns in northwest Syria's Idlib for the first time since a cease-fire agreed with Turkey came into force two days ago, witnesses and sources said.
They said the towns of Khan al Subl, Maasaran and several others in southern Idlib province were targeted after a two-day lull in aerial strikes against the last opposition bastion that had been pounded for over a month in a renewed assault.
"The Russian airstrikes have shattered two days of relative calm that gave people a small relief from daily raids," Mohamad Rashid, an activist, said.
Hundreds of thousands of people have fled Idlib province in recent weeks as Russian jets and Syrian artillery pounded towns and villages in a renewed government assault aimed at clearing the opposition.
Senior U.N. officials said this month that the humanitarian situation had become more acute with at least 300,000 civilians now on the run in Idlib province, adding to the more than half a million people who fled earlier bouts of fighting to the safety of camps near the Turkish border.
The latest offensive had brought the Russian-led military campaign closer to heavily crowded parts of Idlib province, where nearly 3 million people are trapped, the vast majority of whom are women and children, according to the United Nations.
Moscow says its forces, along with the regime army and Iranian-backed militias fighting alongside them, are fending off terror attacks by al-Qaida militants whom they say hit populated, regime-held areas.
However, they accuse the opposition of wrecking a "de-escalation zone" brokered two years ago between Turkey and Russia.
Moscow announced earlier this week it had opened safe corridors to allow people under opposition rule in Idlib province to flee to government-held areas.
Residents say few people have crossed into state-controlled areas, where they fear retribution, and most have headed to the relative safety of areas near the Turkish border.
Many of the residents of the opposition enclave fear the return of Bashar Assad's authoritarian rule and look to Turkey to halt the Russian-led campaign that has killed hundreds and left dozens of towns and villages in ruins.
President Tayyip Erdoğan said Tuesday that Turkey is determined to stop Assad regime violations of the cease-fire in the northwest.
"We hope the cease-fire in Syria's Idlib is lasting. Turkey is determined to prevent Assad regime attacks in violation of the truce," Erdoğan said during the ruling Justice and Development Party's (AK Party) parliamentary group meeting in Ankara.
Turkey announced Friday that a new cease-fire in Idlib, which has been rocked by violence – although "acts of aggression" are already officially banned – was set to start just after midnight on Sunday, Jan. 12.
Turkey had previously asked Russia for a cease-fire in December, sending a delegation led by Deputy Foreign Minister Sedat Önal to Moscow as attacks on the de-escalation zone intensified. The Idlib region has seen an increase in violence in recent weeks as forces loyal to the Assad regime, supported by Russian airstrikes, have launched a fresh assault to capture one of the largest urban centers in the area.
Earlier in August, Damascus scrapped a similar truce agreement only three days after it went into effect, accusing opposition forces and terrorists of targeting a Russian air base. Later, toward the end of August, Assad regime ally Russia announced that the Damascus regime forces would observe a new cease-fire in Idlib. It said the truce aimed "to stabilize the situation" in Idlib but the army "reserves the right to respond to violations" by terrorists and allied opposition groups, it added. Yet again, the cease-fire was short-lived as a Russian airstrike was launched on a health facility in Aleppo's western countryside under the same pretexts, the Syrian Observatory for Human Rights (SOHR) reported only a few hours before the agreement was to go into effect.
Last Update: Jan 15, 2020 10:52 am
RELATED TOPICS