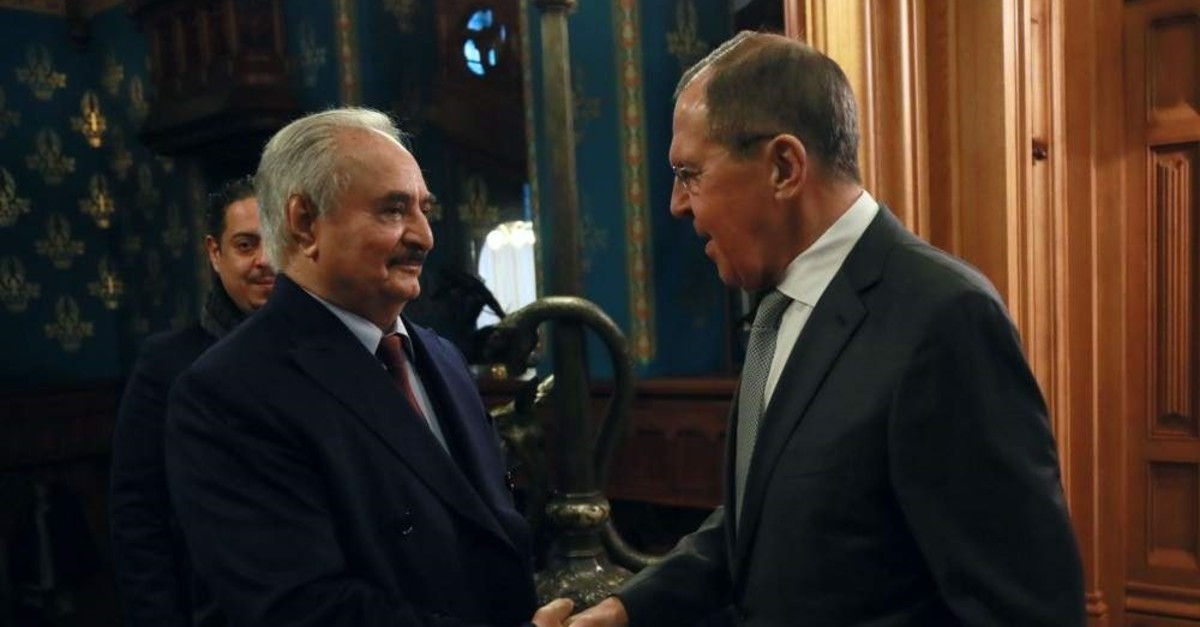 Khalifa Haftar, Libya's putschist general, left the Moscow peace talks without signing a cease-fire agreement that was negotiated in initial talks, leaving many people in doubt about his motives

After Khalifa Haftar, the eastern Libya-based putschist general, left peace talks in Moscow without signing the cease-fire agreement that was previously drafted based on negotiations he agreed to, it is now being questioned whether Russian President Vladimir Putin was played by Haftar.

As Bloomberg reported, Putin might have been fooled by Haftar. Accordingly, Haftar was expecting a welcome ceremony with a red carpet at the Kremlin when he arrived in Moscow for the peace talks. However, he was cooped up in a Russian Foreign Ministry reception building hoping for an audience with the Russian president. In addition, the drafted deal did not meet Haftar's expectations. After all this development, the putschist general lost his temper, stormed out and left Moscow without signing the deal.

Speaking to Bloomberg, Kirill Semyonov, a Libya expert at the Russian International Affairs Council that was founded by the Kremlin, said, "This won't be forgotten by Putin."

"Haftar practically ran away when he was expected to sign the document. This showed a lack of respect to his hosts and is a blow to Russia's reputation," he added.

On Jan. 12, the warring sides in the Libyan conflict announced a cease-fire in response to a call by President Recep Tayyip Erdoğan and Putin. The two sides gathered Monday in Moscow to sign an agreement aimed at ending hostilities and starting a political dialogue.

After more than eight hours of talks, the head of Libya's Government of National Accord (GNA) Fayez al-Sarraj signed the cease-fire deal, but Haftar left for Libya early Tuesday without signing the agreement after asking for more time to consider it.

Aguila Saleh Issa, the speaker of the pro-Haftar House of Representatives in the eastern city of Tobruk, said, "The cease-fire in Libya is over and the war will resume."

More than 280 civilians and 2,000 fighters have been killed since the beginning of Haftar's assault on Tripoli, according to the U.N. The fighting has displaced some 146,000 people, with the ongoing violence threatening to plunge Libya into violent chaos that will rival the 2011 conflict which led to the ousting and murder of Gaddafi.

On Thursday, Erdoğan said Turkey was starting the deployment of its troops to Libya and that it would use all its diplomatic and military means to ensure stability to its south.

Erdoğan before said that Turkey has no imperial desires nor is blinded with greed for oil or money.

"Our sole purpose is to protect our and our brothers' rights and future," the president said, saying that Turkey had deep historical and social ties with the North African country.

The memorandum of understanding signed between Ankara and Moscow to call warring sides for political solution underlined the strong commitment to the sovereignty, independence, territorial integrity and national unity of Libya.

Speaking to Anadolu Agency (AA), Russian deputy Leonid Slutsky said Thursday that the joint efforts by Russia and Turkey have the potential to bring peace to conflict-hit Libya.

"The format that has been found, the format that the Russian and Turkish leaders have proposed for Libya, I think is rational," he said.

"The fact that we managed to get the signatures of Fayez al-Sarraj in the first meeting is a great success," he said, referring to the head of Libya's GNA.

Commenting on the position of Haftar, Slutsky said that the general was saving his public image.

"Haftar, as I understand it, Haftar thinks, perhaps it seems to him that to abandon his program for the capture of Tripoli means to lose face. Perhaps it's because of the external influence," Slutsky said.

Meanwhile, Haftar confirmed his participation in an international conference in Berlin on the Libyan crisis this Sunday, according to a source privy to the matter.

The source who asked not to be named said Thursday that "Haftar has received an official invitation from Germany to attend the Berlin conference and (he) will be traveling with Libyan jurist Aguila Saleh."

Germany seeks to bring together countries concerned with the Libyan issue at the Berlin conference in an attempt to reach a political solution to the conflict.

Earlier in the day, Germany's foreign minister headed to Libya to persuade Haftar to join the international conference on the conflict, as the U.N. urged support for the peace initiative.

Heiko Maas said the Berlin conference – scheduled for Sunday – was "the best chance in a long time" for peace talks in Libya.

Maas was due to meet Haftar in the eastern city of Benghazi – one of the putschist general's strongholds – days after meeting his rival al-Sarraj, who serves as head of the U.N.-recognized government in Tripoli.

"I hope that the parties will use this chance to take Libya's future back into Libyan hands," Maas said in Berlin before boarding his flight.

"For that, we need readiness for a real cease-fire and the participation of both warring parties in the dialogue format suggested by the United Nations," he added.

Speaking later in the day, Maas said that Haftar is ready to abide by the cease-fire agreement.

In his report to the U.N. Security Council late Wednesday, U.N. chief Antonio Guterres urged all warring parties to stop fighting and "engage constructively toward that end, including within the Berlin process."

He also warned against "external interference," which he said would "deepen the ongoing conflict and further complicate efforts to reach a clear international commitment to a peaceful resolution of the underlying crisis."

The Berlin conference will aim to agree on six points including a permanent cease-fire, implementation of the arms embargo and a return to the political process for peace, he added.

German Chancellor Angela Merkel will host leaders of Turkey, Russia, the United States, Britain, China, France and Italy Sunday at the summit, which follows a meeting in Moscow Monday where Libya's warring parties failed to sign a cease-fire agreement.

The two warring sides in Libya were also invited.