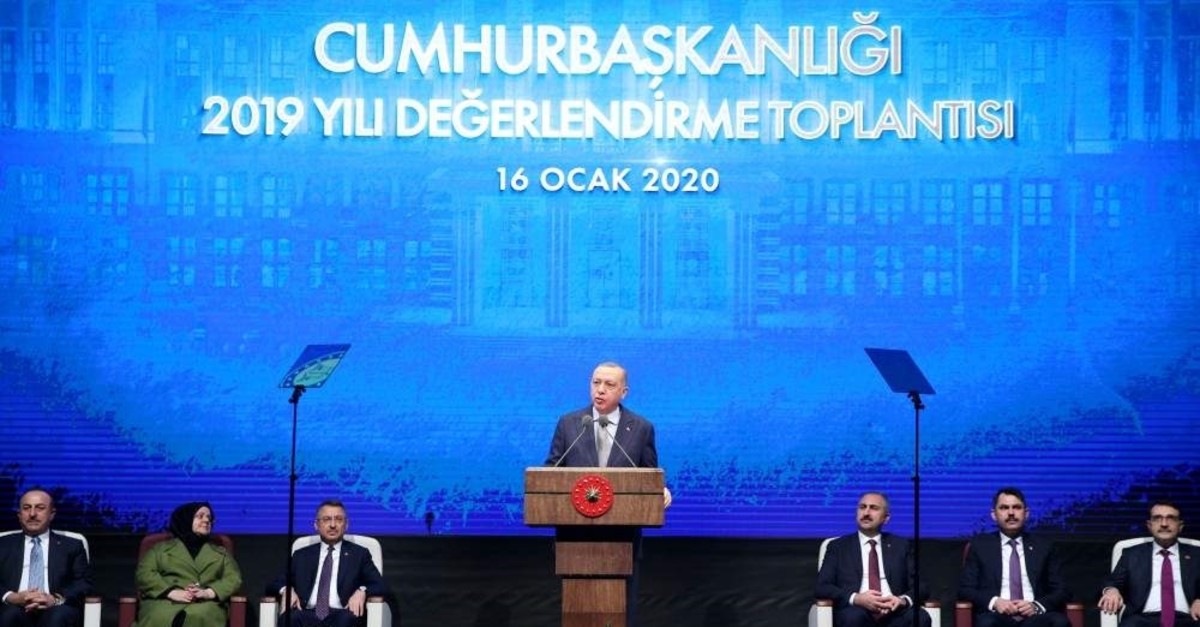 The year of 2019 has been completed with many success stories against all odds, said President Recep Tayyip Erdoğan, expressing future plans to escalate achievement in many areas to a further level in 2020

Turkey has left behind 2019, the year of "success stories," President Recep Tayyip Erdoğan said Thursday, referring to achievements in foreign policy, the fight against terrorism and steps made in the judiciary, while eyeing 2020 with ambition and hope built upon those achievements.

"About nine years ago, in 2011, we presented our 2023 targets to our people. Those targets have served as a guideline for all of our work since then," Erdoğan said, at the Annual Evaluation Meeting for 2019 at Beştepe National Congress and Culture Center in the capital Ankara.

Touching upon the fact that the threats facing the country have increased remarkably in this period, Erdoğan said the main aim of these attacks is to prevent Turkey from reaching its 2023 targets.

"Yet, thank God, we have been able to foil all of them," Erdoğan said, referring to the attacks.

Reiterating that 2019 was predicted as the year of "destruction" and "surrender" by many for Turkey, Erdoğan said the country proved otherwise by turning the year into a time of "resurrection." "Our national solidarity has been strengthened. Terrorist groups have retreated from our borders. The world has become a dungeon for coup plotters," Erdoğan said, listing some of the achievements of the year.

"In these respects, 2019 is a success story that shows what Turkey can achieve even under the worst circumstances," the president underlined, adding that he hopes to do more in 2020.

Regarding the developments in the justice system, Erdoğan said many steps were taken in 2019 to achieve judicial independence and objectivity. The president stated that the number of prosecutors and judges has increased from 9,349 to 20,629, while the number of courts increased by 82%.

"It is the main condition of the rule of law to strengthen judicial independence and objectivity," Erdoğan said.

The reform package, passed by a show of hands in October, contains a host of changes, including laws covering freedom of expression, passports and protecting children. The reforms are designed to "strengthen trust in the judiciary [and] have an important place in our efforts to take our country to a brighter future," Erdoğan said in a statement in September.

Under the reforms, expressions of thought that do not "cross the limits of reporting" and that are "for the purpose of criticism" will not constitute a crime.

Also under these reforms, the pre-sentencing detention period for crimes not due to face a heavy penalty court will not surpass six months, and for more serious offenses, the period will be a maximum of one year.

Erdoğan expressed that the government has been working on sentencing procedures that would not contradict public consciousness while providing necessary punishments for criminals. In this respect, the president said the second judicial reform package focusing on sentencing regulation is ready and will be presented to Parliament in a couple of weeks.

As far as the fight against terrorism is concerned, Erdoğan said all the terrorist groups, including the PKK/YPG, Daesh and the Gülenist Terror Group (FETÖ) have been "smashed" through the country's operations in 2019.

Stating that 1,250 terrorists have been killed during the operations against the PKK in the past year, Erdoğan said that the number of PKK terrorists within Turkey fell to a level even lower than when the group was first founded.

The protest started when Hacire Akar turned up at the doorstep of the HDP's Diyarbakır office one night. A week later, on Sept. 3, 2019, families inspired by Akar transformed her solo stance into a collective sit-in protest. Akar's son Mehmet returned home on Aug. 24, giving hope to other families who quickly joined the protest.

Since the beginning of their protest, the mothers and families received great support from across the country with almost all segments of society expressing solidarity with their cause.

The president also stated that 388 terrorists have been killed during operations against other terrorist groups such as Daesh and al-Qaida.

"Our fight against FETÖ, which fired shots at our people on July 15 (2016), will continue until they are cleared out of all the state institutions and the country as a whole," Erdoğan said, adding that this allowed the country to be more successful in areas related to security.

Erdoğan also noted the wall that was built at the Syrian border, spanning 825 kilometers of the 911-kilometer border. He said the work to establish 211 electro-optical towers for surveillance purposes has also been launched.

As far as the foreign policy of the country is concerned, Erdoğan said that Turkey ranked fifth in the world for the widest representative network in 2019.

Erdoğan also referred to the Asia Anew initiative launched in 2019 as well as the ties with Africa that were revived over the past year and said these types of initiatives, including the Turkic Council, are historical steps.

"We hope to gain new momentum with the European Union in the coming period," the president said, regarding Turkey's ties with Europe.

He underlined, however, that the Syria issue remains the most crucial foreign policy focus.

"We have opened our doors to all the victims without discrimination in the Syrian and Iraqi crises," he said, adding that the efforts of terrorists to bring the Syrian war to Turkey have led the country to take active steps within the field.

Mentioning Operation Peace Spring, Erdoğan said the operation enabled them to break the terror corridor plans of the YPG east of the Euphrates.

"So far, 373,000 Syrians have returned voluntarily to the areas liberated by our country," he said.

Regarding Iraq, Erdoğan said Turkey is planning to reopen its chief consulates in Basra and Mosul in 2020 while opening new ones in Najaf and Kirkuk.

The president touched upon the developments in the Eastern Mediterranean and said the aims of restricting Turkey to its own coast were interrupted by the signing of a maritime deal with Libya.

"It is no longer legally possible for other countries to conduct seismic survey and drilling activities without Turkey and Libya's approval in the areas specified in the maritime deal," he emphasized, underlining that in 2020, these areas will be registered and the research activities will begin.

"With the awareness of the fact that the security of Turkey starts outside its borders, we will continue to mobilize all of our military, political, trade-related, humanitarian and diplomatic efforts to stabilize the region to our south," Erdoğan said.