Turkey to be involved in Libya until GNA's independence secured 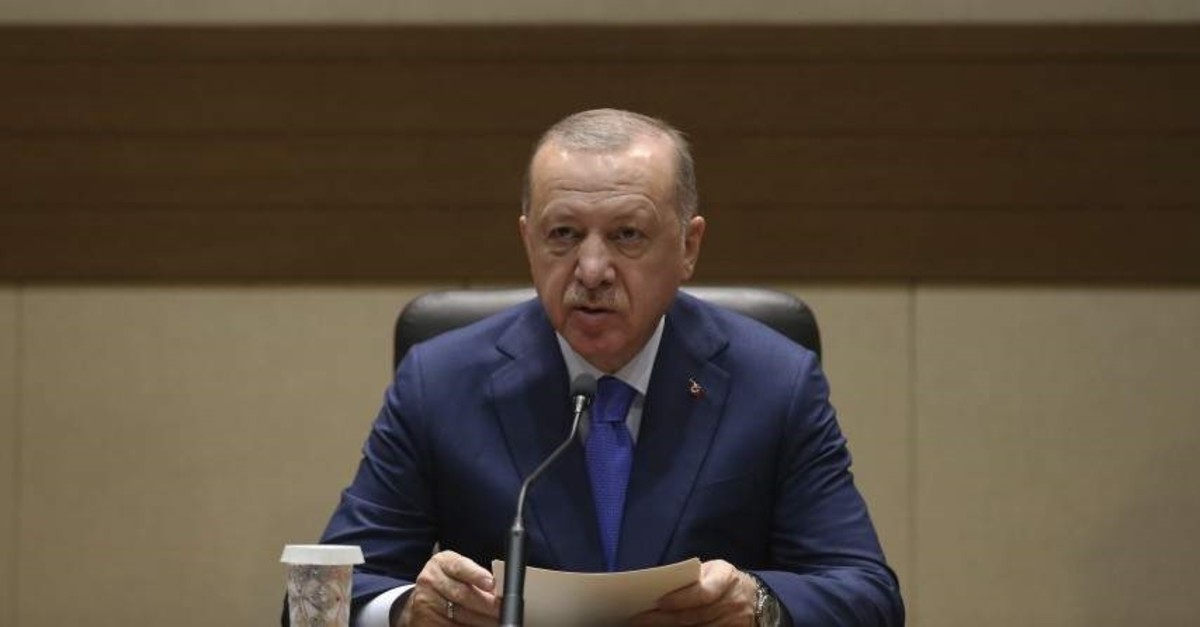 Gathering with world leaders at the Berlin conference on Sunday, President Recep Tayyip Erdoğan expressed that a permanent solution in Libya can only be ensured via political dialogue. He reiterated that Turkey will cooperate with the U.N.-backed Libyan government until peace is built in the country

Turkey will reap the fruits of its efforts regarding Libya in the upcoming talks in Berlin, Erdoğan said in a joint news conference with Putin ahead of the summit on Sunday. The two presidents spoke in an inter-delegation meeting, which included Defense Minister Hulusi Akar, Foreign Minister Mevlüt Çavuşoğlu, the head of Turkey's National Intelligence Organization (MİT) Hakan Fidan, Presidential Communications Director Fahrettin Altun, Presidential Spokesman Ibrahim Kalın and other top officials.

Erdoğan said that Turkey is aware of its responsibility in terms of ensuring the cease-fire in Libya but noted that all actors need to cooperate in this regard. "In order for Libya to have a political process, Haftar's aggressive attitude must come to an end," he said, adding that the summit needs to facilitate the transition to the political process.

The president also highlighted the multidimensional cooperation between Turkey and Russia, as he called 2019 a bright year in terms of bilateral relations. "We've completed many projects including the S-400 defense systems with determination, and without making any concessions on our national interests despite all the pressure we faced," Erdoğan said, noting that the joint efforts of both countries have greatly contributed to the resolution of conflicts in the region. Putin, on the other hand, highlighted that serious steps have been taken so far in terms of the political process in Libya. "Despite the ongoing conflicts on the field, the conflicting sides listened to us and a truce was reached (in Libya)," the Russian president said.

"Even the fact that the conflicting sides in Libya came to Moscow for truce talks alone is a success in my opinion," he said, as he thanked the foreign ministers. Putin noted that the two countries have taken serious steps in Istanbul, which paved the way for Berlin talks and they aim to finalize the issue in the summit.

Speaking to the reporters ahead of his visit to Berlin, Erdoğan underlined Turkey's key role in bringing peace to Libya.

Since the ousting of late ruler Moammar Gadhafi in 2011, two seats of power have emerged in Libya: one in eastern Libya supported mainly by Egypt and the UAE, and the other in Tripoli, which enjoys U.N. and international recognition. The Government of National Accord (GNA) led by al-Sarraj has been under attack since April from putschist Gen. Khalifa Haftar's forces, with fighting killing over 280 civilians and 2,000 fighters.

The president also highlighted the multidimensional cooperation between Turkey and Russia, as he called 2019 a bright year in terms of bilateral relations. "We've completed many projects including the S-400 defense systems with determination, and without making any concessions on our national interests despite all the pressure we faced," Erdoğan said, noting that the joint efforts of both countries have greatly contributed to the resolution of conflicts in the region.

"We highlighted on every occasion that a permanent solution in Libya can be ensured via political dialogue... We cemented our cooperation with the legitimate Libyan government via two memoranda of understandings signed at the end of 2019. Turkey has become a key to peace in Libya with its efforts both infield and diplomacy," the president said in Istanbul.

Leaders and top government officials, including Erdoğan, Putin, French President Emmanuel Macron and British Prime Minister Boris Johnson, gathered in Germany yesterday in a bid to thrash out a lasting cease-fire in Libya and pave the way for a political solution.

The meeting was still ongoing when Daily Sabah went to press. However, while the summit was continuing, Reuters reported that a participant confirmed that the leaders at the summit were close to an agreement.

"We see the Berlin summit as an important step on the way to cementing the cease-fire and a political solution," Erdoğan expressed on the summit.
Progress in peace efforts after the January cease-fire "should not be sacrificed to the ambitions of blood and chaos merchants," he said.

The president had also voiced hope that decisions to be taken in the summit will pave the way for solid developments in various areas from security to economy.

"Now is the time for Libyans to decide on a future for themselves - one free from violence fueled by external actors," Pompeo tweeted ahead of the meeting.

Top officials from Egypt and the United Arab Emirates, main supporters of the Libyan warlord Haftar, took part in the conference.

On Jan.12, the warring sides of the Libyan conflict announced a cease-fire in response to a joint call by Turkish and Russian leaders, although further talks came to no avail last week after Libyan warlord Khalifa Haftar left Moscow without signing the deal.

President Erdoğan also criticized the international community for not showing the necessary reaction against the "reckless attacks of Haftar."
"Actions of putschist Haftar and his supporters, which has openly been violating U.N. Security Council resolutions, has long been ignored," Erdoğan said in Istanbul.

However, Turkey has maintained a principled and consistent stance against the crisis in Libya since the first day it started, the president said.
On Saturday, Erdoğan urged the international community to assume more responsibility to end the violence in the country.
"The world has not done enough to support pro-diplomacy and pro-dialogue actors in Libya," Erdoğan said in an op-ed he wrote for Politico.

Asked for his comments on Haftar's visit to Greece Friday, Erdoğan said Greece is in "serious discomfort" for not having been invited to Germany. His visit counts for nothing for Turkey, the president said.

"However, (Greek Premier Kiriakos) Mitsotakis plays the game wrong, his steps are not right, and he did not start the process well," he stressed.
During his visit ahead of the Berlin conference, Haftar met with top Greek officials, including Mitsotakis and Greek Foreign Minister Nikos Dendias.
Mitsotakis said late Thursday that they would veto "any political solution" to the conflict in Libya on the EU Council level if the Turkish-Libyan treaties are not canceled.

The Greek prime minister also expressed his discomfort over not being invited to the Berlin conference on Libya.

Haftar flew to Athens on a surprise visit Thursday, with Greece seeking to build ties with Haftar after the legitimate government in Libya signed a maritime and military cooperation deal with Turkey in November.

Athens is vehemently opposed to Turkey's maritime deal with Libya, which claims much of the Mediterranean for energy exploration, conflicting with rival claims by Greece and the Greek Cypriot Administration.

Relations between regional rivals Greece and Turkey have deteriorated considerably in recent months over undersea exploration and drilling rights in the Aegean Sea, off Cyprus, and in areas off the southern Greek island of Crete that are included in the Turkish-Libyan agreement. Ankara raised the stakes with moves to explore waters controlled by Greece and fellow EU-member the Greek Cypriot Administration, including sending drillships into waters where the Greek side claims exclusive economic rights.

On Jan. 2, Greece, Israel and the Greek Cypriot Administration signed a deal to build an undersea pipeline to carry gas from new offshore deposits in the southeastern Mediterranean to continental Europe.

Turkey strongly opposes the project, which would see part of the 1,900-kilometer EastMed pipeline pass through waters it claims under its deal with the Tripoli government.

He also called on the United Nations to negotiate truce terms in Libya without either side setting preconditions.EastMed pipeline pass through waters it claims under its deal with the Tripoli government.