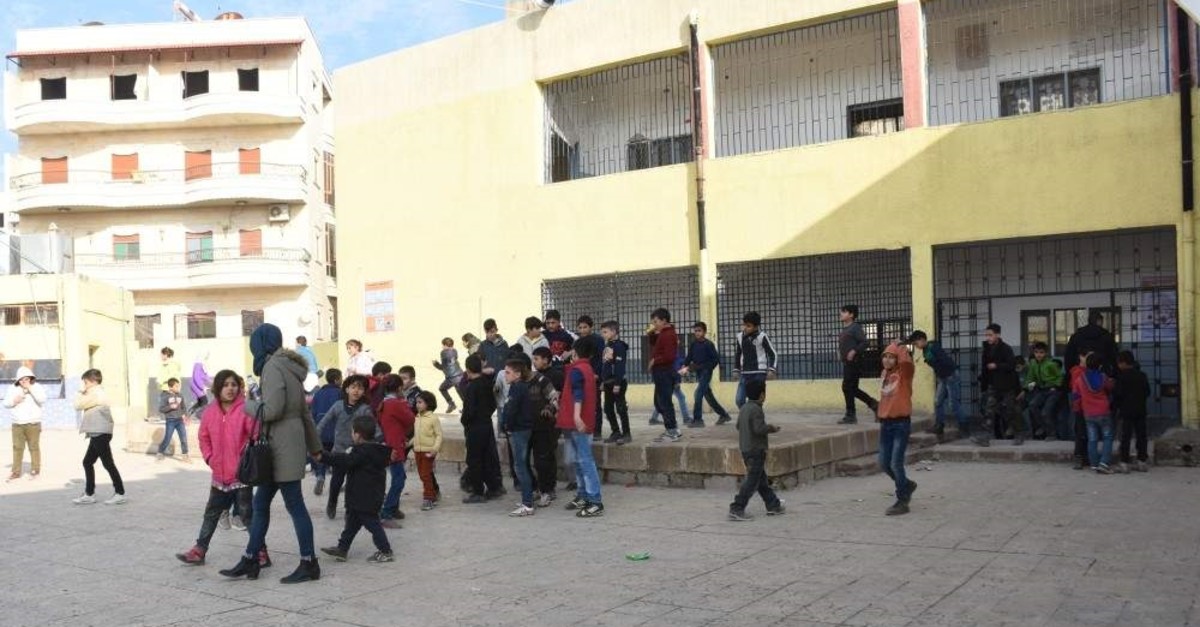 In the two years since, Turkey has striven to bring about a sense of normality for residents of the liberated areas, allowing locals to return to their homes. Despite a number of outstanding issues, nearly 350,000 civilians in the town of Afrin now live in a stable and secure environment.

The operation in Afrin – which lies close to the border with Turkey's Hatay province – was widely expected in the wake of Operation Euphrates Shield, which cleared Daesh terrorists from Turkey's border between Aug. 24, 2016 and March 2017.

Afrin had been a major stronghold for the YPG/PKK since July 2012, when the Assad regime in Syria left the city to the terror group without putting up a fight. In order to end the terror group's oppression of local people, Turkey cleared the area of PKK-affiliated terrorists with 72 Turkish aircraft striking targets following an announcement of President Recep Tayyip Erdoğan on Jan. 20, 2018.

Turkish security forces took the utmost care not to harm civilians, while the terror group, in contrast, used civilians as human shields. During the operation, the YPG/PKK targeted residential areas in the Turkish provinces of Hatay and nearby Kilis, launching missile attacks that killed seven civilians and injured 124.

The Turkish military entered Afrin town center and liberated it from terrorists on March 18, 2018, with the Turkish Armed Forces (TSK) and Syrian National Army (SNA) taking a total of six town centers, 282 villages, 23 strategic hills, one dam and 50 other strategic points.

In addition to military operations, Turkish aid foundations have worked to provide humanitarian relief to local people in the region. Following Operation Olive Branch, many Turkish humanitarian agencies, including the Turkish Red Crescent, have been distributing food daily in the district center and villages to meet the needs of the people.

With the stability in the region secured, civilians began to return to their homes following March 20, 2018. The number of civilians living in the town has now reached almost 350,000.

The military's efforts to secure and establish safety in the region continue despite the completion of the operation. Following the liberation of the region, 65,000 Syrians returned to the area. Turkey often voiced that in order to establish long-lasting stability and normalization in Syria, the return of displaced Syrians to their hometowns is just as important as the fight against terrorism.

Turkish officials have exerted strenuous efforts in order to completely erase all traces of terrorism, strengthen security, make civilians' return home easier and bring a sense of normality to the region. Ammunition and artillery belonging to the terror group were found and destroyed. Furthermore, work is ongoing to detect and destroy mines and other explosive devices planted by the terrorists.

Following the capture of Afrin's town center, seven local councils were established to allow for the democratic representation of local people in their administration. These councils have helped local people in many areas including agriculture, industry, trade, culture, sports, health and education and allowed for the normalization of daily life.

Education and health are two areas to which Turkey has devoted the utmost importance. Since the operations, Turkey has been rebuilding Afrin's infrastructure, as well as health and education institutions. Schools are being renovated and a hospital is being built. A hospital with 100 beds and 13 different branches of operation was put into service after Turkey supported its restoration. The hospital offers free health services to local people. In schools, the curriculum imposed by the terror group was abrogated and a curriculum determined by the temporary government implemented, allowing up to 53,000 students to continue their education across the region.

Turkey is also helping locals build olive oil facilities in the town where agriculture is the main source of income. Since the terrorists were cleared from the city, many locals have been able to open new shops in the city center. Turkish products can easily be found in these shops and people can also shop using the Turkish lira.

Turkey carried out two cross-border operations west of the Euphrates River – Operation Euphrates Shield launched in August 2016 and Operation Olive Branch in January 2018 – to drive terrorist groups, including the YPG/PKK and Daesh, from its borders.

Turkey also prevented the YPG/PKK from establishing a de facto autonomous region in Syria connecting the northwestern Afrin canton to the Kobani and Jazeera cantons in the northeast, which Ankara described as a "terror corridor" posing a grave security threat to its national security.
RELATED TOPICS