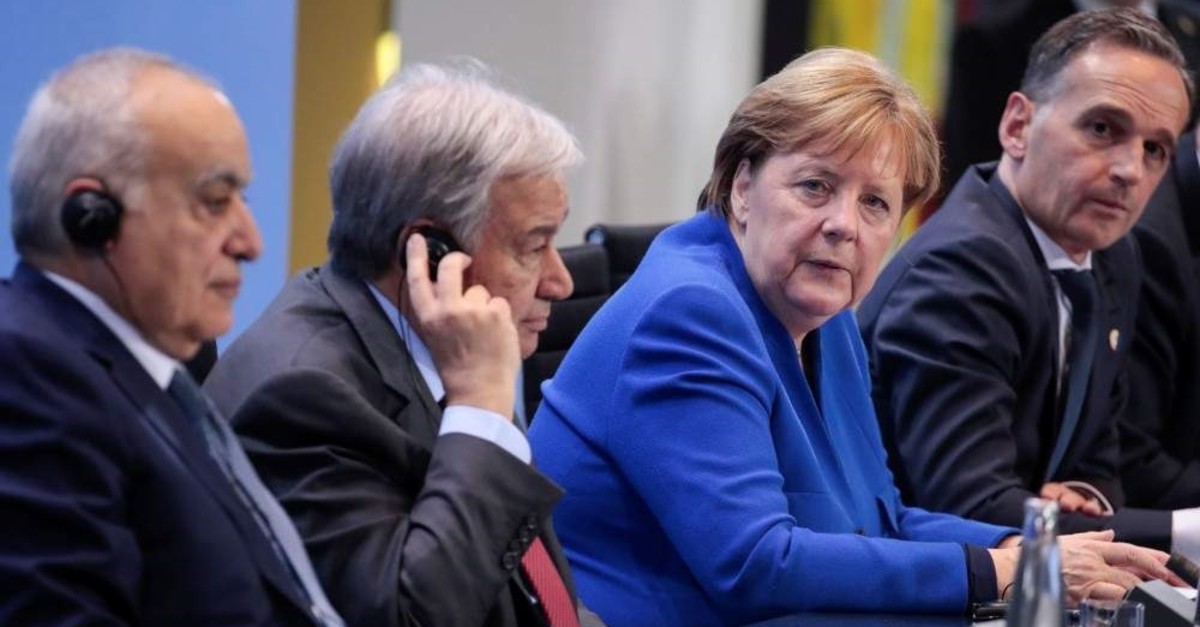 Special Representative and Head of the United Nations Support Mission in Libya (UNSMIL) Ghassan Salame; Secretary-General of the United Nations (UN) Antonio Guterres; German Chancellor Angela Merkel and German Foreign Minister Heiko Maas give a press conference at the end of a Peace summit on Libya at the Chancellery in Berlin, Jan.19, 2020. (AFP PHOTO)
by Anadolu Agency Jan 20, 2020 11:53 am

The European Union said following Sunday's international conference in Berlin that the conflict in Libya could only end through a political process that is led and owned by the country itself.

"As the European Union, we reaffirm that the only sustainable solution to the crisis in Libya is through U.N.-led mediation efforts that put the needs of all Libyan people at the forefront. Only a Libyan-led and Libyan-owned political process can end the conflict and bring lasting peace," European Commission President Ursula von der Leyen and EU foreign policy chief Josep Borrell said in a joint statement.

They said Sunday's conference on Libya "brought together the most influential regional and international partners at this critical moment in the Libyan crisis."

Recalling the commitment of participants to refrain from acts that would endanger the truce, they added: "An agreement has also been reached on a swift follow-up. This is an important step forward."

The statement also voiced support for the "unity, sovereignty and territorial integrity of Libya, in the interest of regional stability and prosperity." Noting that the "first significant step" was taken through the conference, it said the EU will play an important role in the process.

"We will reflect on how to best contribute to the monitoring of the cease-fire and the respect of the arms embargo," it added.

Sunday's international conference in Berlin concluded by stressing the participants' commitment to implementing a fragile cease-fire in the North African country.

Since the ouster of late ruler Moammar Gadhafi in 2011, two seats of power have emerged in Libya: putschist Gen. Khalifa Haftar's forces in eastern Libya supported mainly by Egypt and the United Arab Emirates, and the Government of National Accord (GNA) in Tripoli, which enjoys U.N. and international recognition.

Libya's internationally recognized government in the capital Tripoli has been under attack by Haftar since last April, and fighting over the last nine months has killed more than 1,000 people.