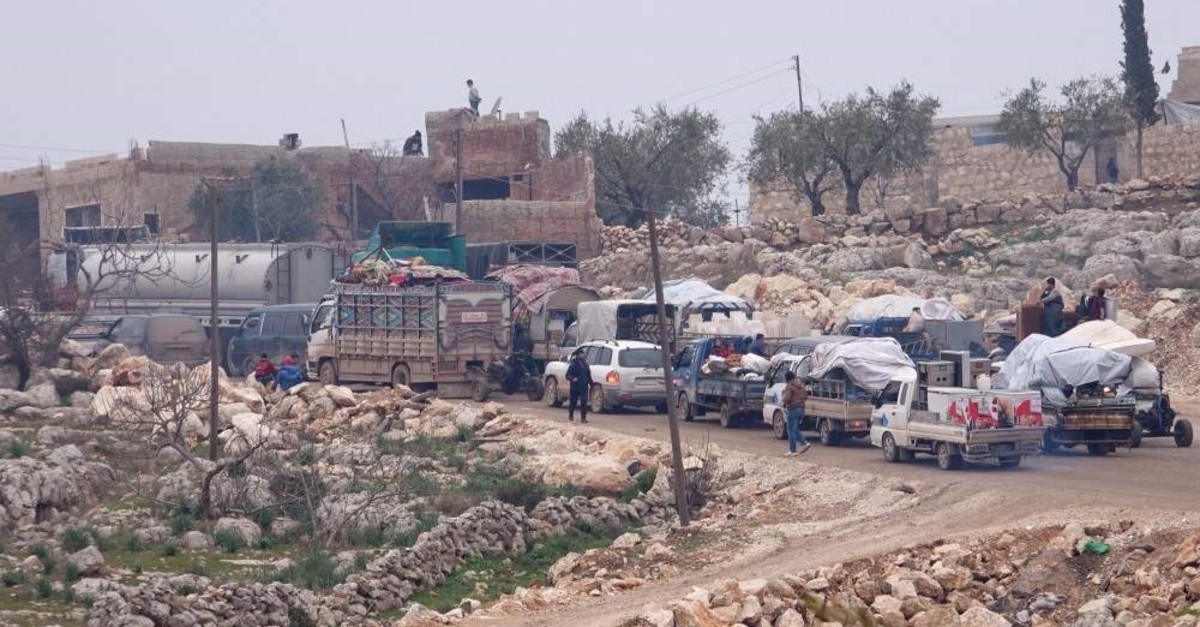 Syrian civilians, who have been forced to flee their homes due to regime attacks targeting residential places in northern Syria, migrate continuously in search of a safe place to take shelter.

Syrians who have fled from Aleppo and Idlib provinces to seek refuge in relatively safer areas of the country are suffering from continuous regime bombardment. They are forced to migrate constantly, sometimes seeking refuge at locations where they previously resided.

Hundreds of Syrians tried to flee towns and villages in the countryside of Aleppo toward Afrin and other safer areas to seek refuge from the regime and Russian bombings.

Ali Ebu İhsan, one of the Syrian civilians who had to flee due to constant regime attacks, said: "We had to migrate seven times in a short time period due to security threats in the region."

Most of the displaced civilians took refuge in relatively safer areas near the Turkish border, while others are headed toward the areas of Operation Olive Branch and Euphrates Shield.

Turkey carried out two cross-border operations west of the Euphrates River - Operation Euphrates Shield launched in August 2016 and Operation Olive Branch in January 2018 – to drive terrorist groups, including the YPG/PKK and Daesh, from its borders.

Turkey also prevented the YPG/PKK from establishing a de facto autonomous region in Syria connecting northwestern Afrin canton to the Kobani and Jazeera cantons in the northeast, which Ankara described as a "terror corridor" posing a grave security threat to its national security.

Turkey pushed hard for a ceasefire in Idlib after the region endured months of battering by forces loyal to the Bashar al-Assad regime and its allies, sending about a million civilian refugees fleeing toward the Turkish border.

"We appreciate the aid coming from Turkey and the Red Crescent," said Fatıma El Suri, who indicated she is immigrating for a third time. "We were residing in the tent of our relatives, but we moved to our own tent owned by the Red Crescent."

Meryem El Hammud, who lost her husband in an attack in Aleppo, said she is migrating for a fifth time. "May God bless Turkey, they are helping in every respect, trying to remedy the deficiencies," she said.

Syrian civilians all underlined that they want the war to end and to return to their homes.

The Syrian Civil War, which broke out in 2011, has killed hundreds of thousands of people and forced more than 5 million people to flee the country, while more than 7 million are internally displaced.