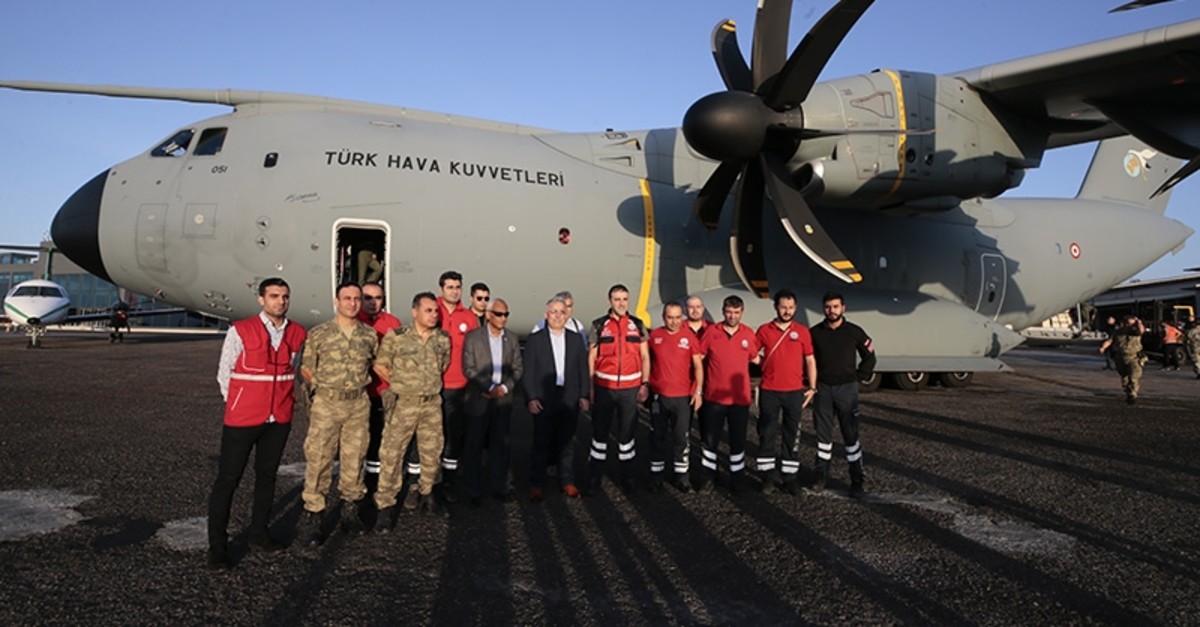 A military plane carrying a team of medical experts bringing civilians injured in a recent terrorist attack in Mogadishu arrived in the Turkish capital in Ankara on Tuesday.

Semih Korkut, an official from the Ministry of Health, told Anadolu Agency that preparations were made to bring back those injured in the attack on the instructions of President Recep Tayyip Erdoğan.

Meanwhile, the Somali prime minister said in a statement Tuesday that the government will take necessary action to ensure the security of Turkish nationals after a meeting with the Turkish ambassador and other officials in Mogadishu.

"We thank our Turkish brothers for their support, and the Somali government will take any action to secure the security of Turkish nationals," Hassan Ali Khaire said.

The terrorists will not be able to stop Turkish development projects going on in our country, the statement added.

“Somali elite have generally responded positively to the prospect of Turkey doing more business in Somalia,” senior Somali politician and academic Adam Aw Hirsi told Daily Sabah. He noted that some even went farther and expressed they would like the Turkish military to provide support in the fight against terrorist organizations in Somalia.

At least three people were killed and 20 others injured, including several Turkish nationals, when a suicide car bomb targeted a police convoy escorting Turkish contractors in Mogadishu on Saturday.

Turkey's official humanitarian institutions, such as TİKA, the Turkish Red Crescent Kızılay and Diyanet Foundation along with civil initiatives such as the Humanitarian Relief Foundation (IHH) and Helping Hands, have implemented many development aid projects relating to infrastructure, education, health and related fields. For instance, TİKA financed projects in Mogadishu that included rehabilitating the Digfer Hospital, constructing 33 kilometers of roads and building the Somalian Statehouse.

Relations between Turkey and Somalia date back to the 16th century. At the time, the Ottoman Empire sought to prevent Somalia from becoming a Portuguese colony. In the wake of the 16th century, Somalia was ruled by local elements of the Ottoman Empire, following the empire's demise, by Western colonial powers. During this period, the Ottoman presence in Berbera, just like the presence of the military training center in Somalia today, was the guarantee of peace in the region.

Contemporary Turkish and Somalian relations began with the opening of embassies in 1979, although Turkey's embassy was closed in 1992 due to the civil war in Somalia. In the following years, Turkey was not indifferent to Somalia's internal problems and joined the United Nations Operation in Somalia with an army under the control of Gen. Çevik Bir. During the civil war, some Turkish civil initiatives also provided assistance through their local partners.

During the transitional government in Somalia, official bilateral relations remained limited. Following this period, then-Prime Minister Erdoğan and the late President Abdullahi Yusuf met on Jan. 29-30, 2012, at the African Union summit meeting in Addis Ababa. At this meeting, Prime Minister Erdoğan asked the Somali president to send a delegation to Ankara to present Somalia's needs.