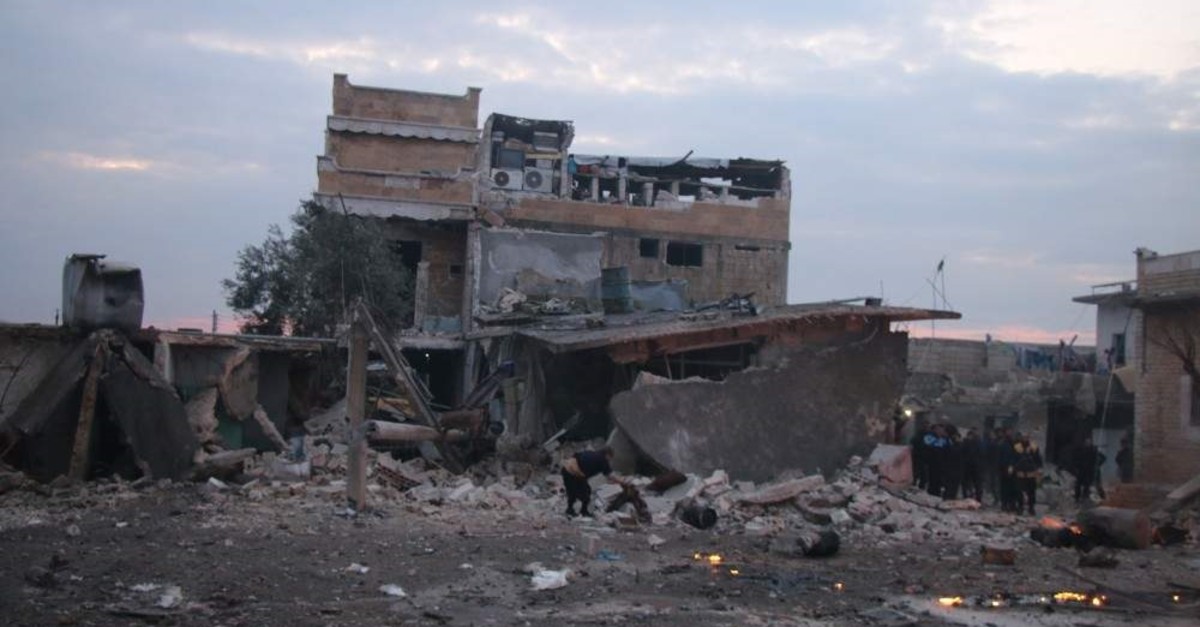 As the Bashar Assad regime and Russia continue their attacks on civilian infrastructure in Syria's northwestern provinces, aid groups are forced to think of alternatives to hospitals that can be easily reached. Hospitals are now being built around mountains, and ambulances are being camouflaged, the head of Syria's White Helmets defense group said Tuesday.

"There is an approach of not targeting ambulances, but we build hospitals around mountains and camouflage the ambulances," Raed al-Saleh said during an interview with Anadolu Agency (AA), adding that there is no mechanism protecting the voluntary employees.

Aid organizations have had difficulty meeting the needs of locals, and hundreds of thousands of civilians were in dire need of humanitarian assistance, Saleh added.

According to the White Helmets, three hospitals have been attacked since the beginning of January while five schools, six markets and three civil defense centers were also targeted. Furthermore, at least 68 hospitals have been attacked since April, according to the Union of Medical Care and Relief Organizations, a coalition of medical organizations that provide care in Syria.

Medical facilities have been hit especially hard during the conflict as the Assad regime and Russia do not differentiate between ordinary buildings and health facilities during attacks. The World Health Organisation (WHO) has frequently voiced that several hospitals and health care centers have had to suspend work and evacuate the area for their own safety.

Between April 29, 2019, and Jan. 5, 2020, the U.N. Office of the High Commissioner for Human Rights (OHCHR) recorded the deaths of 1,460 civilians, including 417 children, as a result of the military escalation in Idlib, Hama and Aleppo.

"Four million people live in northwest Syria, of which 2.8 million are estimated to be in need of humanitarian assistance. Women and children are estimated to make up 76% of this population. The main needs of the most recently displaced individuals are nonfood items, shelter, food and cash assistance. Currently, almost half of those newly displaced are living with host families and rented houses, while 32% are living in camps or individual tents," a report of the U.N. Office for the Coordination of Humanitarian Affairs (OCHA) published on Jan.15 said.

The U.N. emphasized further that conditions for refugees are worsening due to cold weather, with the need for emergency assistance such as health services for chronic illnesses and maternal care. "The winters, in particular, are adding another layer of urgency to the situation with frequent flooding affecting camps and informal settlements and many families seeking shelter in unfinished buildings," the report added.

Russian and Syrian regime warplanes killed at least 40 people in Idlib and near Aleppo province Tuesday in a surge of violence that has been ongoing since mid-December, ignoring the cease-fire brokered by Turkey to establish peace and stability.

According to the Syrian Observatory for Human Rights, nine were killed in the rural village of Kfar Taal, west of Aleppo, before noon. An entire family of eight, consisting of parents and six children, were among those dead, the Britain-based war monitor said. Another nine civilians were killed in Maardabseh in the southeast of Idlib.

"God take revenge on all tyrants. There is no one else left in my family; they are all gone," Abu Yasser, 71, a relative of the family wiped out in Kfar Taal, said in a voice recording sent to Reuters.

At least 22 other civilians were killed by the airstrikes on the de-escalation zone, its surroundings and nearby Aleppo.

Furthermore, according to İhlas News Agency (IHA), Russian warplanes targeted a refugee camp in Atareb village west of Aleppo, killing two civilians and injuring further five on Wednesday. Civil defense groups rushed to the scene of the attack to help get the injured to a hospital. The Assad regime and Russia continued to attack the villages of Bashnata, Al-Mansoura and Bashqatin the same day.

Rescuers and aid agencies state that aerial bombings and forces on the ground have left dozens of towns in ruins while damaging several hospitals, schools and aid groups' centers.

Regarding the situation in Idlib, Foreign Minister Mevlüt Çavuşoğlu said at the World Economic Forum in Davos on Wednesday that the Assad regime is increasing its attacks, which are worsening the humanitarian crisis in the area.

"In Idlib, we are working with Russians to ensure a cease-fire, but it is not easy to sustain. We expect Russia to abide by the commitments of the cease-fire as the regime's guarantor. Our president has reminded (Russian leader Vladimir) Putin of that," Çavuşoğlu said.

The latest offensive has brought Assad's military campaign closer to the heavily populated central areas of Idlib, where nearly 3 million people are trapped, according to aid charities and U.N. agencies. Despite a cease-fire brokered through Turkey's efforts, which was announced Jan. 10 and set to start just after midnight Jan. 12, the attacks by the Syrian regime and Russia have not stopped. Only days after the cease-fire went into effect, people were again fearing for their lives.

Since then, more than 1,300 civilians there have been killed in attacks by the regime and Russian forces as the cease-fire continues to be violated.

The number of displaced residents of Idlib continues to rise as assaults on civilian settlements continue. These displaced individuals are forced to live in poor conditions in mud camps with no hygiene and a lack of food, water and health services.

One of the civilians living in a mud camp north of Syria explained that the camps were set up on two sides of a mud lake, which was rendering the lives of refugees difficult. "If someone were to get sick or have a heart attack, he would die until we get him on the other side of the road," Abdulkadir Annan said.

The 65 families who live in tents on the mud lake have no means to keep themselves warm.

"As you can see, these tents are not suitable for winter. They need to be changed, or they need to be covered with another tarpaulin to stop the rainwater from coming inside the tents," Annan added.

Turkish aid institutions, coordinated by the Disaster and Emergency Management Authority (AFAD), raised over TL 150 million to aid the people of Idlib.

"So far, more than 600 trucks carrying humanitarian aid have reached the needy in Idlib setting out from Hatay," Interior Ministry spokesman İsmail Çataklı stated during a meeting with nongovernmental organizations and AFAD on Wednesday.

The number of newly displaced people from Ma'arrat An Nu'man, Kafr Nobol, Heish, Ehsem, Saraqab, and Khan Shaykun to Atareb, Daret Azza, Dana, Ariha, Idleb, Saraqab had increased to 367,000 by December, the U.N. Office for the Coordination of Humanitarian Affairs (OCHA) indicated.

Another Turkish aid institute, the Humanitarian Relief Foundation (IHH), has also started to build briquette houses for Syrian refugees fleeing conflict zones as a more stable and permanent alternative to tents in areas near the border. More than 120 houses have been built so far, Syria coordinator of IHH Zeki Tahiroğlu stated Sunday during an aid campaign for Idlib in Turkey's Afyonkarahisar province.

"We have collected a fund that would enable us to build more than 4,000 briquette houses within the scope of the project," he added. The houses are 24 square kilometers, and the IHH plans to enable 10,000 families to live in houses in the first phase of relief efforts. According to the aid group's most recent statement on Wednesday, the project is taking place in a village 5 kilometers to the border.

"In a few days, we will be able to host 60,000 people in our briquette houses the construction of which continues," said vice chairman of the group Serkan Nergis.