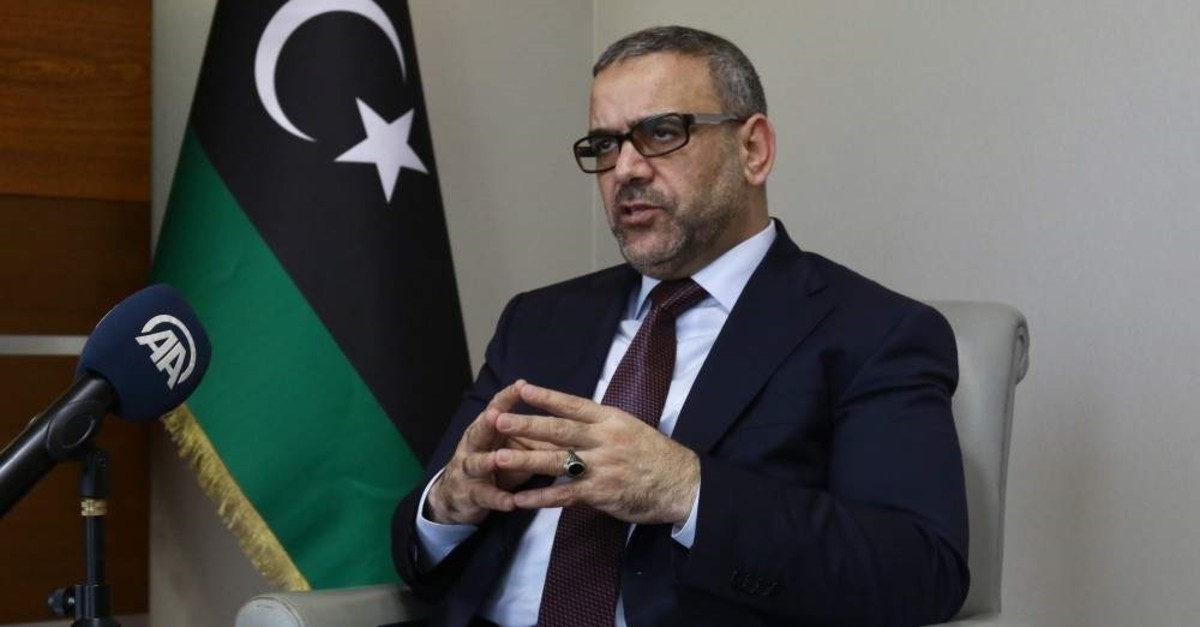 Speaking to the Anadolu Agency (AA), al-Mishri evaluated the recent cease-fire talks in Moscow and at the Libya conference in Berlin.

Underlining that Libya's legitimate actors were flexible in the Moscow talks initiated by Turkey and Russia's joint efforts to stop violence in Libya, al-Mishri said everyone witnessed that Haftar made up excuses to leave the table.

Libya's High Council of State, an executive and advisory body, was formed as part of the Libyan Political Agreement (Skhirat Agreement) signed on Dec. 17, 2015, in Skhirat, Morocco to end the civil war in the country under the guidance of the U.N.

On Jan. 12, the conflicting parties in Libya announced a cease-fire in response to a joint call from Turkish and Russian leaders. However, the talks for a permanent cease-fire deal ended without an agreement after Haftar left Moscow without signing the deal.

On Sunday in Berlin, Haftar accepted the task of designating members for a U.N.-proposed military commission with five members from each side to monitor the implementation of the cease-fire.

Since the ouster of late ruler Moammar Gadhafi in 2011, two seats of power have emerged in Libya: Haftar in eastern Libya, supported mainly by Egypt and the United Arab Emirates, and the Government of National (GNA) in Tripoli, which enjoys U.N. and international recognition.

Haftar violated all the deals reached in Libya so far, the head of the High Council said.

The "guilty should be punished rather than be rewarded," he added, criticizing the lack of guarantee mechanisms to force Haftar to abide by cease-fire deals promoted by international talks.

"A real agreement cannot be achieved without sanctions imposed against parties violating deals," he added.

More than 280 civilians and 2,000 fighters have been killed since the beginning of Haftar's assault on Tripoli, according to the U.N. The fighting has displaced some 146,000 people, with the ongoing violence threatening to plunge Libya into violent chaos to rival the 2011 conflict that led to the ousting and murder of longtime dictator Moammar Gadhafi.

"We are politically very flexible in Libya and eager to leave the transition period behind and go to general elections. However, it is not possible for us to allow Haftar or other putschist military elements to continue their activities," he explained.

He said that legitimate Libya forces will not refrain from resisting against Haftar forces' hostile attacks.

Another topic that al-Mishri mentioned was the bilateral relations between Turkey and Libya. He described the partnership between the two countries as "not temporary, it is strategic."

Ankara is joined by Italy and Qatar in supporting Prime Minister Fayez al-Sarraj's legitimate government in Tripoli. Meanwhile, the rival illegitimate Haftar force based in the east is supported by France, Russia, Jordan and the UAE, alongside other key Arab countries.

Libya and Turkey signed agreements in November outlining cooperation in terms of security and maritime affairs, angering Mediterranean countries, including Greece and the Greek Cypriot administration, as the diplomatic maneuver prevents them from unilaterally exploiting energy resources in the region. Last month, Turkey's Parliament also passed a motion allowing the government to send troops to Libya.

Libya's legitimate government recently made a formal request for "air, ground and sea" support from the Turkish military to help fend off an offensive by Haftar's forces, which are attempting to take control of the capital, Tripoli. Turkey supports the U.N.-backed government against the militia and mercenaries of the latter self-proclaimed military chief.