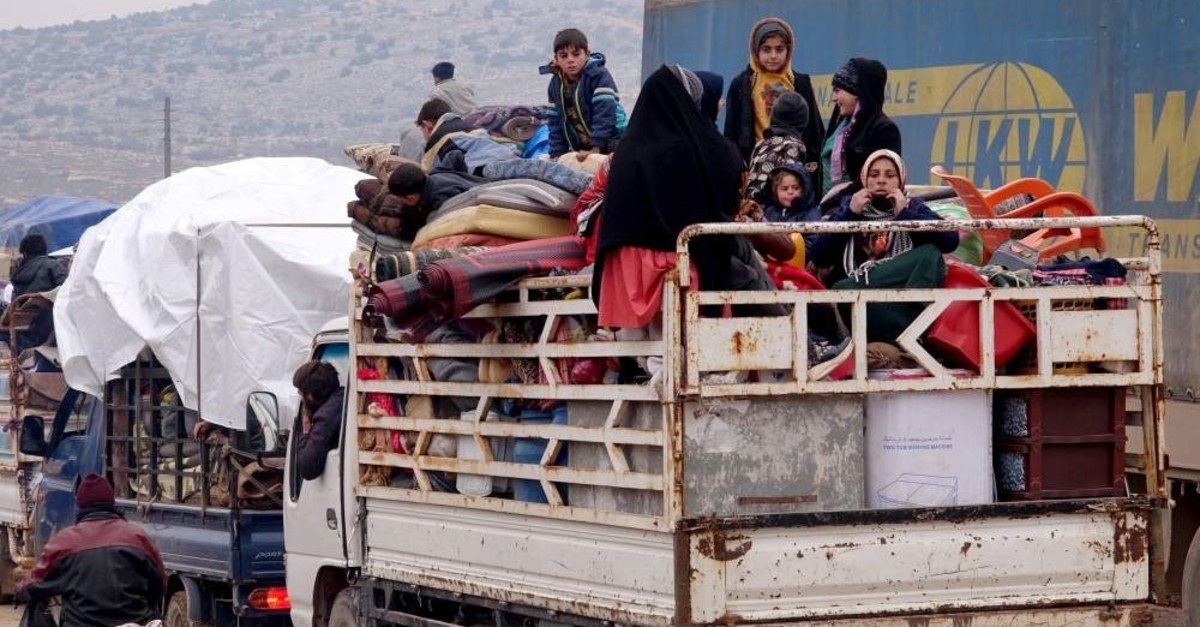 The attacks by the Bashar Assad regime and Russia on northwestern Syria's Idlib province have caused another 36,000 civilians to flee toward the Turkish border.

The displacement of civilians has been intensifying since mid-December when the Assad regime started a new assault to seize the last opposition bastion. It is estimated that over 1 million Syrians have moved near the Turkish border due to intense attacks over the last year, while half of this number was displaced after November 2019.

According to the White Helmets civil defense group, nine civilians died Wednesday in Idlib's districts, while it is feared that the death toll could rise as attacks continue.

"Scenes of intensive shelling with barrel bombs by regime helicopters on the ghost town of #MaaratalNuman in #Idlib, this afternoon. 15 airstrikes, 14 barrel bombs, and more than 100 artillery shells targeted the city today, causing major damage to civilians' homes and property," the White Helmets wrote on Twitter late Wednesday.

The latest attack raised the number of people who have died in the last two days to at least 40.

Turkish institutions and nongovernment organizations have stepped up their efforts for the humanitarian disaster recently as many displaced individuals live in harsh conditions lacking basic necessities. Hundreds of trucks of humanitarian aid have been sent, camps were built and work on permanent housing facilities continues.

Since then, more than 1,300 civilians have been killed there in attacks by the regime and Russian forces as the cease-fire continues to be violated.

The conflict in Idlib dates back to the beginning of the civil war, as the province slowly turned into a hub for the opposition and later became the only opposition stronghold in the whole country. Idlib, which received massive migrant flows through internal displacement and reached a population as large as 4 million, was taken over by opposition forces in 2015 for the first time. Since then, it has become a continual target for regime attacks.

EU urged to end the targeting of civilians in Idlib

Mounting civilian casualties of the offensive in ⁦Idlib⁩ are unacceptable and the targeting of civilians must stop, lead Spokesperson for Foreign Affairs and Security Policy Peter Stefano said in a written statement on Thursday.

"The renewal of the offensive in Idlib, including repeated airstrikes and shelling targeting civilians are unacceptable and must cease. The EU will keep the sanctions against the Assad regime under review as long as these brutal attacks continue," the statement said.

The EU further stated that the presence of U.N.-listed terrorist groups in Idlib is an issue of concern for all but that fighting these groups does not permit international humanitarian law to be ignored.

The Assad regime and Russia generally conduct their attacks under the pretext of fighting al-Qaida-linked Hayat Tahrir al-Sham (HTS) terrorists holed up in Idlib.