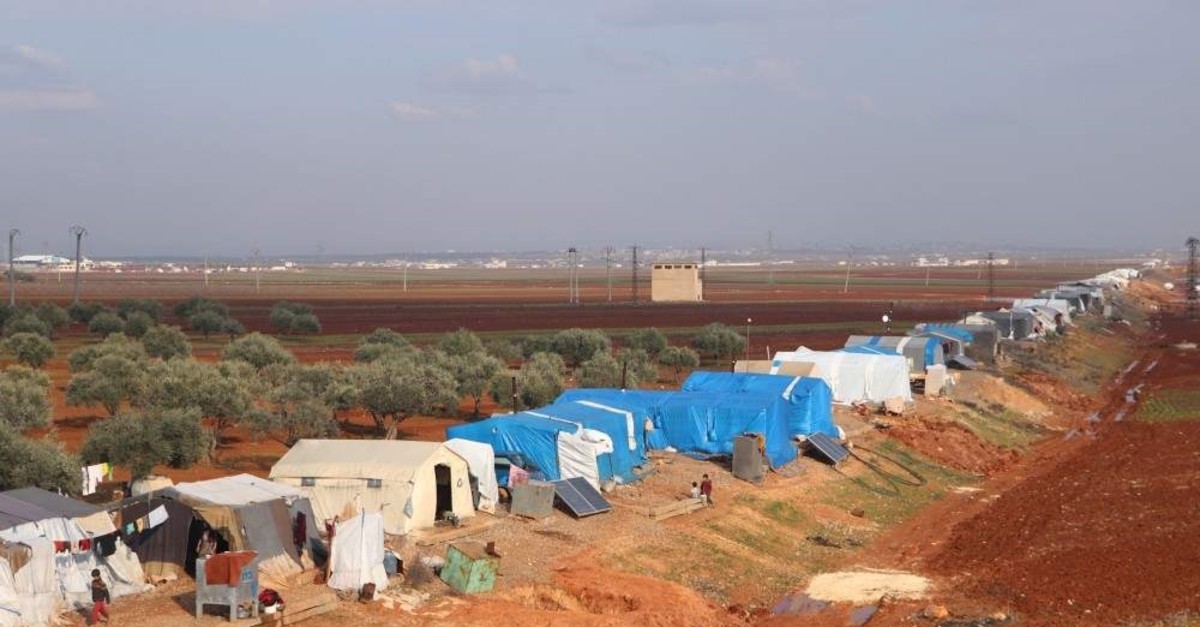 Around 1,200 refugees have built a small community on old train rails that used to link Aleppo to Lazikiyah before the civil war, portraying the humanitarian tragedy and the harsh conditions civilians face in their survival. (AA Photo)
by Daily Sabah with AA Jan 24, 2020 7:30 pm

Syrians displaced by the Bashar Assad regime and Russia's attacks on civilian settlements fled toward the Turkish border, where they struggle to continue their lives in poor conditions and try to make ends meet through their own means.

Those living in the camps, mostly women and children, try to get by partially with solar panels and small vegetable gardens. The families planting green vegetables such as parsley, lettuce and peppergrass are meeting their nutritional needs while also utilizing solar panels which enable them to use some small electrical devices.

The cold winter weather, continuous rain and snow and the lack of food, fuel and shelter are only some of the elements that contribute to the already suffering families' sorrow.

Around 1,200 refugees have built a small community on old train rails that used to link Aleppo to Lazikiyah before the civil war, demonstrating the humanitarian tragedy and the harsh conditions civilians face while trying to survive.

One of the refugees of Idlib, Ayyuş Huseyin Um Ali told Anadolu Agency (AA) that he had to leave his home due to the Assad regime and its backers' attacks three years ago.

"We settled on this line that is relatively high due to the mud. We have been constantly migrating for three years. Our house, our vineyards, all is left behind," Um Ali said, adding that they are lucky to have found a place on the railway route.

Ahmet Sincari, who also had to leave his home due to the assaults, said: "We set up our tent here in order to protect ourselves from mud and floods. Those who find a place on the railway settle here."

The displacement of civilians has been intensifying since mid-December when the Assad regime started a new assault to seize the last opposition bastion. It is estimated that over 1 million Syrians have moved near the Turkish border due to intense attacks over the last year, while half of this number was displaced after November 2019.

Yet, surviving the attacks is not enough to ensure safety. The civilians who reach the Turkish border after fleeing regime attacks are having difficulties finding proper places to settle since the refugee camps are almost full as well as the temporary shelters. Besides, the tent cities lack infrastructure, and most tents flood due to heavy rains during winter months, rendering them unusable.

As the migration of Syrians from Idlib and nearby Aleppo continues due to endless attacks on civilians these days, a mother of two tries to hold on to life along with her disabled husband in a safe zone near the Turkish border. Ayşe El Suri, her two disabled daughters and husband who have been affected by the bombings are living together in a camp.

"We came to the safe points here two years ago after fleeing bombardments. One of my daughters is mentally disabled and cannot stand up. My other daughter can hardly stand up due to a problem since birth and cannot lift anything since she already walks with difficulty. My husband cannot walk and speak as he was affected by the bombardment," El Suri said, indicating that they were tired and had migrated to three other places before this one.

After almost nine years of conflict, forcible displacement and torture, Syria is in dire need of humanitarian aid. Despite the efforts of many nongovernment organizations from around the world as well as countries like Turkey, the amount of aid reaching the war-torn country is still low, prompting the international community to come up with new initiatives to solve the problem.

"Four million people live in northwest Syria, of which 2.8 million are estimated to be in need of humanitarian assistance. Women and children are estimated to make up 76% of this population. The main needs of the most recently displaced individuals are nonfood items, shelter, food and cash assistance. Currently, almost half of those newly displaced are living with host families and rented houses, while 32% are living in camps or individual tents," a report of the U.N. Office for the Coordination of Humanitarian Affairs (OCHA) published on Jan.15 said.

The U.N. emphasized further that conditions for refugees are worsening due to cold weather, with the need for emergency assistance such as health services for chronic illnesses and maternal care. "The winters, in particular, are adding another layer of urgency to the situation with frequent flooding affecting camps and informal settlements and many families seeking shelter in unfinished buildings," the report added.

The U.N. special envoy for Syria Geir Pedersen on Friday called the humanitarian situation in the conflict-hit province of Idlib "a disaster" during a speech at a meeting with Russian Foreign Minister Sergey Lavrov in Moscow.

He asserted the normalization in Idlib as a key component for the return of refugees back to Syria.

"The problem is that more than 50% of the population of Syria left their homes. So what we want to achieve now is to create a situation where they start to return. Then we need the political process to stabilize the situation in Idlib," the envoy said, adding that 700,000 people have been displaced since last April and more than 1,500 civilians have been killed.

"We understand the challenges when it comes to fighting terrorism, but we have also been reiterating that the price that the civilian population is paying is too high."

The Assad regime and Russia generally conduct their attacks under the pretext of fighting al-Qaida-linked Hayat Tahrir al-Sham (HTS) terrorists holed up in Idlib.

The envoy praised the establishment of the Syrian Constitutional Committee as "an important step forward." Yet, most recently the Syrian regime had brought the negotiations to halt due to their nonconstructive stance.

"The establishment of the constitutional committee was for the first time where the two parties agreed on a written document. It's the basis for coming together and negotiating. And it was also a way for the two parties to recognize each other," he said.

The most recent attempt, the Syrian Constitutional Committee, which was seen as a historic step toward peace in Syria and has received support from the international community, is to be made of 150 members, with 50 regime delegates, 50 opposition members and 50 civil society members chosen by the U.N. envoy to Syria. The launch of a process for a new constitution and the formation of the committee started at a conference in Russia in January 2018. However the parties failed to reach an agreement due to Syria's refusal to continue on the first day of the second round of talks.

Pedersen added that the interactions within the format is a way "to build confidence between the parties."

"We understand that it will take time. We are not rushing this, and we hope it will help the broader political process and improve the lives of the Syrians that live in the country and push the return of refugees," he said.

Pedersen also announced his visit to Damascus next Wednesday, Jan. 29 where he will conduct talks with the Syrian government.