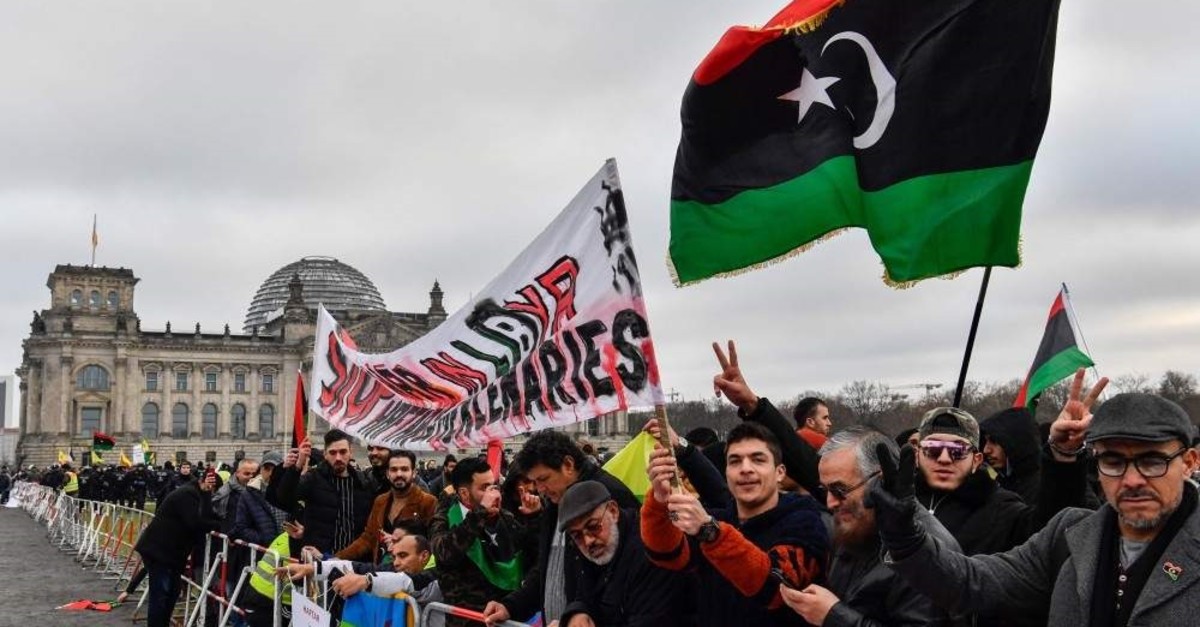 Protesters hold a banner reading ,Stop war in Libya, Haftar and mercenaries, during a protest in front of the Reichstag building during the Peace summit on Libya at the Chancellery in Berlin, Jan.19, 2020. (AFP)
by Ayşe Betül Bal Jan 24, 2020 2:22 pm

Ottoman-descended Turkish people in conflict-ridden Libya have been subject to wrongful accusations, extrajudicial persecutions and forced displacement by warlord Haftar

Conflict-embroiled Libya is home to over a million Ottoman-descended Turkish people who have become the target of warlord Khalifa Haftar and his Gulf allies.

They are called “Kuloğlu Turks,” also known as “Kouloughlis,” a term used during the Ottoman period to designate the mixed descendants of Turkish men, mostly Ottoman military officials, and local North African women.

Though there was no apparent division between indigenous Libyans and foreigners, including the Turks, the race difference is now deliberately demarked by those loyal to Haftar mainly because of their support for Libya’s U.N.-backed legitimate government, said Ali Sait Akın, former consulate general in Benghazi, in an exclusive interview with the Daily Sabah.

Kuloğlu Turks – made up of several different ethnicities, including Albanian or Circassian – that composed the Ottoman Muslim population in the past, had mostly inhabited large cities in the country, such as Tripoli, and Benghazi – the second largest city after the capital – along with the central coastal city of Misrata and Derna, Zliten, Khoms and Zawiya provinces.

Among the provinces where the Turkish population settled, Misrata holds the utmost importance and evolved as one of Haftar's main targets, Akın noted, highlighting that “one of the main reasons for that is the city formed a dominant power against (Muammar) Qaddafi and also forms the backbone of today’s legitimate government of Fayez al-Sarraj.”

When the late Libyan dictator, Qaddafi, was ousted from power in 2011, two competing powers emerged in the conflict-ridden country: eastern-Libya based putschist Gen. Haftar who enjoys support from a variety of militias from around Africa as well as Russian mercenaries, fighting under the Wagner umbrella group- and former Qaddafi army officials, as well as political support from the United Arab Emirates (UAE), France, Egypt and Saudi Arabia. Those countries, largely the UAE, also provide military equipment to Haftar, despite the U.N.-enforced arms embargo. The second one is the Tripoli-based National Government of Accord (GNA) led by al-Sarraj and backed by the U.N., Turkey, Qatar and Italy. Greece recently gave a green light for attempts to support Haftar, as a so-called retaliatory move against Turkey for signing agreement with the al-Sarraj government on delimitation of maritime jurisdictions in the East Mediterranean and on military support.

Militia groups in Misrata, indeed, played an important role in defeating the Qaddafi forces in Tripoli back in 2011, but now the city’s inhabitants are largely opposed to the ambitions of the Libyan warlord. When Haftar launched a recent campaign to capture the capital, locals from Gharyan, a strategic city located some 81 kilometers south of Tripoli, along with those from Misrata and Zuwara, poured into the streets in protest against Haftar’s provocative attacks.

Akın said Haftar provokes division between Turks and the locals. The general has intensified his campaigns to terrorize and demoralize Turkish residents since he gained power in the eastern parts of the country, Akın added.

He noted that as a result of the life-altering campaigns it is estimated that at least 100,000 Turkish-originated population have so far migrated to the western parts of the country especially after Haftar took control of Benghazi.

One of the ways Haftar persecutes the Turkish population in Misrata is by wrongfully accusing them of belonging to the Daesh terrorist organization and then executing them without a legal trial, Akın said.

In one exemplary case from October 2017, a family in the Al-Qawarishah neighborhood of Benghazi raided the house of their Turkish neighbors who were originally from Misrata, and seized their lands. Unable to take what they wanted, the family then falsely accused their Turkish neighbors of having links to Daesh and complained to a Libyan commander from Haftar’s army, Mahmoud Al-Werfalli, a serial killer wanted by the International Criminal Court over war crimes. All five members of the Turkish family were killed by Werfalli's forces when he and his men set fire to the Turkish family's house, their workplaces and their vehicles.

Akın stressed that similar cases are common in areas controlled by Haftar forces, adding that the volunteers armed by Haftar terrorize the neighborhoods, looting property belonging to Misratan families.

On April 4 Haftar launched an offensive on the Libyan capital seeking to overthrow the government of Prime Minister al-Sarraj, which claimed the lives of more than 280 civilians and 2,000 fighters, according to the U.N.

Earlier this month, President Recep Tayyip Erdoğan and his Russian counterpart Vladimir Putin called for a cease-fire in the oil-rich country. The matter was then discussed by world powers during the Berlin summit in an effort to find a political solution between the warring sides. Despite the international communities’ urging for a peaceful solution, however, Haftar continues to block any attempts for peace, further escalating the conflict with a bold confidence, which he draws from his “protecting powers,” namely the UAE and France. His actions highlight the importance of Turkey’s diplomatic efforts to protect Libyan civilians, including Turkish residents.