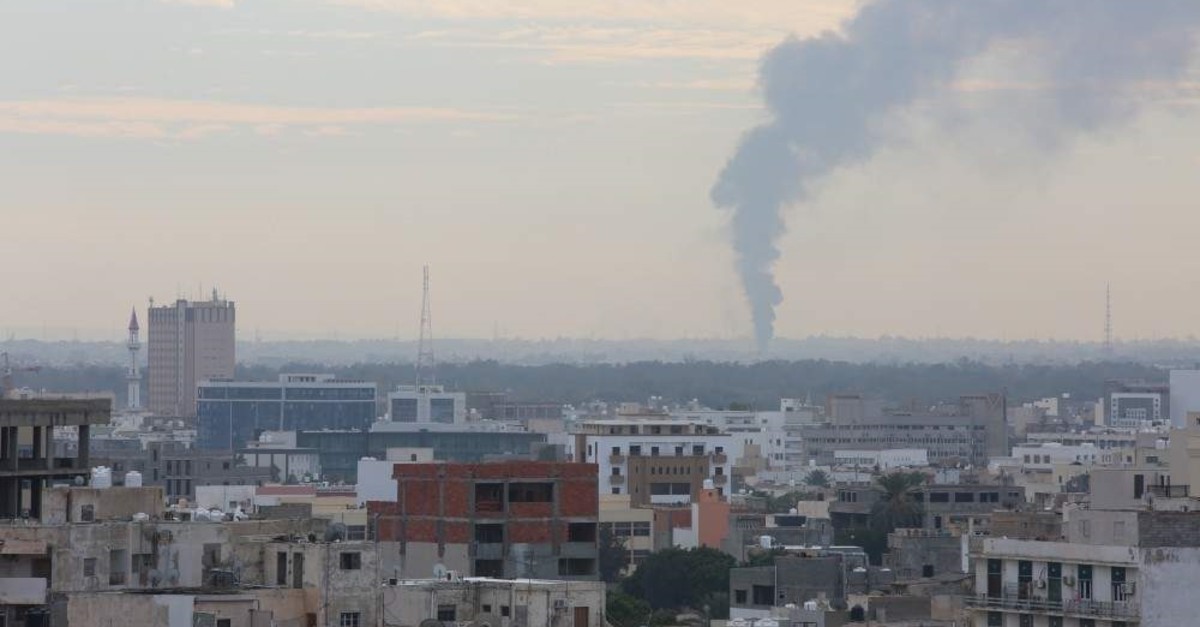 Gen. Khalifa Haftar continues to attack the Libyan capital Tripoli in breach of a cease-fire and ignore calls from the international community for a truce (AA Photo)
by Daily Sabah with AA Jan 24, 2020 4:39 pm
Forces loyal to putschist Gen. Khalifa Haftar attacked the Libyan capital from the city's southern Hallatat front, ignoring the calls for a cease-fire, Abdulmalik al-Madani, a spokesman for the forces of the Tripoli-based Government of National Accord (GNA) said.

On Sunday, German Chancellor Angela Merkel and U.N. Secretary-General Antonio Guterres co-hosted the Berlin conference, which sought a stronger commitment from world powers and regional actors to noninterference in Libya, genuine support for the cease-fire and adherence to the U.N.'s arms embargo – yet no concrete result was achieved.

Madani, who said that bombings could be heard starting from early hours on Thursday, indicated that the Haftar's forces tried to gather and advance from their position in Tripoli's southern Ramla district. Madani told Anadolu Agency that they did not permit these moves and that GNA forces pushed back these militias.

The spokesman further explained that clashes took place from time to time as GNA forces tried to eliminate the Haftar militias' mortar and artillery attacks.

On Jan. 12, the conflict parties announced a cease-fire in response to a joint call by the Turkish and Russian leaders. But the talks for a permanent cease-fire deal ended without an agreement after Haftar left Moscow without signing the deal.

On Sunday Haftar agreed to designate members to a U.N.-proposed military commission with five members from each side to monitor implementation of the cease-fire.

Since the ousting of late ruler Moammar Gadhafi in 2011, two seats of power have emerged in Libya: One in eastern Libya supported mainly by Egypt and the UAE, and the other in Tripoli, which enjoys U.N. and international recognition. The GNA led by al-Sarraj has been under attack since April from Haftar's forces, with fighting killing over 280 civilians and 2,000 fighters.

Meanwhile, the capital's only operational airport, Mitiga, reopened Thursday after it had been threatened by Haftar.

In a recent development in the conflict-ravaged country, flights were suspended late Wednesday after forces loyal to Haftar declared Tripoli and surrounding areas a "no-fly zone" and threatened to down any aircraft, including civilian commercial passenger flights, dealing another setback to peace efforts.

Ahmed Al-Mismari, the spokesman for Haftar's forces, said Wednesday on social media that the forces declared off-limit an area from Giryan, 120 kilometers south of the capital city, to Terhune city, 90 kilometers southeast and to Tripoli beach, including Mitiga Airport, which militias bombed with six Grad missiles earlier in the day.

The airport has been hit multiple times since the start of a monthslong offensive by militias led by eastern-based Haftar to seize Tripoli from the U.N.-recognized GNA.

'Libya should not become next Syria'

German Chancellor Angela Merkel on Thursday called on the international community to make stronger efforts for peace in Libya to prevent the country from descending into a proxy war between regional actors.

"We have to be very careful that what happened in Syria would not happen again in Libya," Merkel said at the World Economic Forum in Davos, warning against the devastating consequences of a deepening proxy war.

The German chancellor said the Libya peace conference hosted by her government on Sunday was an attempt to contribute to a political solution and stressed that its success was dependent on the continued support by world powers and regional actors of this process.

"We have to be vigilant about these peace processes; we have to care for them, despite all the difficulties," she stressed.

Meanwhile, Libya's neighbors seek a solution to the crisis that is unfolding across their borders. Top diplomats from Egypt, Sudan, Chad, Niger, Algeria, Tunisia and Mali came together in the Algerian capital on Thursday to discuss solutions to the conflict, while other international efforts also continue.

"Libya has been in turmoil. The conflict there has increasingly turned into a proxy war by foreign powers that are far away and much less affected by what is happening," said German Foreign Minister Heiko Maas, who also took part in the meeting.

"It is, therefore, the neighbors that have the most interest in peace and stability in Libya," he said.

Some of the neighboring countries have seen a surge in migrants running from the crisis in their country and thus have been affected as well.
RELATED TOPICS