Half a million Syrians have fled toward Turkish border since November 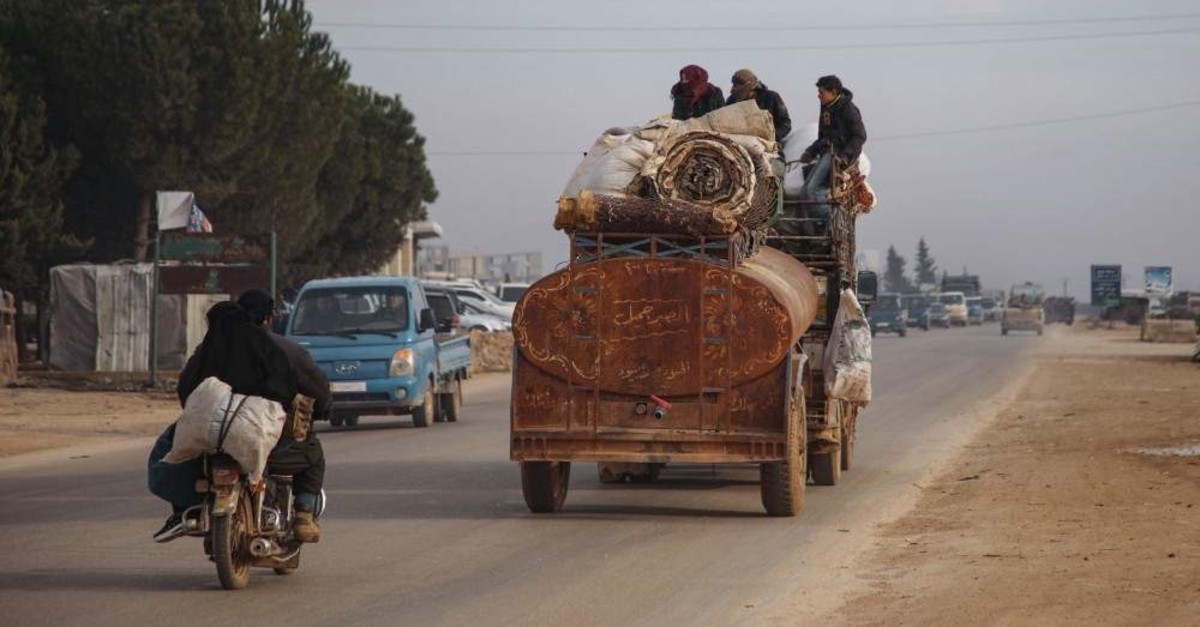 People flee from the south of Idlib amidst an ongoing regime forces' offensive, driving through the town of Hazano in the northern countryside of Syria's Idlib province, Jan. 27, 2020. (Photo by AAREF WATAD / AFP)
by Daily Sabah with Agencies Jan 27, 2020 4:39 pm
More than 500,000 civilians have fled from intense regime attacks in Idlib toward relatively safer areas near the Turkish border since November, while regime forces were poised Monday to soon enter Maaret al-Numan, a city of symbolic and strategic importance located in the last opposition bastion, triggering further migration waves.

As sources on the ground reported, Maaret al-Numan has almost become a ghost town. Fearing further regime advances residents of the town of Saraqib, located more than 30 kilometers north of Maarat al-Numan, have also started to flee toward the border with Turkey.

Due to the recent wave of migration, the number of displaced civilians who had to flee Idlib province and nearby regions has reached 502,000 since November 2019, while 21,000 of them were reported over the last 24 hours.

Most of the displaced civilians have moved toward refugee camps near the Turkish border. Some of the displaced have taken shelter in regions liberated by terrorist elements via Turkey's cross-border anti-terror operations.

Turkey carried out two cross-border operations west of the Euphrates river, Operation Euphrates Shield launched in August 2016 and Operation Olive Branch in January 2018, to drive terrorist groups, including the YPG and Daesh, from its borders.

Due to overcrowding and lack of essential infrastructure in refugee camps, displaced civilians have great difficulty in finding places to take shelter. Thousands of families are in dire need of humanitarian aid as they struggle to live under harsh winter conditions.

Senior U.N. officials said this month that the humanitarian situation had become more acute with at least 300,000 civilians now on the run in Idlib province, adding to the more than half a million people who fled earlier bouts of fighting to the safety of camps near the Turkish border.

Since Dec. 1, some 358,000 Syrians have been displaced from their homes in Idlib, the vast majority of them women and children, according to the United Nations.

Turkish institutions and nongovernmental organizations have stepped up their efforts for the humanitarian disaster recently as many displaced individuals live in harsh conditions lacking basic necessities. Hundreds of trucks of humanitarian aid have been sent, camps have been built and work on permanent housing facilities continues.

Aid agencies and relief groups have warned that further violence could fuel what may potentially become the largest wave of displacement seen during Syria's nine-year civil war.

Maaret al-Numan is a strategic prize lying on the M5 highway linking Damascus to Syria's second city Aleppo, a main artery coveted by the regime.

It is also the second-largest city in the beleaguered northwestern province of Idlib, the last stronghold of opposition forces and home to some 3 million people – half of them displaced by violence in other areas.

Regime forces have since Friday seized around 14 towns and villages around the city, reaching its eastern outskirts, the Britain-based Syrian Observatory for Human Rights said Monday.

Syrian regime forces have also cut off the M5 highway leading north from Maaret al-Numan to Idlib city, according to the Observatory and the pro-regime Al-Watan newspaper.

Retaking full control of the M5 highway is essential to the regime's efforts to rekindle a moribund economy.

Abdul Rahman said Damascus loyalists were now pushing from the west and northwest in a bid to tighten the noose around the opposition holdout.

An Agence France-Presse (AFP) correspondent in the region said regime forces were also trying to reach the city's southwestern edges to prevent opposition forces from falling back.

The regime of Bashar Assad has repeatedly vowed to reassert control over the whole of Syria, despite several cease-fire agreements.

Maaret al-Numan was an early hub of support for what started as demonstrations against Assad's rule in 2011.

A cease-fire announced by the joint efforts of Ankara and Moscow earlier this month was supposed to protect Idlib from further attacks, but it never took hold due to the regime's constant violations.

Syrian regime forces now control around 70% of the country.

Recently, a U.N.-supported shelter center hosting nearly 3,300 civilians in Idlib was evacuated Monday due to the threat of further regime attacks. The center was supported by the U.N.'s local aid agencies and mostly hosted the disabled, children and elderly.

Regime forces backed by Russia in Syria carried out new airstrikes in the northwestern Idlib de-escalation zone, killing at least five civilians, according to a Syrian civil defense group.

The White Helmets civil defense group said the regime airstrikes killed three civilians -- including two in Bzabor village and one in Sarakib city. The two other civilians were killed in Russian airstrikes in Shinan village, it added.

In September 2018, Turkey and Russia agreed to turn Idlib into a de-escalation zone in which acts of aggression are expressly prohibited. But more than 1,300 civilians have been killed in attacks by the regime and Russian forces in the de-escalation zone since then as the cease-fire continues to be violated.

More than 1 million Syrians have moved near the Turkish border due to intense attacks over the last year. Since the eruption of the bloody civil war in Syria in 2011, Turkey has taken in some 3.7 million Syrians who fled their country, making it the world's top refugee-hosting country.
RELATED TOPICS