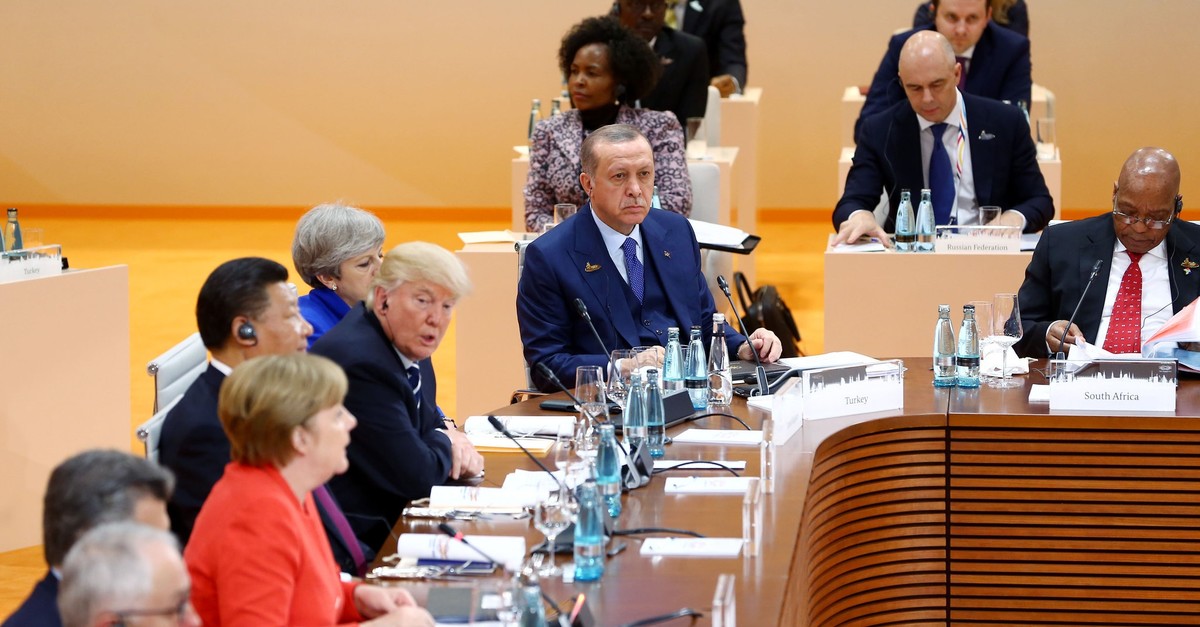 |u00a0AA File Photo
by Daily Sabah with Agencies Jan 28, 2020 8:41 am
Former National Security Advisor John Bolton privately told the U.S. attorney general last year about concerns that President Donald Trump was essentially granting favors to President Recep Tayyip Erdoğan and Chinese President Xi Jinping, The New York Times reported Monday.
The newspaper said the revelations concerning the leaders of China and Turkey came in an unpublished book manuscript by Bolton.
The same manuscript says Trump told Bolton that he wanted to continue freezing $391 million in security aid to Ukraine until officials there helped to investigate his political rivals, the Times previously reported.
Those allegations have roiled Trump's impeachment trial that is ongoing in the U.S. Senate.
According to the Times' latest report, Attorney General Bill Barr responded to Bolton's concerns by pointing to Justice Department investigations of companies in Turkey and China. Barr said he himself was worried that it appeared that Trump had undue influence over what would normally be independent inquiries, Bolton's manuscript said.
Bolton wrote that Barr singled out the president's conversations with his Chinese counterpart Xi about the Chinese telecommunications firm ZTE.
Trump personally intervened in May 2018 to order his commerce department to ease penalties against ZTE that had pushed it to the verge of collapse.
U.S. officials had accused the company of violating sanctions against Iran and North Korea.
Barr also cited remarks Trump made to Erdoğan in 2018 about the U.S. investigation of a Turkish bank, the Times report said.
Halkbank was criminally charged with participating in a multibillion-dollar scheme to evade U.S. sanctions against Iran, while the Turkish bank denied any wrongdoing.
Halkbank said the case was introduced to punish Turkey for its anti-terror operation in northern Syria.
The charges "were filed as part of the sanctions introduced against our country by the U.S. government in response to Operation Peace Spring, heroically launched by the Turkish army to secure our borders and establish peace in the region," Halkbank said in a statement.
The judge previously presided over a criminal case against Turkish-Iranian gold trader Reza Zarrab and Halkbank Deputy General Manager Mehmet Hakan Atilla. Zarrab had sought Berman's recusal on the grounds that he had made statements critical of the Turkish government while attending a 2014 symposium in Istanbul organized by groups linked to the Gülenist Terror Group (FETÖ), which went onto stage the July 15, 2016 coup attempt through its operatives in the military.
Zarrab pleaded guilty before trial and testified against Atilla, who was arrested in March 2017 while on a business trip in the U.S. and was later convicted and sentenced to 32 months in prison.
When Atilla was convicted, Turkey blasted the verdict as "a scandalous decision in a scandalous case" and "a conspiracy aimed at complicating Turkey's internal politics and intervening in Turkey's internal affairs." Ankara has repeatedly criticized Atilla's conviction, calling it "politically motivated."
Atilla returned to Turkey in July after serving his sentence and has recently been named general manager of the country's main stock exchange Borsa Istanbul (BIST).
U.S. prosecutors have claimed that Zarrab, Atilla, Halkbank and multiple Turkish government officials took part in a scheme between 2012 and 2016 to help Iran spend revenue from oil and gas sales abroad using sham food and gold transactions, in violation of U.S. sanctions.
At the time of Atilla's trial, Erdoğan condemned the case as a political attack on his government.
Pressure has mounted on Republicans to call Bolton as a witness at Trump's impeachment trial since the Times reported Sunday on his revelations about the Ukraine aid.
White House Press Secretary Stephanie Grisham told Fox Business Network on Monday night that Bolton was "clearly... trying to sell a book."
Trump fired Bolton last September.
Bolton's strident opposition to Trump's negotiating with Iran, North Korea and the Taliban eventually forced his ouster – though he insists he resigned.
Last Update: Jan 28, 2020 12:15 pm
RELATED TOPICS