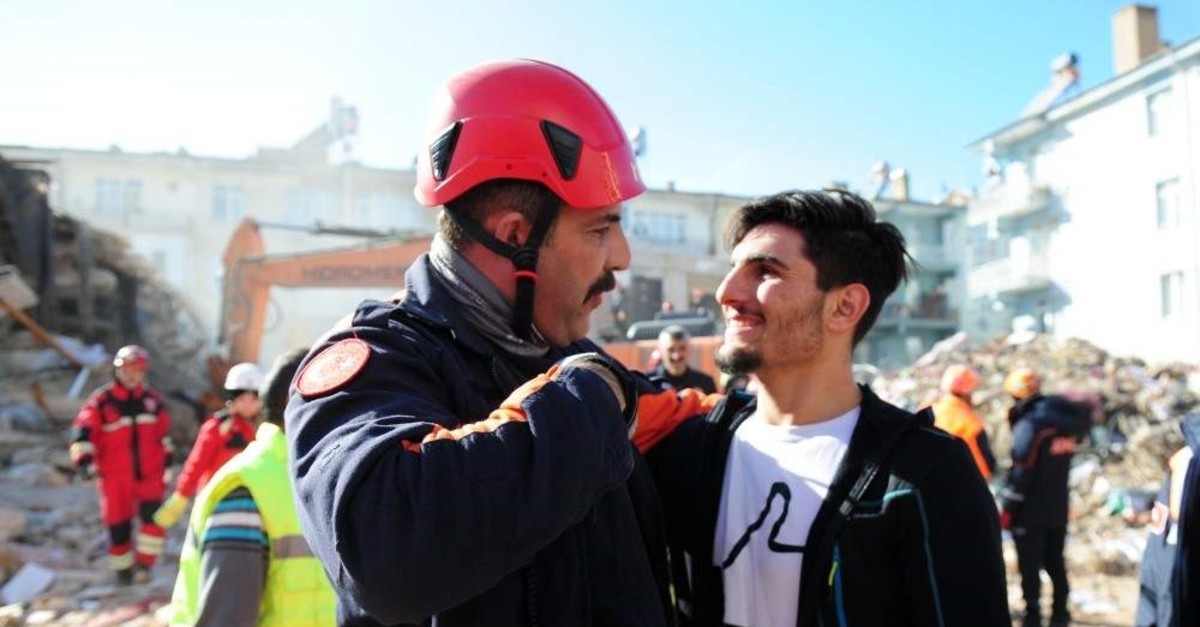 A Syrian man who rescued a family trapped under the debris of their house following a major earthquake in Turkey's Elazığ province will be granted Turkish citizenship upon the instructions of President Recep Tayyip Erdoğan, reports said Tuesday.

The president announced that Turkey will grant citizenship to Mahmoud al-Osman and his family.

"Of course we will grant him citizenship. He's a student here and knows how to speak Turkish too. His family will also become citizens," Erdoğan told journalists on his way to Senegal as part of his Africa trip.

Osman welcomed the news with joy, saying that he is extremely happy to become a citizen, but adding that he did not expect anything in return for his selfless act.

"I will be honored," he said. "I would do the same thing if this happened anywhere in the world."

He said he hoped his act had a positive effect on the perception of Syrian people in Turkey.

Al-Osman, who arrived from Syria's Hama to continue his studies in Turkey two years ago, saved a couple trapped in the debris of their house. Dürdane Aydın, whose video went viral as she described how a young Syrian saved her life, was later able to reunite with the young man she knew only by his first name, on Sunday, hours after she and her husband Zülküf were brought to a hospital for treatment. Anadolu Agency (AA) located Osman and arranged a meeting between the couple and a Syrian man, who arrived in Elazığ three months ago to attend university from Hatay, the southern province in which he took shelter after fleeing war in Syria. Osman was out jogging when the earthquake struck Elazığ on Friday evening. He was passing by Sürsürü neighborhood where several buildings collapsed in the earthquake. "I heard people screaming from the rubble. I tried to remove the debris with my hands, and soon others came to help me. We first removed a man, and then I tried to remove the debris that fell on the woman," he recounted. Osman himself was injured while trying to move the debris, but he dismissed it. "This is nothing for me. It matters more to have her rescued," he said. 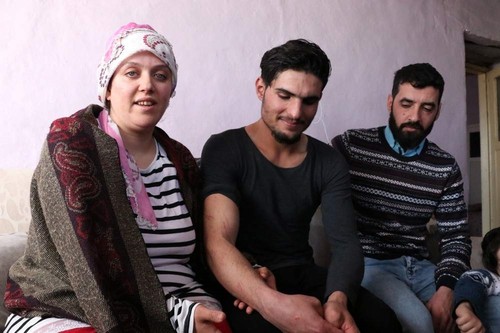 Mahmoud al-Osman reunites with the Aydın couple at their parents' home in Elazığ province. (AA Photo)

Dürdane Aydın was emotional when she saw the photos of Osman that AA correspondents showed her to confirm if he was the young man who rescued her. "This is the boy. I can't forget his eyes," she exclaimed. The couple and their rescuer reunited in the house of the couple's parents in a village in Elazığ. Aydın burst into tears when she saw him with scars on his arms. When Aydın found out that Osman left his mother back in Syria, she said: "Don't worry. I am now your mother and sister from now on."

"I couldn't imagine being rescued, but when we saw a light coming from above, my husband whistled," Aydın said, recounting the moments before their rescue. The light was from Osman's cellphone. "He first pulled my husband out and then helped me. I saw blood pouring from his hands, but he did not care: 'Sister, be careful, there is glass everywhere' he was telling me," she said. "He is our hero. I've been looking for him ever since we were rescued."

Zülküf Aydın said Osman did what few people could do, sacrificing himself to rescue others. "We were so desperate. Mahmoud helped us and the others under the rubble. We then looked for him around the collapsed buildings but could not find him," he said.