Children killed in Haftar attack on school in Tripoli 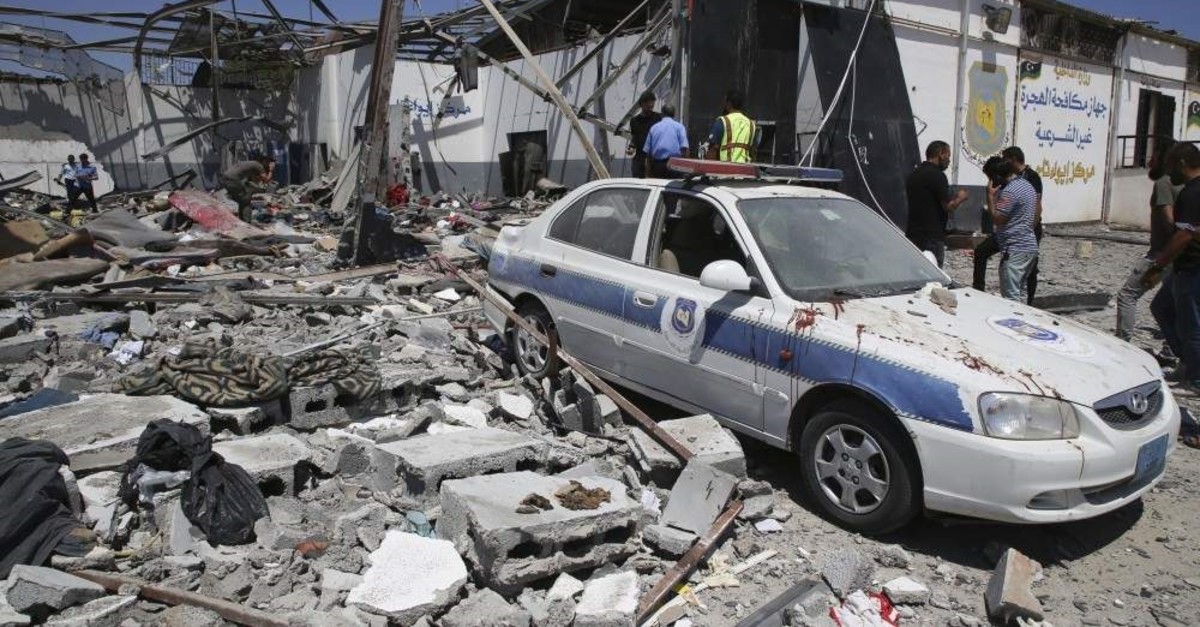 At least two children were killed and several others injured as Libya's eastern-based forces loyal to putschist Gen. Khalifa Haftar targeted a school compound in the capital Tripoli, the legitimate government of the country announced Tuesday.

"The tragedy occurred due to the fall of indiscriminate shells fired by the war criminal Khalifa Haftar, one of which landed in the backyard of a school in the Al-Hadba Badri area," said a statement by the Government of National Accord (GNA).

"Initial reports suggest a number of children were killed and injured," the statement added.

Earlier in the day, Libya's U.N.-recognized GNA announced that it had downed an armed drone belonging to the United Arab Emirates.

The forces of the GNA said in a statement that the armed drone was hit by ground defense systems over the city of Misrata, east of the capital Tripoli.

Issued with photos of the drone, the statement said the drone had targeted several civilian locations in Misrata.

In December, three people were killed in raids by drones operated by the UAE in Libya, according to the U.N.-recognized government.

Last August, the GNA downed a UAE armed drone, also over the city of Misrata.

In September, the GNA filed a complaint against the UAE at the U.N. Security Council, accusing Abu Dhabi of hostility and supporting Haftar against the legitimate government.

Since the ouster of late ruler Moammar Gadhafi in 2011, two seats of power have emerged in Libya: one in eastern Libya supported mainly by Egypt and the UAE and another in Tripoli, which enjoys U.N. and international recognition.

Since last April, Haftar's military offensive against Libya's internationally recognized government has claimed the lives of more than 1,000 people.

Haftar's forces moved toward the city of Misrata on Sunday, which is allied to the GNA, officials and residents said.

The increase in fighting came a week after Turkey, which backs the GNA in Tripoli, and the UAE, Egypt and Russia, which back Haftar, agreed with Western powers at a summit in Berlin to push for a lasting cease-fire and uphold an arms embargo.

On Jan. 12, parties in Libya announced a cease-fire in response to a joint call by the leaders of Turkey and Russia. But two days later in Russia, talks for a permanent cease-fire ended without an agreement after Haftar left Moscow without signing the deal.

"Haftar – who turned his back on both the Moscow and Berlin summits – is violating the cease-fire in Libya. If peace is to be established in Libya, he should be stopped," said Erdoğan.

"Haftar and his forces are playing a dirty game, and we are watching them. We will continue to do whatever is necessary," he added.

Erdoğan also said Tuesday: "We cannot say that the Libya crisis can be solved in a day; [Haftar] is not interested in finding a solution. Turkey wants the process in Libya to take a political turn rather than a military one."

U.S. President Donald Trump spoke on the phone with Erdoğan on Monday about the conflict in Libya and Syria's Idlib.

As diplomatic efforts for finding a political solution to the conflict in Libya continue, Russia urged the Libyan military committee to convene to address the issue of a cease-fire.

Deputy Foreign Minister Mikhail Bogdanov said Tuesday he expects dialogue within the format in Geneva to pave the way for lasting peace in the region.

"We urge that they convene as soon as possible. ... The main thing is to stop the fighting and establish an inclusive, inter-Libyan dialogue. The main and primary task is to initiate contact between Libyans so they reach a consensus on all these proposals," Bogdanov told reporters in Moscow.

When asked if Haftar is expected to come to Moscow in the near future, Bogdanov said the possibility could not be ruled out.

On Jan. 19, at the Berlin conference on Libya, Haftar agreed to designate members to a U.N.-proposed military commission with five members from each side to monitor the implementation of the cease-fire.

The decision to set up the Libyan military committee with five representatives from each side was a key result of the Berlin conference.

Meanwhile, the U.N. on Monday confirmed that foreign warplanes supporting eastern-based illegitimate forces led by Haftar in Libya are responsible for the killing of at least 53 migrants and refugees at a detention center near the capital Tripoli last July, calling for justice.

The conclusion came in a 13-page report published by the U.N. Support Mission in Libya (UNSMIL) and the U.N. Human Rights Office based on U.N. visits to the site, analysis of video footage and other evidence, as well as subsequent interviews with survivors and witnesses.

The joint report called for those responsible to be held accountable, urging Libyan authorities to "conduct independent, impartial and thorough investigations ... with a view to ensuring swift prosecution" of those behind the July 2 raids that left 53 dead and 130 wounded.

The report did not mention any foreign state in connection with the airstrike, but the United Arab Emirates has been accused of involvement in airstrikes. However, the UAE has denied these accusations. The legitimate GNA blames Haftar's forces, despite Haftar's denials.

According to the report, the airstrike at the Tajoura detention center, near the capital Tripoli, was one of the deadliest incidents since a new round of hostilities broke out in Libya last April, and deserved further investigation.

"As I have said previously, the Tajoura (suburb) attack, depending on the precise circumstances, may amount to a war crime," said Michelle Bachelet, the U.N. high commissioner for human rights.

A hangar used to detain migrants took a direct hit in the nighttime strikes along with a workshop operated by an armed group.