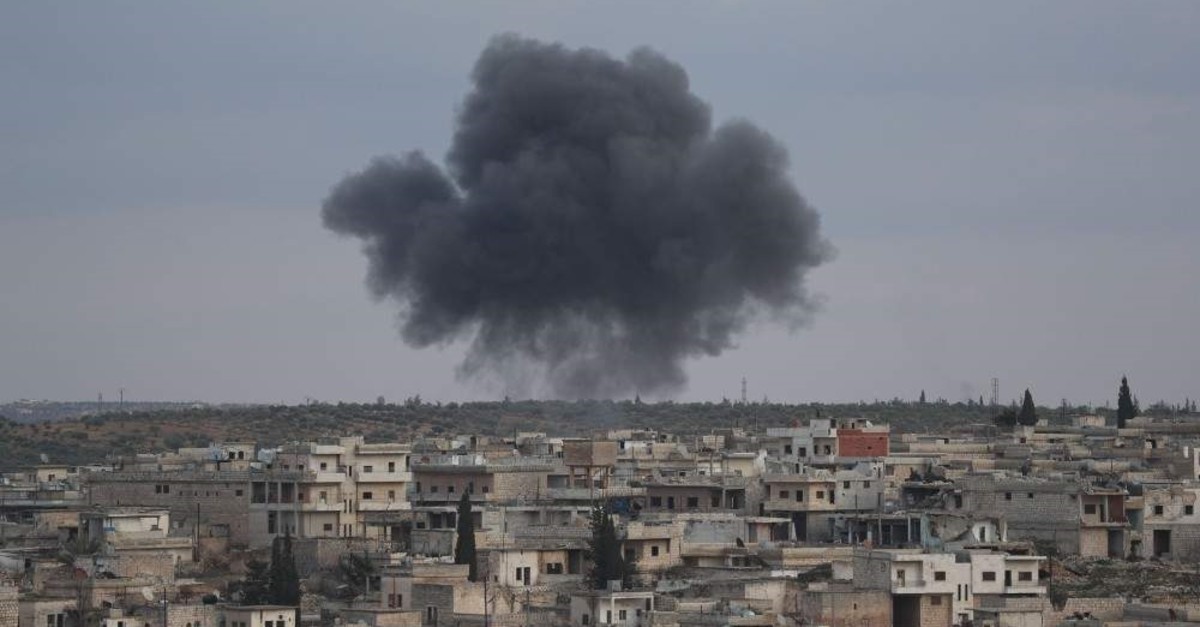 Smoke billows following reported bombardment by Syrian regime forces on the town of Kafr Ruma on the outskirts of Maaret al-Numan, in the northwestern Syrian province of Idlib, Jan. 27, 2020. (Photo by Omar HAJ KADOUR / AFP)
by Daily Sabah Jan 28, 2020 11:59 am

Releasing a statement, the ministry said regime forces have been continuing to target civilians and residential places in Idlib, forcing locals to flee under harsh winter conditions and causing a humanitarian catastrophe.

In response to the advance of regime forces to capture Idlib province, the last strong opposition bastion, the ministry warned that Turkey will respond harshly against any regime attempt that may threaten the safety of Turkish observation points in the region.
Speaking Tuesday during a joint press conference with Senegalese President Macky Sall, President Recep Tayyip Erdoğan also said Turkey is closely monitoring the situation in Idlib with the hope of coming up with sustainable peace in the end.

Idlib, the last opposition enclave in Syria, had a prewar population of 1.5 million. The number swelled to around 3 million with new refugee waves after it was designated a "de-escalation zone" under the Astana agreement between Turkey, Russia and Iran in May 2017 meant to pave a way for a permanent political solution in Syria. The Turkish military set up 12 observation posts in Idlib's de-escalation zone after the ninth round of Astana-hosted peace talks.

Assad's regime has repeatedly vowed to reassert control over the whole of Syria, despite several cease-fire agreements. Since April, more than 1,300 civilians have been killed in attacks by the regime and Russian forces in the de-escalation zone.

The Syrian regime forces on Tuesday entered Maaret al-Numan, a city of symbolic and strategic importance located in the last opposition bastion.

Maaret al-Numan is a strategic prize lying on the M5 highway linking Damascus to Syria's second-largest city Aleppo, a main artery coveted by the regime.

It is also the second-largest city in the beleaguered northwestern province of Idlib, the last stronghold of opposition forces and home to 3 million people – half of them displaced by violence in other areas.

The U.S. on Monday condemned “ruthless actions” by various parties that are hampering efforts to bring peace to northern Syria.

“Ruthless actions by Russia, the Iranian regime, Hezbollah and the Assad regime are directly preventing the establishment of a cease-fire in northern Syria,” Secretary of State Mike Pompeo wrote on Twitter.

“We condemn these barbaric attacks and call for an immediate cease-fire,” Pompeo added.

A renewed drive by Bashar Assad to recapture opposition-held Idlib province in Syria's northwest sparked a fresh exodus of many thousands of civilians toward Turkey's border on Monday amid heavy airstrikes, aid workers and witnesses said.

Approximately 541,000 civilians have been displaced from the settlements of Idlib's southern, southeastern, and Aleppo's western and southern rural areas since Nov. 2019.

It was reported that 39,000 more civilians have fled to safer areas near the Turkish border in the past 24 hours due to the regime attacks.

Most of the displaced civilians have moved toward refugee camps near the Turkish border. Some of the displaced have taken shelter in regions liberated by terrorist elements via Turkey’s cross-border anti-terror operations.

Due to overcrowding and lack of essential infrastructure in refugee camps, displaced civilians have great difficulty in finding places to take shelter. Thousands of families are in dire need of humanitarian aid as they struggle to live under harsh winter conditions.

Senior U.N. officials said this month that the humanitarian situation had become more acute with at least 300,000 civilians now on the run in Idlib province, adding to the more than half a million people who fled earlier from bouts of fighting to the safety of camps near the Turkish border.

Since Dec. 1, some 358,000 Syrians have been displaced from their homes in Idlib, the vast majority of them women and children, according to the U.N.

More than 1 million Syrians have moved near the Turkish border due to intense attacks over the last year. Since the eruption of the bloody civil war in Syria in 2011, Turkey has taken in some 3.7 million Syrians who fled their country, making it the world's top refugee-hosting country.
Turkey continues diplomatic efforts

Amid an ongoing offensive by the Syrian regime to capture the opposition-held Idlib province, Turkey continues its diplomatic efforts to stop violence in northern Syria.

"The two leaders discussed the need to eliminate foreign interference and maintain the ceasefire in Libya. The leaders agreed that the violence being carried out in Idlib, Syria must stop," White House spokesman Judd Deere said in a tweet.

Foreign Minister Mevlüt Çavuşoğlu also spoke with his Russian counterpart over the phone on Monday, according to diplomatic sources.

Çavuşoğlu and Sergey Lavrov discussed the Syria issue, particularly the crisis in Idlib, said the sources, who asked not to be named due to restrictions on speaking to the media. The two top diplomats also talked about other regional issues.