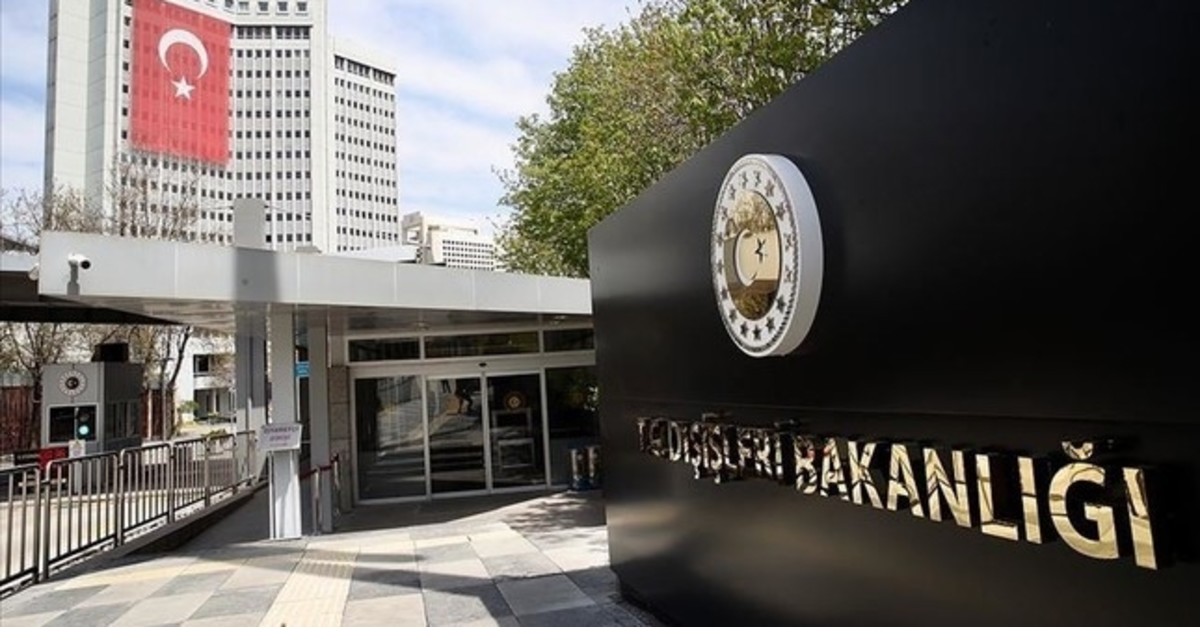 “It is no secret that France has supported warlord Khalifa Haftar since 2011 to have the upper hand over the natural resources of Libya,” the Ministry of Foreign Affairs said late Wednesday in response to French President Emmanuel Macron’s remarks claiming that Turkey is breaching an agreement to halt foreign interference in the conflict-ravaged north African country.

“The French president tried to set his own agenda with his false claims,” the ministry said in the statement.

“The main responsibility lies with France in the crisis in Libya, which has been continuing since 2011,” the statement added.

“France is one of the countries militarily supporting Haftar, which fights against the legitimate government, the Government of National Accord (GNA) in Libya. His attacks are the main threat to Libya’s territorial integrity and sovereignty,” the ministry said.

“France should first end its support to Haftar if it wants to contribute to the peace process in Libya,” the statement read, adding, “France, whose dark past in Africa is well known, should undertake a contributing role instead of accusing Turkey.”

The statement followed Macron's remarks earlier in the day during a joint news conference with Greek Prime Minister Kyriakos Mitsotakis.

Macron's comments came a week after the United Arab Emirates, Egypt and Russia – which all back Haftar forces – and Turkey – which backs the legitimate government in Tripoli – agreed with Western powers in Berlin to push for a lasting cease-fire and uphold an arms embargo.

However, since then there has been an uptick in fighting with Haftar's forces attempting to open a new front by moving forces toward the city of Misrata in the west of the country.

On Jan. 12, the conflict parties announced a cease-fire in response to a joint call by the Turkish and Russian leaders. But the talks for a permanent cease-fire deal ended without an agreement after Haftar left Moscow without signing the deal. Similarly, an attempt of the international community to find a solution to the Libyan crisis in the German capital Berlin on Jan. 19 remained inconclusive, despite Haftar accepting the terms in Berlin to designate members to a U.N.-proposed military commission with five members from each side to monitor the implementation of the cease-fire.

Since then, attacks by Haftar’s forces have continued without regard to civilians.

The conflict deepened in April last year when Haftar, who controls much of the south and east of Libya, launched an assault to seize capital Tripoli. Since the ousting of late ruler Moammar Gadhafi in 2011, two seats of power have emerged in Libya: one in eastern Libya supported mainly by Egypt and the United Arab Emirates, and the other in Tripoli, which enjoys U.N. and international recognition. The U.N.-recognized Government of National Accord (GNA) led by Fayez al-Sarraj has been under attack since April by Haftar's forces, with fighting killing over 280 civilians and 2,000 fighters.

Ties between Paris and Ankara have become increasingly strained over multiple issues including disagreements over Syria and the Eastern Mediterranean.

The Foreign Ministry, in its statement, also touched upon the fact that Macron previously hosted terrorists at Elysee Palace, namely representatives of PKK terror group’s Syrian wing, the YPG.

Turkey and Libya also signed a maritime deal two months ago after a meeting between President Recep Tayyip Erdoğan and GNA Prime Minister Fayez al-Sarraj, in Istanbul. The deal enabled Turkey to secure its rights in the Mediterranean while preventing any fait accompli by other regional states.

However, Greece, one of the main regional actors, did not welcome the deal and regarded it as a violation of its rights, though international law says otherwise.