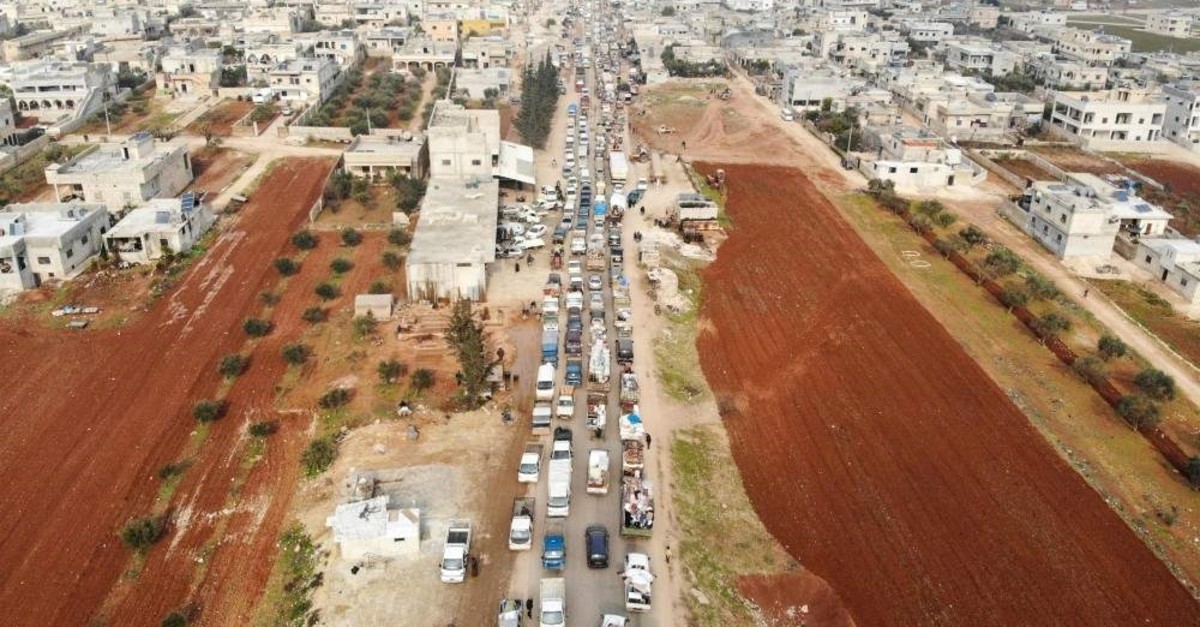 An aerial photo shows displaced Syrians driving through the northern countryside of Idlib, after fleeing its southern countryside toward areas further north near the border with Turkey, as a result of an ongoing offensive by regime forces, Jan. 28, 2020. (AFP Photo)
by Compiled from Wire Services Jan 29, 2020 2:11 pm
Forces loyal to Bashar Assad's regime, backed by Russian forces, on Wednesday seized Maarat al-Numan, a semi-deserted town of symbolic and strategic importance in Syria's last major opposition-held bastion, located in the southern part of Idlib province.
Regime forces ignored diplomatic agreements reached in Astana and Sochi as part of the Syrian peace process capturing Idlib's largest district after prolonged clashes with opposition and anti-regime armed groups.
Regime forces consisting of the Assad regime's troops bolstered by those of Iranian-backed terrorist groups continue to advance from the south and southeast in a bid to recapture opposition-held territory in the country's northwest.
Since last week, regime forces have seized 25 settlements in the southeast of Idlib with Russian air support, surrounding Maarat al-Numan.
Heavy clashes broke out between opposition and regime forces in Maarat al-Numan after the troops entered the town south of Idlib city, the Syrian Observatory for Human Rights said, after earlier reporting that the troops backed by Russian airstrikes had taken full control of the area. As sources on the ground reported, Maaret al-Numan has almost become a ghost town.
The Syrian regime’s news agency SANA earlier said the regime army had "liberated most of the town's districts,” shortly after Damascus loyalists entered the town for the first time in eight years.
Maarat al-Numan, the second largest town in Idlib province, lies on the M5 highway linking capital Damascus to Syria's second city Aleppo, the main artery coveted by the regime as it tries to rekindle a moribund economy.
Maaret al-Numan, which has been under opposition control since 2012, has been nearly deserted after months of bombardment. Its recapture would bring the regime a step closer to taking full control of the wider opposition-run bastion and the M5 highway that runs through it.
In August, Syrian regime forces captured another town along the highway, Khan Sheikhoun. Now that regime forces are in control of Maaret al-Numan, their next target is likely to be Saraqeb, which would become the last major town on the M5 highway that remains outside the regime control.
Maaret al-Numan was one of the first in that region to rise up against the dictatorship of Bashar Assad in 2011. Dubbed "the town of the revolution," it became a hub for demonstrations in the southern part of Idlib, attracting followers from surrounding villages. Opposition groups overran the town in October 2012, attracting deadly regime airstrikes on the town but without extinguishing the fervor for revolution.
The latest push to retake Maarat al-Numan coincides with battles between regime forces and opposition groups in the west of Aleppo province, an opposition-held area that in mid-January became the latest front of fighting in northwest Syria. The battles there are the most intense since regime forces forced opposition groups out of large swaths of the province in 2016.
Regime forces, which currently control around 70% of Syria, have repeatedly vowed to recapture the entire country, including Idlib and its environs. Syria's war has killed more than 380,000 people and displaced more than half the country's population since starting in 2011 with the brutal repression of anti-regime protests.
In September 2018, Turkey and Russia agreed to turn Idlib into a de-escalation zone in which acts of aggression are expressly prohibited. But more than 1,300 civilians have been killed in attacks by the regime and Russian forces in the zone since then as the cease-fire continues to be violated. In a fresh move, Turkey and Russia announced on Jan. 10 that a new cease-fire in Idlib would start just after midnight on Jan. 12. However, the regime and Iranian-backed terrorist groups have continued their ground attacks. The renewed assault came despite the Jan. 12 cease-fire deal between Turkey and Russia, which back opposing sides of the conflict. The escalation has also sparked concern from Turkey which operates 12 observation posts in Idlib under a September 2018 deal with Russia that aimed to prevent an onslaught in the province.
Turkey warned Tuesday it would retaliate "in self-defense" if any of its army posts were threatened while accusing the regime of "massacring innocent civilians and causing a humanitarian tragedy." The Observatory says regime troops have encircled a Turkish observation post south of Maarat al-Numan as part of their push toward the town. It is the third such post encircled by regime forces in the region.
Assad's campaign to recapture Idlib province, the last opposition bastion in a nearly nine-year-long civil war, has also sparked a new exodus of thousands of civilians toward the border with Turkey, which backs some opposition groups fighting Assad. The violence has displaced around 358,000 people in Syria's northwest since December, the United Nations says. People were fleeing towns in southern Idlib, as some headed toward camps for internally displaced persons or opposition-held towns near the Turkish border. Most were fleeing the town of Saraqib and the Jabal al-Zawiya region, both located north of Maaret al-Numan.
Russia has bombed areas around the main exit routes, despite the heavy outflow of civilians, according to the Observatory. More than 1 million Syrians have moved near the Turkish border due to intense attacks over the last year.
Misty Buswell of the International Rescue Committee warned that the latest escalation would "only add to the humanitarian catastrophe that is already unfolding."
The Idlib region is home to 3 million people, half of whom have already been displaced from other parts of the country. Since the eruption of the bloody civil war in Syria in 2011, Turkey has taken in some 3.7 million Syrians who fled their country, making it the world's top refugee-hosting country.
RELATED TOPICS