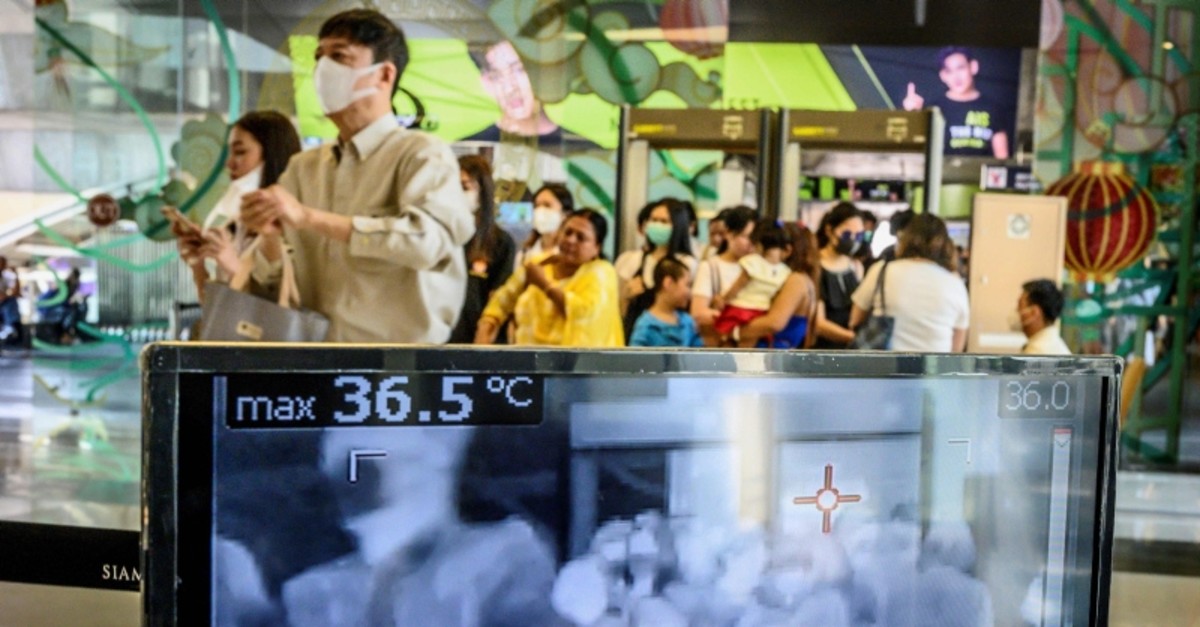 People with protective face masks pass in front of a thermal scanner as they enter a shopping mall in Bangkok on January 29, 2020 (AFP Photo)
by Daily Sabah with Wires Jan 29, 2020 10:43 am

As the Foreign Ministry initiated evacuations for 32 Turkish citizens living in Wuhan, Health Minister Fahrettin Koca announced that additional precautions have been taken to prevent the deadly virus from entering the country

Speaking to Turkish broadcaster NTV, Önen said all preparations were complete and that the evacuation would only include citizens in Wuhan, adding that no infected Turkish patients were reported so far.

"I want to clarify that there are no problems with the health of our citizens or with bringing back them to Turkey. No virus has been detected (among the evacuees). They will be brought back with ambulance airplanes or properly equipped aircraft," Önen said.

The ambassador also said that the evacuated citizens would be placed in temporary quarantine upon arrival as a precaution.

Following the ambassador's announcement, the Foreign Ministry issued a statement saying that both countries were working together to carry out the evacuation and to ensure the safety of remaining Turkish citizens in other Chinese cities.

The ministry also issued a travel advisory for China, urging citizens not to travel to China "unless it is necessary, and if they travel there, they should stay away from the regions with the virus, especially the Hubei province."

Other countries have also started evacuating their citizens Wednesday from Wuhan, the epicenter of the coronavirus outbreak that has killed 132 people and infected more than 6,000 on the mainland and abroad.

A Japanese flight carrying evacuees home included four people with coughs and fevers. The three men and one woman were taken to a Tokyo hospital on separate ambulances for treatment and further medical checks.

A plane carrying Americans who had been in Wuhan left for Anchorage, Alaska, where they will be rescreened for the virus. After departing Alaska, the plane is to fly to Ontario, California. U.S. hospitals are prepared to treat or quarantine people who may be infected.

Australia and New Zealand were the latest countries planning evacuations. Both countries also stepped up their travel advisories to China, as did Britain.

According to Health Minister Fahrettin Koca, the decision for evacuation came after the citizens contacted the Foreign Ministry and requested assistance to leave the city, which was placed under lockdown by Chinese authorities.

"We don't want any of our citizens abroad to risk infection. We are in close contact with the World Health Organization (WHO). We also took all the necessary steps for permissions. With Chinese authorities' approval, we hope to bring our citizens home within the next 24 hours," he said.

Koca said Turkey was also increasing precautions as more and more countries confirmed patients infected with the virus. Koca said a special crisis center was established to respond to any potential outbreak.

The minster also said the number of thermal cameras at Istanbul Airport were increased to effectively screen passengers arriving from China, adding that the cameras have not detected anyone with the virus so far.

With airliners being the primary means for the virus to spread around the globe, several airlines have begun disinfecting their aircraft upon arrival, while others stopped flights to mainland China altogether.

British Airways said Wednesday it was halting all flights to China, joining several Asian carriers that were either suspending or significantly cutting back service. Air India and South Korean budget carrier Seoul Air also halted all flights to the country, and Indonesia’s Lion Air planned to do the same. Other carriers including Finnair, Hong Kong-based Cathay Pacific and Singapore-based Jetstar Asia said they would reduce the number of flights.