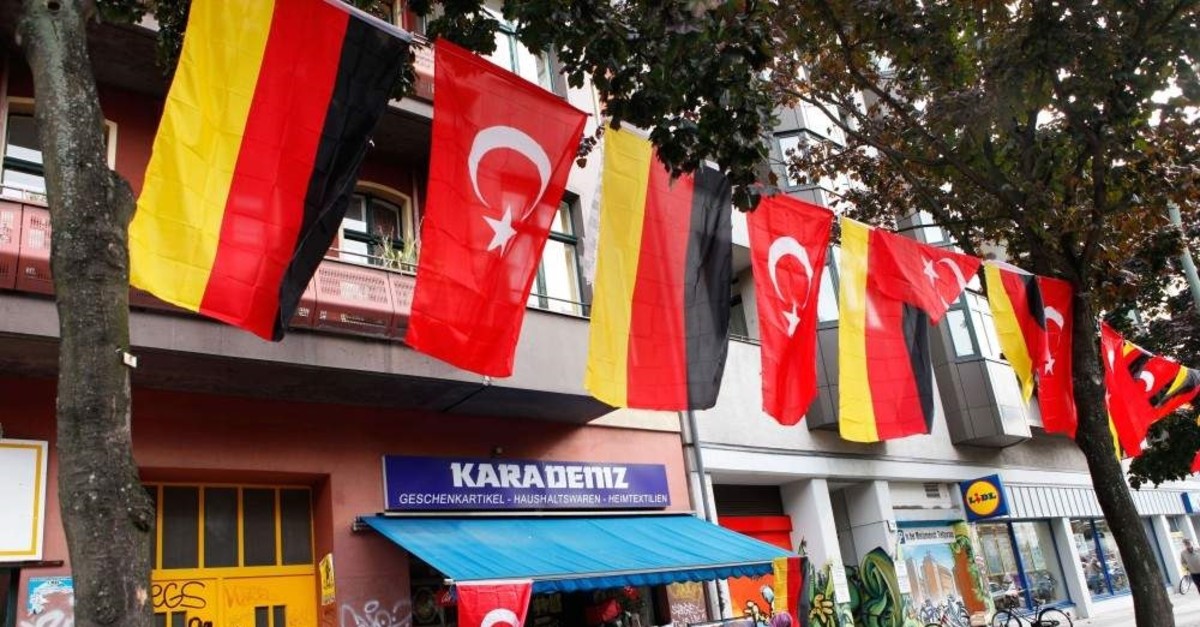 A shopkeeper in Kreuzberg, a district with a large Turkish population, has hung up German and Turkish flags outside his shop in Berlin, Oct. 7, 2010. (AFP PHOTO)
by Daily Sabah with AA Jan 30, 2020 4:14 pm

Turkey is getting ready to open three Turkish schools in Germany with initiatives taken as part of the cooperation on education between the two countries.

"There are three German schools in Turkey. Now we have taken steps to open three Turkish schools in Germany's Berlin, Frankfurt and Cologne provinces," said the country's ambassador to Berlin, Ali Kemal Aydın.

Speaking to journalists, Aydın said that so far, there have been five meetings with German authorities on the issue.

"There is a deal (between the two sides) over the letter of agreement for the most part. We hope for the final agreement to be concluded in the upcoming months," Aydın said.

Expressing that Turkey is in favor of having diplomatic ties with Germany based on constructive rhetoric, Aydın reiterated the country's expectations when it comes to the fight against terrorism.

According to Aydın, although Turkey appreciates the steps Germany has taken against the PKK, these improvements are not enough to tackle the terrorist group since its fundraising, blackmailing and propaganda activities continue.

The PKK has been banned in Germany since 1993, but it remains active, with nearly 14,500 followers among the country's Kurdish immigrant population. Berlin banned the usage of PKK placards, flags and Öcalan's pictures with a decree in 2017.

However, still, Ankara has long criticized Germany for not taking serious measures against the PKK and its affiliates in Germany, which use the country as a platform for fundraising, recruitment and spreading propaganda.

PKK followers committed 1,873 criminal offenses in Germany in 2018, according to annual statistics announced by the German Interior Ministry, an increase of more than 80% over the previous year, while violent offenses rose from 152 to 305.

"Germany does not recognize FETÖ as a terrorist group. FETÖ sees Germany as a safe haven. So far, we have requested the extradition of 60 (FETÖ fugitives) but there have not been any positive developments on the issue yet," Aydın emphasized.

Aydın also stated that if FETÖ is removed from the House of One project, a project that aims to unite all religions under one roof, Turkey is ready to take part in it and informed German authorities on the subject as well.

A project that has been launched jointly by the state of Berlin and the German government, House of One plans to make a building where Christians, Jews and Muslims can all pray together. The structure will be a combination of a church, synagogue and mosque. The project has a budget of 20 million euros and is expected to be completed by 2024. However, many Muslims in Germany do not welcome the project since a FETÖ-linked group named "Forum Dialogue," rather than a legitimate Muslim group, is representing the Muslim community.

FETÖ is classified as a terrorist organization by Turkey and its failed coup attempt in 2016 left 251 people martyred and nearly 2,200 injured.

The German government's tolerance toward the group and its reluctance to extradite key FETÖ suspects to Turkey including ex-generals, bureaucrats or prosecutors involved in plots against the democratically elected government has been a major source of tension between Berlin and Ankara in recent years.

Since the 1990s, Gülenists have managed to build a large network in Germany, and the group claims to have around 70,000 followers in the country.

Regarding the Turkish diaspora in Germany, Aydın said that Turkey is working closely to protect the community's rights, especially against the threat of rising far-right ideologies and xenophobia. The ambassador expressed that there have been 86 attacks on Turks and Turkish mosques in Germany in 2019.

Germany, a country of over 82 million people, has the second-largest Muslim population in Western Europe after France. Among the country's nearly 4.7 million Muslims, 3 million are of Turkish origin. Germans of Turkish origin have been part of the German society for nearly three decades. In 1961, Turkey and Germany signed a recruitment agreement, which allowed Turkish citizens to work in Germany as guest workers.

Hate speech, swastika graffiti, physical assault and arson are among these crimes. One of the reasons why the west is more tolerant toward foreigners and especially Turkish people could be because German society had a broader experience with Turks and foreigners after the Turkish guest workers of the 1960s. Furthermore, the fact that the west is more developed in terms of economy, thus attracting more foreigners, is another reason.

Pointing to the current state of Turkish-German ties, Aydın said that the two countries had a quick start to 2020 in terms of diplomatic meetings. He cited President of Recep Tayyip Erdoğan's visit to Berlin to attend a conference on Libya, which was followed by German Chancellor Angela Merkel's one-day trip to Turkey last week. The ambassador also heralded that many Turkish ministers are expected to have meetings in Germany during the year.