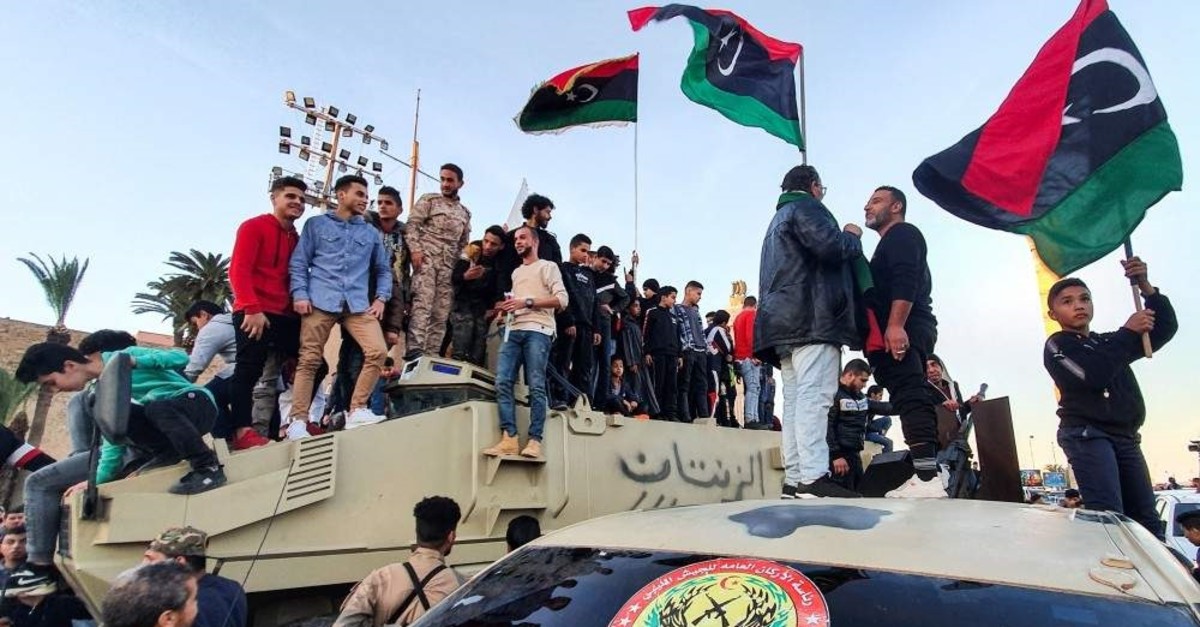 People stand with Libyan national flags above armoured military vehicles of forces loyal to the UN-recognised Tripoli-based ,Government of National Accord, (GNA) during a celebration in the capital's Martyrs' Square, Jan. 31, 2020. (AFP)
by Daily Sabah Feb 02, 2020 5:56 pm

Libya's putschist Gen. Khalifa Haftar, who has been dragging the North African country from conflict to conflict, announced Saturday that he will attend the commission talks in Geneva, despite refusing earlier calls to reconcile.

According to U.N. Support Mission in Libya's official Twitter account, Haftar "confirmed LNA's (Libyan National Army) participation in the Joint Military Commission (5+5) talks," during a meeting with the U.N. officials.

A military commission that will discuss the cease-fire between Libya's warring parties, as laid out during the Berlin conference, is expected to convene this week in Geneva.

Haftar's forces have intensified their attacks on Tripoli and U.N.-recognized Government of National Accord (GNA)-controlled areas ahead of this meeting, violating the cease-fire.

On Jan. 12, the conflict parties announced a cease-fire in response to a joint call by the Turkish and Russian leaders. However, the talks for a permanent cease-fire deal ended without an agreement after Haftar left Moscow without signing the deal.

Similarly, an attempt of the international community to find a solution to the Libyan crisis in the German capital Berlin on Jan.19 remained inconclusive. Since then, attacks by Haftar's forces have continued with no regard for civilian lives.

The conflict deepened in April last year when Haftar, who controls much of the south and east of Libya, launched an assault to seize Tripoli. Since the ousting of late ruler Moammar Gadhafi in 2011, two seats of power have emerged in Libya: one in eastern Libya supported mainly by Egypt and the United Arab Emirates (UAE) and the other in Tripoli, which enjoys U.N. and international recognition.

The GNA led by Fayez al-Sarraj has been under attack since April by Haftar's forces, with fighting killing over 280 civilians and 2,000 fighters.

Meanwhile, Morocco declared Sunday that it recognizes the GNA as the only legitimate power in Libya, following a phone call between the two countries' foreign ministers.

Releasing a statement following the talk, Libya's foreign ministry said Morocco has shown full support for the GNA as the only legitimate power in the country.