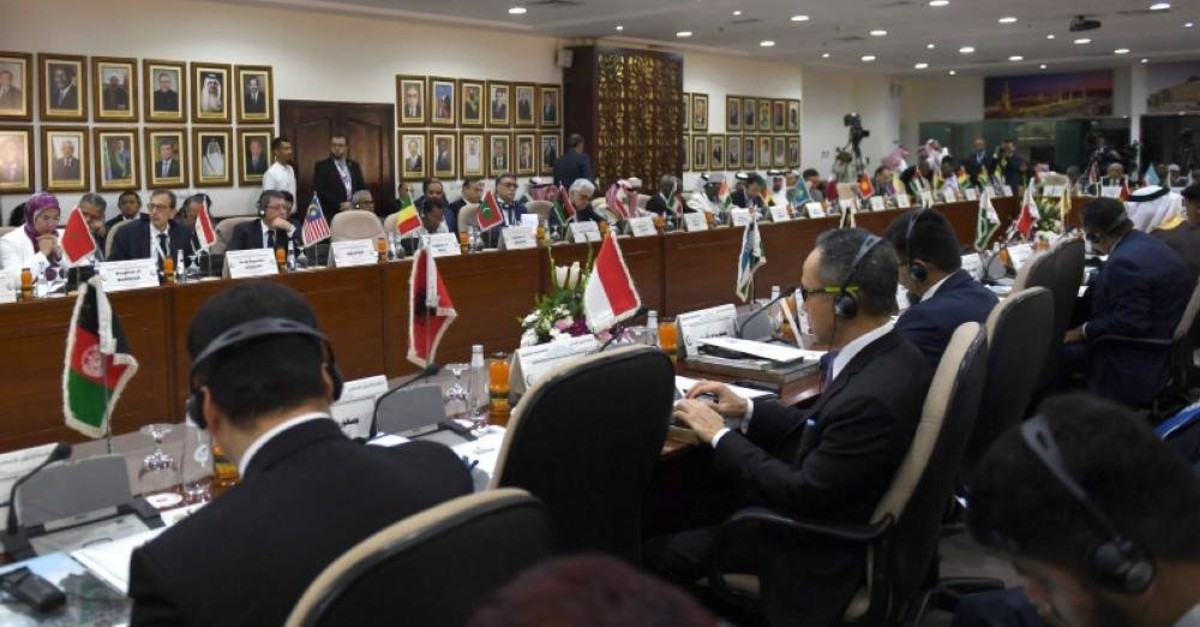 A picture taken on Feb. 3, 2020 shows a general view of the emergency ministerial meeting of the Organisation of Islamic Cooperation (OIC) in the Saudi port city of Jeddah to address U.S. President Donald Trump's Middle East plan. (AFP Photo)
by Daily Sabah Feb 03, 2020 1:45 pm
Members of the Organisation for Islamic Cooperation (OIC) who gathered in Saudi Arabia’s capital for the discussion of the U.S. so-called "Deal of the Century" Monday morning, reaffirmed that they reject the plan and announced the organization’s position on the issue. The OIC called on all member states not to engage with the plan or cooperate with the U.S. administration to implement it.
In his opening remarks, OIC Secretary-General Yousef bin Ahmed Al-Othaimeen said any solution to the Palestine issue "must be based on the establishment of a sovereign and geographically integrated Palestinian state, with east Jerusalem as its capital."
"We renew our commitment to continuously engage in efforts aimed at achieving peace, security, stability and justice in accordance with international resolutions and the Arab peace initiative,” he added, underlining the OIC’s support for "the Palestinian Authority and people's choices."
Foreign Minister Mevlüt Çavuşoğlu slammed the United States' so-called Middle East peace plan as an effort to "justify Israeli occupation and annexation of Jerusalem and the West Bank."
"The OIC reaffirms its principled position and support for Palestine in the struggle to regain its legitimate rights, including the establishment of an independent and sovereign state with east Jerusalem as its capital," a statement of the OIC said Sunday, adding that the solution for the Palestine issue must be in accordance with international law, relevant U.N. resolutions and the Arab peace initiative.
U.S. President Donald Trump last Tuesday unveiled the long-awaited peace plan for the Israeli-Palestinian conflict, although it had already been soundly rejected by Palestinians. Israeli Prime Minister Benjamin Netanyahu joined Trump at the White House for the announcement, with no Palestinian officials present. In a news conference, Trump said that Jerusalem would remain Israel's "undivided capital." By accepting the situation on the ground, the U.S. administration gave Israel what it wanted, as the plan for the Middle East does not contain a fully independent Palestine but a stronger Israel and Gulf against Iran and other threatening elements for the U.S.
The plan deprives Palestinians of nearly everything they had been fighting for: east Jerusalem as their national capital, the removal of Jewish settlements in the occupied West Bank, territorial control over their own borders and the security that a sovereign state would normally enjoy. Trump said east Jerusalem would be the capital of Palestine, while Jerusalem would serve as Israel's undivided capital, noting that Al-Aqsa Mosque would be open to Muslims and that Israel would be responsible for ensuring freedom of religion.
Last Update: Feb 03, 2020 3:57 pm
RELATED TOPICS