Only 800 meters between Turkish, regime forces amid escalating tension in Idlib 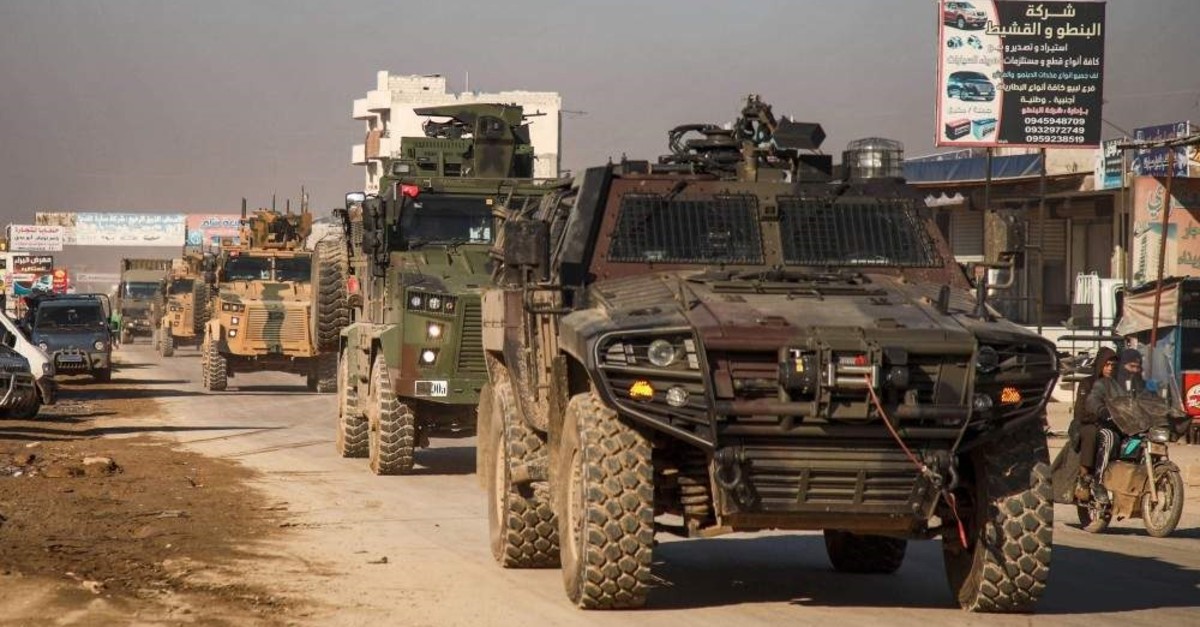 A Turkish military convoy of tanks and armoured vehicles passes through the Syrian town of Dana, east of the Turkish-Syrian border in the northwestern Syrian Idlib province, on February 2, 2020. (AFP Photo)
by Uğur Yıldırım Feb 04, 2020 4:43 pm

Amid escalating tensions following the Bashar Assad regime’s attack on Turkish soldiers in northwestern Syria’s Idlib province, the distance between regime forces and Turkish Armed Forces (TSK) has been reduced to just 800 meters.

In response to regime attacks, the Turkish military targeted regime forces throughout the day on Monday. TSK also established temporary military bases and observation points in four different locations in Saraqib, which is the crossing point across the M4 and M5 highways.

Throughout the night, TSK continued deploying additional military forces to the region. Most recently, a military convoy of 10 vehicles crossed the border and reached northwestern Syria. While the regime forces were surrounding Saraqib and getting closer to Idlib city, TSK increased its security on the M4 and M5 highways. Turkish artillery has been attacking regime targets, and Turkish tanks have been patrolling the area to prevent any possible threat.

Due to the regime attacks, three observation points in the region – points five, eight, and nine – are currently under siege by the regime forces. The Maar Hitat temporary observation point on the M5 highway in Maarat al-Numan is also under regime siege.

The regime and its backers’ attacks targeting residential places and civilians have forced more than 151,000 people to flee toward relatively safer areas near the Turkish border over the last week. The number of displaced civilians due to the regime attacks reached 692,000 since November 2019. Continuing its advance to capture the last strong opposition bastion, regime forces are currently 8 kilometers away from Idlib city. If regime forces’ start attacking Idlib city, it is expected that nearly half a million people will migrate, causing a humanitarian catastrophe that has never been witnessed during the civil war.

Regime forces pushed north from Maarat al-Numan on Thursday toward the town of Saraqib, whose residents have mostly fled in the face of heavy bombardment.

Both Maarat al-Numan and Saraqib lie on the key M5 highway connecting the capital Damascus to the second city Aleppo. The regime has been eyeing the road as it seeks to revive a moribund economy ravaged by almost nine years of war.