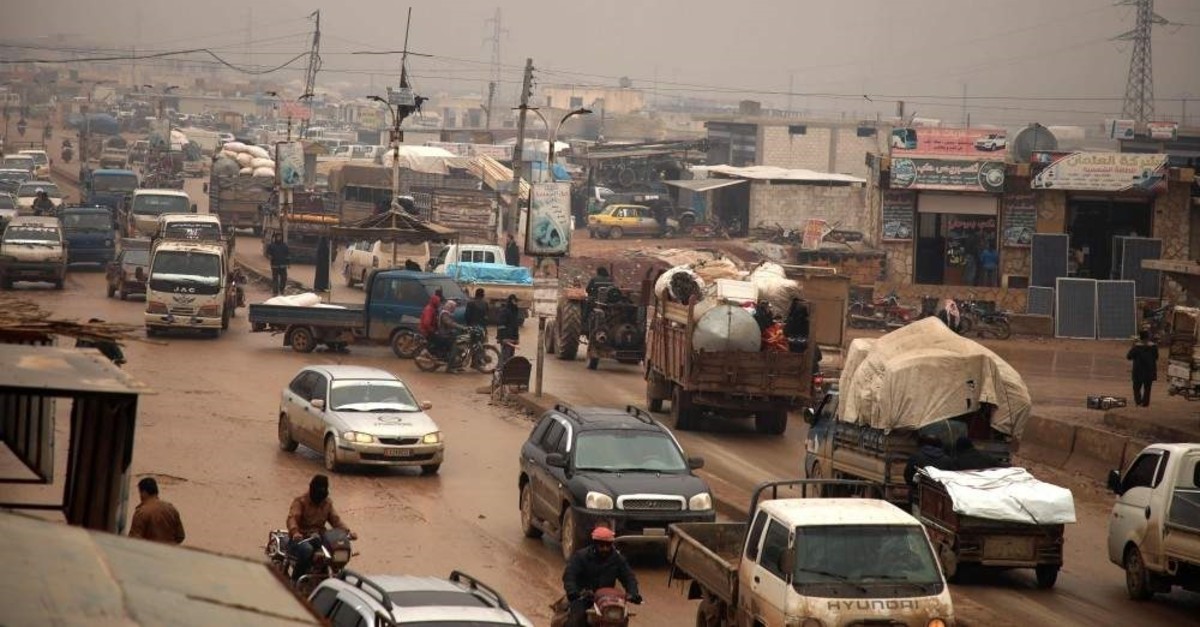 The risk of a new humanitarian crisis is on the horizon as Syrian regime forces continue their offensive in northwestern Syria to capture the last strong opposition bastion in Idlib province, despite Turkey's warnings and heightened tensions. Hundreds of thousands more civilians are expected to mobilize toward the Turkish border within a week, causing severe chaos in the region if the regime's offensive turns toward Idlib city.

Russian-backed Syrian regime forces on Wednesday pressed on with their offensive in Idlib, where they seized more than 20 towns and villages from opposition groups over the past 24 hours, according to the Britain-based Syrian Observatory for Human Rights.

With their latest advance, Damascus loyalists have nearly encircled Saraqeb in southern Idlib and were within one kilometer of a strategic highway town where residents left following weeks of bombardment.

Both captured Maarat al-Numan and encircled Saraqib lie on the key M5 highway connecting the capital Damascus to the second city Aleppo. The regime has been eyeing the road as it seeks to revive a moribund economy ravaged by almost nine years of war.

Due to the intense bombardment by regime forces in the region as they are getting closer to the Idlib city, where more than half a million people live, civilians living there started to flee their homes by moving toward the relatively safer areas near the Turkish border.

If the regime keeps advancing through Idlib, it is expected that hundreds of thousands more displaced civilians will mobilize toward the Turkish border, causing huge chaos and a fresh humanitarian catastrophe in the region.

Due to overcrowding and lack of infrastructure and international aid, refugees are already living under difficult conditions in camps near the Turkish border. It seems impossible for these areas to host more displaced refugees.

Intensive aerial bombardment and ground fighting in the opposition-dominated Idlib region since December have killed almost 300 civilians and triggered one of the largest waves of displacement in the nine-year war.

The United Nations and aid groups have condemned the escalation and called for an end to hostilities in the region which is home to 3 million people, half of them already displaced from other parts of Syria.

"Since 1 December, some 520,000 people have been displaced from their homes, 80% of which are women and children," said David Swanson, spokesman for the U.N.'s Office for Humanitarian Coordination (OCHA).

"This latest displacement compounds an already dire humanitarian situation on the ground," Swanson said. He said the U.N. was alarmed by the plight of more than 3 million people – half of them displaced by violence elsewhere – who live in Idlib province and surrounding areas.

President Recep Tayyip Erdoğan also said nearly 1 million people were moving towards the Turkish border and Syrian territory under Turkish control. "No one has the right to place such a weight on our shoulders," he said. Turkey, which already hosts more than 3.6 million displaced Syrians, is keen to stop another mass influx.

While Turkey continues its efforts to meet the needs of fleeing civilians by providing humanitarian aid, it also actively tries to stop regime attacks and its violence on civilians and residential places.

Following the regime shelling of Turkish positions in Idlib that killed at least seven Turkish soldiers and one military staff person, Syrian regime forces and the Turkish military have been engaging in direct clashes. In retaliation, Turkey struck more than 50 targets and killed 76 Syrian soldiers. The exchange between the two forces was their deadliest clash since Ankara sent troops to Syria in 2016.

Turkish artillery targets regime forces in order to provide the security of observation points and Turkish soldiers in the region, while also deploying additional military equipment.

The Syrian regime was poised this week to recapture Saraqeb. But its push hit a snag after regime forces exchanged deadly fire with Turkish troops on Monday, an escalation U.N. chief Antonio Guterres called "extremely worrying." Guterres, speaking at U.N. headquarters, appealed for "a cessation of hostilities."

Under a 2018 deal with Russia, Turkey set up 12 military observation posts in Idlib aimed at preventing a full assault by Syrian regime forces.

Erdogan on Tuesday told his Russian counterpart Vladimir Putin that Ankara would respond "firmly" to any new Syrian attack. Erdoğan also warned that his country would not allow Syrian regime forces to gain more ground and accused them of driving "innocent and grieving people" towards the Turkish border.