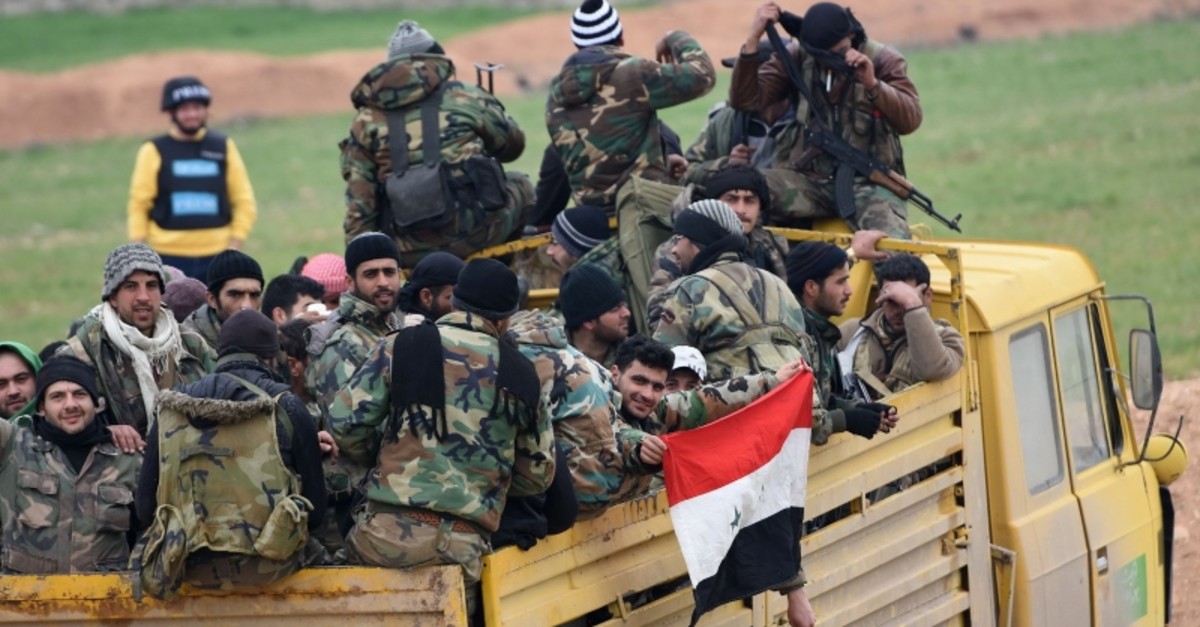 Syrian regime forces entered the strategic town of Saraqib in northwestern Idlib province, a war monitor reported Wednesday, in a renewed push by Bashar al-Assad to recapture the last opposition stronghold despite Turkey’s warnings to pull back its forces from Turkish-manned posts.

Syrian regime forces continued to pound Idlib Wednesday, as part of an offensive that has killed 300 civilians since December and displaced 520,000 people.

Regime forces penetrated Saraqib, a town in the province that they had been seeking to encircle for days, according to the Syrian Observatory for Human Rights.

The monitoring group said regime forces had "begun to comb districts of Saraqib and are at the point of taking control of all of the M5 road," while opposition groups had withdrawn to a village north of the town.

According to pro-regime state television, "units of the Syrian Arab Army have encircled the town of Saraqib on three sides" and were positioned over the nearby junction of the key M4 and M5 highways.

The town sits on a junction of the two key roads, which the regime is seeking to retake in order to revive an economy ravaged by almost nine years of war.

The M5 connects the capital Damascus to the second city Aleppo in the north, crossing Idlib, while the M4 connects Aleppo with the coastal city of Latakia.

A week ago, regime forces – backed by Russia – retook the town of Maaret al-Numan, which sits on the M5.

Syrian regime troops have seized more than 20 towns and villages from opposition groups within 48 hours, according to the Observatory.

The Observatory also reported Russian airstrikes killed three civilians – all members of the same family – on the outskirts of Idlib city Wednesday.

Regime rocket fire killed another civilian in the town of Anjara in the west of the neighboring Aleppo province, the monitor said.

Assad's campaign to regain Idlib province, the last opposition bastion in a nearly nine-year-long civil war, has sparked a new exodus of thousands of civilians toward the border with Turkey, which backs some opposition groups fighting Assad.

The mass displacement of civilians in Idlib – one of the largest since the 2011 start of the conflict that has displaced more than half of Syria's pre-war population of 20 million – has coincided with a biting winter.

Turkey, which already hosts some 3.7 million Syrian refugees, says it wants to prevent a further influx.

The renewed fighting is taking place despite a Jan. 12 cease-fire deal between Turkey and Russia, which back opposing sides of the conflict.

Throughout the night, the TSK continued deploying additional military forces to the region. A military convoy of 10 vehicles crossed the border into northwestern Syria. The TSK bolstered its security on the key M4 and M5 artery highways. Turkish artillery has been pounding regime targets, with Turkish tanks patrolling the area to prevent any possible threat.

President Recep Tayyip Erdoğan said two of Turkey's 12 observation posts in Idlib, set up under a 2018 agreement with Russia, were now "behind the regime's lines."

Monday's clashes – the bloodiest since Ankara sent troops across the border to Syria in 2016 – prompted Erdoğan to ask Moscow, the key backer of Assad's regime, to "better understand our sensitivities in Syria."

He spoke with his Russian counterpart Vladimir Putin Tuesday and warned that Ankara would respond "firmly" to any new Syrian attack.

Erdoğan said the clashes amounted to a "new era" in Syria and that any further attacks on Turkish forces would be "responded to in kind."

"The air and ground elements of the Turkish armed forces will freely move in the Idlib region and if needed will launch an operation," he added.

Erdoğan warned on Wednesday the Turkish military would drive back regime troops in Idlib unless they withdraw by the end of the month to stem an assault which he said had displaced nearly a million people.