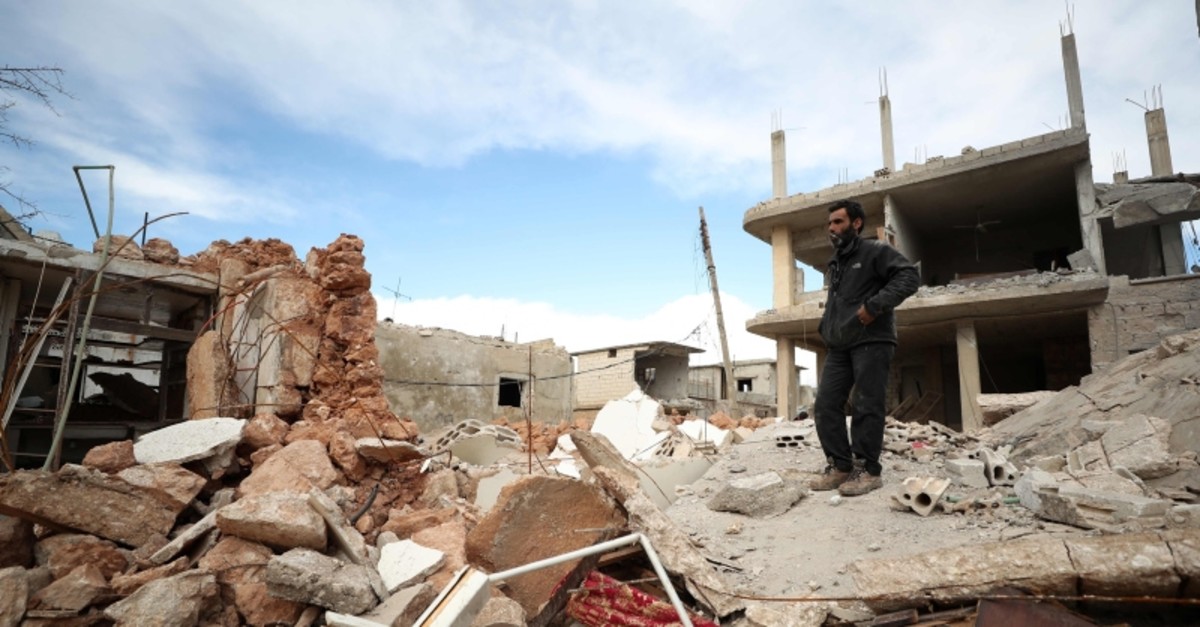 Wael, the father of four, stands amidst the rubble of a destroyed building in the town of Saraqeb, in in Syria's northwestern Idlib province on January 31, 2020. (AFP Photo)
by Daily Sabah Feb 07, 2020 1:34 am

He noted that in the last two months, hundreds of civilians have died and half a million people displaced due to indiscriminate bombing by the Russia-backed Bashar Assad regime.

Pedersen, informing the U.N. Security Council (UNSC) through video conferencing, said increased airstrikes and clashes displaced a large number of people and many civilians were killed.

"I cannot pretend that there is a magic solution for Idlib, but I believe that a solution can be found through international cooperation and serious initiative," he said.

In the Idlib region where a humanitarian crisis has already unfolded due to regime attacks on residential buildings and civilians, Syrian regime forces and the Turkish military have been engaging in direct clashes in recent days.

An offensive by the Damascus regime, backed by Russian airpower, against the last stronghold of opposition groups has drawn strong warnings from President Recep Tayyip Erdoğan.

Approximately 541,000 civilians have been displaced from the settlements in Idlib's southern, southeastern and Aleppo's western and southern rural areas since Nov. 2019.

Due to the rising displaced population, the tent camps in Idlib fail to meet the needs of war-weary Syrians because there is not enough space to set up more tents. Thousands of families are currently in dire need of humanitarian assistance.

Some displaced people arrived in tent camps along Turkey's borderline and some fled to areas liberated during the Turkish military's Operation Peace Spring and Operation Olive Branch.

Since 2016, Turkey has launched a trio of successful anti-terrorist operations across its border into northern Syria to prevent the formation of a terror corridor: Operations Euphrates Shield (2016), Olive Branch (2018) and Peace Spring (October 2019).

In September 2018, Turkey and Russia agreed to turn Idlib into a de-escalation zone in which acts of aggression are expressly prohibited. But more than 1,300 civilians have been killed in attacks by the regime and Russian forces in the de-escalation zone since then as the cease-fire continues to be violated.

Turkey announced on Jan. 10 that a new cease-fire in Idlib would start just after midnight on Jan. 12. However, the regime and Iran-backed terrorist groups continued their ground attacks.

More than 1 million Syrians have moved near the Turkish border due to intense attacks over the last year.