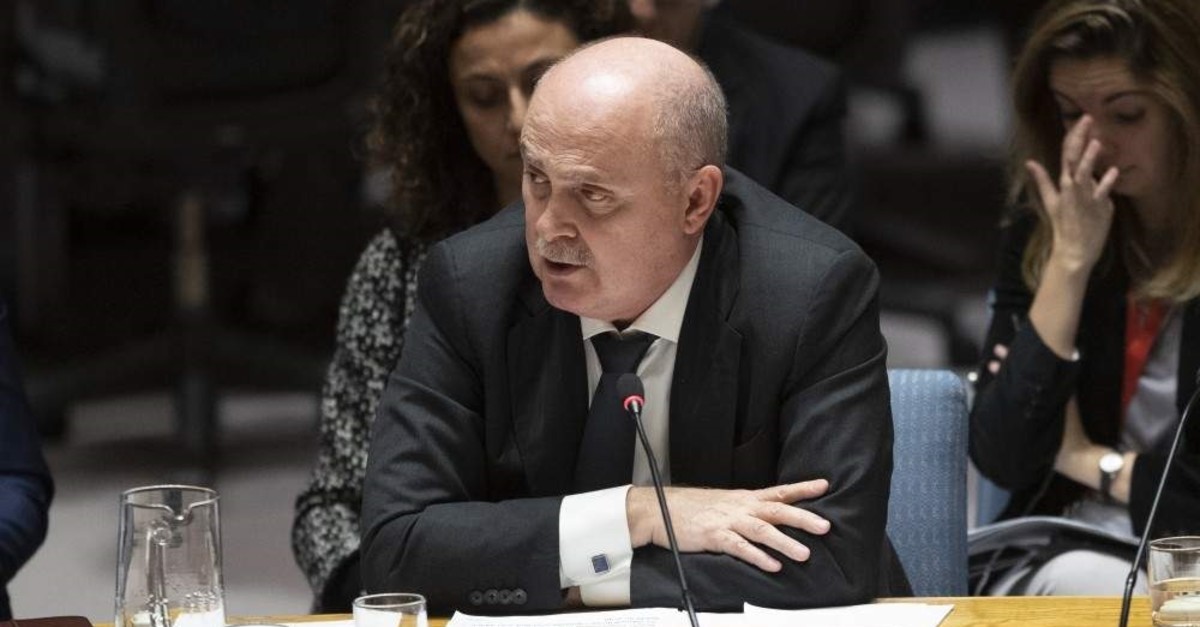 Turkish Ambassador to the United Nations Feridun Sinirlio?lu speaks during a Security Council meeting on the situation in Syria, Thursday, Oct. 24, 2019, at UN headquarters. (AP Photo)
by Anadolu Agency Feb 07, 2020 10:02 am
Turkey's U.N. Ambassador Feridun Sinirlioğlu warned Thursday of severe consequences for Syrian regime aggression in Idlib.
Addressing the U.N. Security Council in New York, Sinirlioğlu said Bashar Assad wanted to draw Turkey into "his dirty war by deliberately targeting" Turkish military forces.
"Any military aggression targeting Turkey's security and Turkish soldiers will be severely punished," said Sinirlioğlu. "We will never hesitate to use our right to self-defense. I am not drawing a red line here. This is a warning."
He asserted that Turkey believes in a political solution in the war-torn country, and it is working with the U.N. for a settlement there.
"But Turkey will never tolerate any belligerent act," he added.
On Monday, Assad regime forces attacked Turkish troops, resulting in the deaths of seven Turkish soldiers and one civilian personnel. In retaliation, the Turkish military targeted more than 50 positions and neutralized more than 70 Syrian regime troops, according to Defense Minister Hulusi Akar.
Meanwhile, Russian-backed Syrian forces advanced through Idlib province Thursday in a brutal ground offensive that was preceded by weeks of intensive aerial bombardment that emptied whole towns of terrified civilians.
Since March 2011, hundreds of thousands of Syrians have been killed by the Syrian regime and millions have been displaced, besieged and denied humanitarian and medical aid.
Turkey is hosting nearly 4 million Syrian refugees.
"This is almost one-fifth of the entire population of Syria before the start of the conflict. All this is because the tyrant in Damascus refused to meet the legitimate demands of the Syrian people," said Sinirlioğlu.
He said, "Terror groups established their own states in Syrian territory because the tyrant in Damascus would not allow Syrian people to enjoy their basic rights."
The Turkish envoy said Turkey expects the regime and its supporters to withdraw from their current positions by the end of this month.
"And we expect all our friends and all the responsible members of the international community to respect our legitimate security concerns," he added.
Last Update: Feb 07, 2020 3:14 pm
RELATED TOPICS