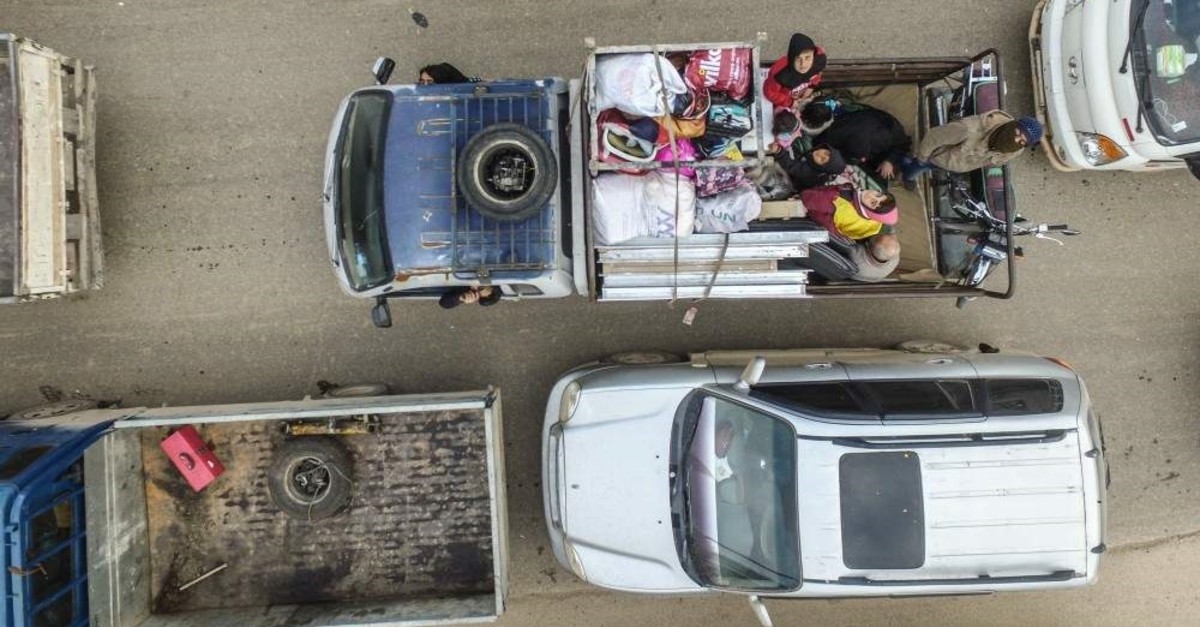 Half a million people were recently displaced in Syria's northwest as the Assad regime and Russia continued to target civilians. (AA Photo)
by Daily Sabah Feb 09, 2020 1:19 pm
The humanitarian situation in northwestern Syria, especially the provinces of Idlib and Aleppo, continues to deteriorate at an alarming rate due to ongoing violence, which has had a devastating effect on the 4 million people in northwestern Syria, the U.N. Office for the Coordination of Humanitarian Affairs (OCHA) has announced.

"This latest emergency compounds an already dire humanitarian situation for people in northwest Syria who have been made vulnerable by years of crisis, violence, economic downturn and multiple displacements. Since late November, airstrikes and shelling gradually increased across the Idlib area, including parts of northern Hama and western Aleppo," the OCHA said in a written report published Feb.6.

The areas controlled by the regime in Idlib and neighboring Aleppo have been widening recently since the Syrian regime launched a renewed offensive on the de-escalation zone, vowing to take back the last opposition stronghold. With attacks on civilians intensifying in the region, the situation for women and children in the area, especially, is looking dire. Idlib had a prewar population of 1.5 million, but with the influx of increasing numbers of refugees fleeing regime attacks, 3 million now live in the "de-escalation zone" in Idlib declared as part of the Astana agreement signed between Turkey, Russia and Iran in May 2017. Now, however, as the Assad regime is set on capturing the city, civilians are once again on the run with nowhere to go.

"People are being concentrated into a smaller area, exacerbating the humanitarian situation as well as compounding vulnerabilities. As such, the immediate absorption capacity of the camps has been surpassed while towns and villages are overburdened with new arrivals," the OCHA elaborated, adding that 79% of people need shelter and 57% food.

The current escalation in conflict in northwestern Syria began in April 2019; however, the situation deteriorated in the past two months, with the U.N. and Turkey urging countries to react. Meanwhile, the international community has maintained an inadequate response to the situation.

Furthermore, 18 people were killed recently on Thursday in Idlib and Aleppo by Russian and Syrian regime shelling, including three ambulance medical staff.

"In the last 5 days alone, 45 people were killed by the brutal bombardment by the regime and Russian warplanes," the White Helmets civil defense group announced on Friday.

Airstrikes and shelling continue to take a heavy toll on civilian lives. On Feb. 3, a van transporting a family from Kafr Nafra in western Aleppo countryside was reportedly hit by an airstrike, resulting in the death of nine civilians including three women and four children. On the same day, local sources reported that airstrikes had hit a kindergarten in Bala, resulting in the death of two children and a woman. On Jan. 29, airstrikes on Ariha city, hosting many civilians who fled from southern Idlib, reportedly killed 10 people including, four women and a child, and heavily damaged a bakery. Since Jan. 1, local sources reported that more than 180 civilians were killed due to hostilities including some 60 children and 27 women in Idleb area, including western Aleppo governorate, OCHA stated.

The report further underlined that harsh weather conditions were adding to the already tragic situation for civilians sleeping in camps or in open fields. A windstorm struck northwestern Syria on Jan. 29, "Local sources reported that the windstorm caused damage to several camps, affecting more than 470 families," the OCHA added.
RELATED TOPICS