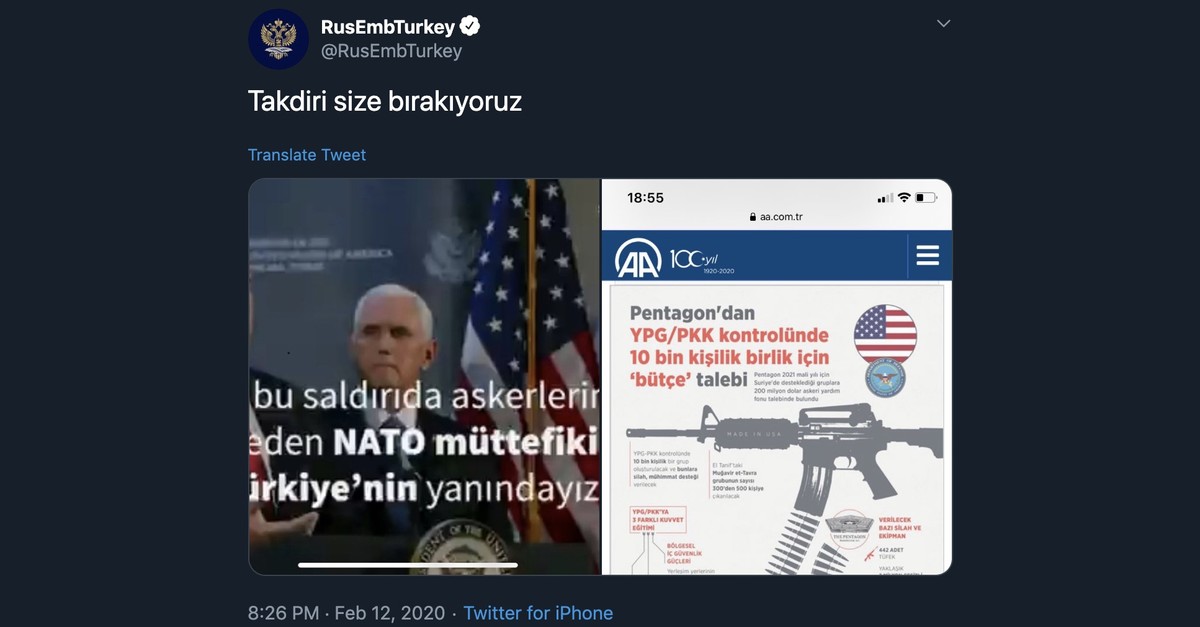 In response to Washington's support to Ankara against Syrian regime attacks targeting Turkish troops in Idlib, the Russian Embassy in Ankara tried to use U.S.-YPG relations as a manipulation tool

In a likely attempt to prevent a thaw in Turkey-U.S. ties over the crisis in Idlib, the Russian Embassy in Ankara shared on Twitter late Wednesday a set of pictures showing the U.S. past engagement with the YPG/PKK terror group in Syria.

Past records, however, would prove that Moscow is no different than Washington when it comes to their approach to terrorist groups.

The jibe came after the U.S.' recent show of support for Ankara against the Bashar Assad regime’s attack on Turkish troops in northwestern Syria’s Idlib.

"We leave you the verdict," the tweet by the Russian Embassy in Ankara said. It contained two conflicting screenshots that showed the contradiction in the U.S. stance on the terrorist YPG, the Syrian wing of the PKK.

In one of the screenshots, U.S. Secretary of State Mike Pompeo is seen with a caption saying "We support our NATO ally Turkey, whose soldiers have died after the attack" about the recent assaults by Assad regime forces that killed 13 Turkish soldiers.

In the other screenshot, there was an infographic by Anadolu Agency (AA) which documented the Pentagon's request for $200 million in support for YPG terrorists.

Nevertheless, the attempt was bound to backfire given Russia does not even recognize the PKK as a terrorist group which is recognized as such, at least on paper, by the U.S., the European Union and many other countries.

The tweet was ridiculed by Turkish netizens, with many criticizing Russia for the same hypocrisy as the U.S.

Some were quick to point out that the YPG even opened an office in Moscow in 2016, drawing heavy criticism from Turkish officials.

Most recently, the Assad regime and YPG/PKK terrorists sat at the negotiating table in a Russian base located in the Syrian port city of Latakia. It was reported that Russia convinced the regime and the YPG/PKK to discuss issues regarding the Hmeymim Airbase.

Turkey views the YPG as a terrorist organization, indistinguishable from the PKK. In Syria, Turkey and Russia also support opposing sides. While Turkey backs moderate opposition groups against Assad, Russia is the main supporter of the Assad regime, which targets civilians in its advance through northwestern Syria.

Protesting Russia’s support of the Assad regime against Turkish troops, Turkish military personnel have boycotted joint patrols in northern Syria since the beginning of this month.

U.S. Special Representative for Syria Engagement James Jeffrey visited Turkey this week. He underscored the urgency of the need to protect civilians and Turkish troops in Idlib in his meeting with Turkish officials.

Defense chiefs of both countries also discussed the importance of more concrete steps by both the U.S. and NATO on Idlib during their meeting on the sidelines of NATO defense ministers' meeting in Brussels.

Turkish troops are in Idlib, declared a de-escalation zone under a deal between Turkey and Russia, as part of an anti-terror and peace mission. Idlib has been a stronghold of the opposition and anti-government armed groups since the outbreak of the Syrian civil war in 2011.

In September 2018, Turkey and Russia agreed to turn Idlib into a de-escalation zone where acts of aggression are expressly prohibited. Since then, however, more than 1,800 civilians have been killed in attacks by the regime and Russian forces, flouting both the 2018 cease-fire and a new one that started on Jan. 12.

Regardless of the recent rapprochement between Ankara and Washington on Idlib issue against the Russia and Assad regime alliance, memories of U.S. partnership with the YPG in Syria, despite objections from its NATO ally and long-time strategic partner Turkey, are still fresh.

The U.S. has partnered with the YPG/PKK-dominated SDF in its fight against Daesh in northern Syria. The U.S. has provided military training and has given truckloads of military support to the YPG, despite Turkey's security concerns. Although it claimed numerous times that Daesh had been defeated, the U.S. support of the YPG continues. U.S. support for the YPG has been a major strain on U.S.-Turkish relations.

On the other hand, U.S. President Donald Trump, long a skeptic of U.S. military involvement in Syria, has been blamed by Democrats and even some Republicans for abandoning the U.S.-backed YPG terrorists against Turkey, and in so doing, unraveling U.S. policy.

Trump announced a withdrawal of U.S. forces from northern Syria in October, ahead of Turkey’s Operation Peace Spring to eliminate YPG/PKK terrorists from the area east of the Euphrates in northern Syria to secure Turkey's borders, aid in the safe return of Syrian refugees and ensure Syria's territorial integrity.

The PKK – listed as a terrorist organization by Turkey, the U.S. and the European Union – has been responsible for the deaths of some 40,000 people, including women and children. The PKK took up arms against the Turkish state in 1984, waging an insurgency for autonomy in Turkey's largely Kurdish southeast. The YPG is the PKK terrorist organization’s Syrian offshoot.