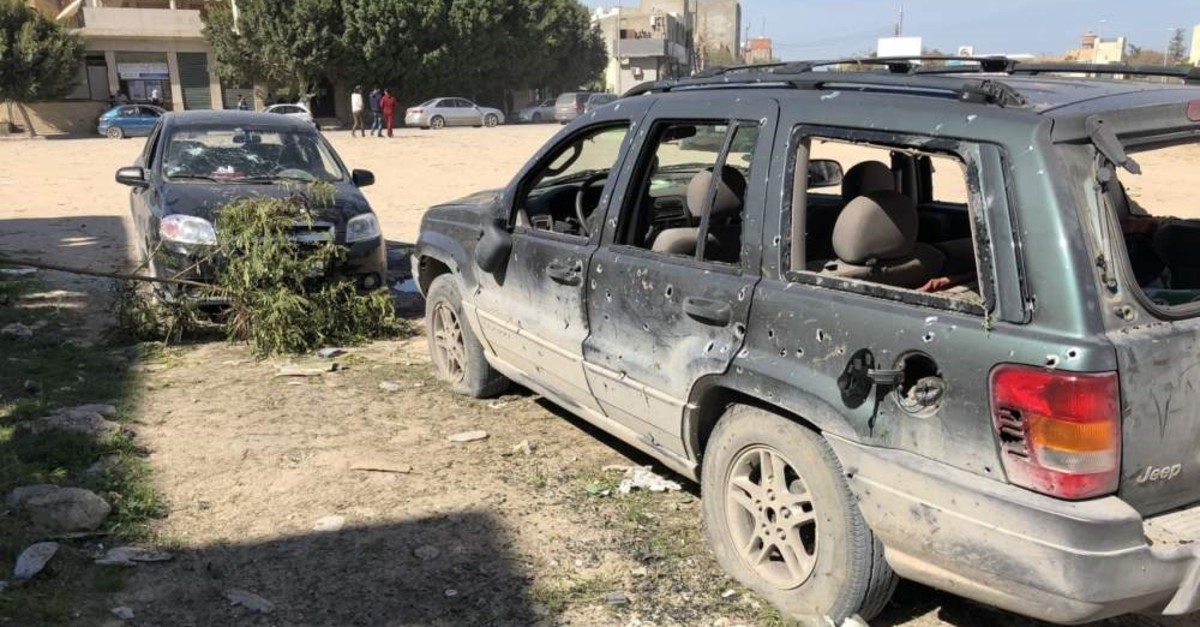 Libya's legitimate government has been under attack by Haftar's forces since last April, claiming the lives of more than 1,000 people. (IHA PHOTO)
by Compiled from Wire Services Feb 13, 2020 1:05 pm

The United Nations Wednesday condemned the obstruction of its flights into conflict-hit Libya by forces loyal to putschist Gen. Khalifa Haftar, warning of "severe consequences" to its humanitarian and peace efforts.

Speaking with reporters in New York, U.N. spokesman Stephane Dujarric said the lack of flight clearance by Haftar's eastern-based forces, fighting illegally under the name of the "Libyan National Army" (LNA), could impact a fragile peace process in the North African oil nation.

"The U.N. in Libya regrets that its regular flights transporting staff to and from the country have not been granted permission by the Libyan National Arm," said Dujarric.

"This practice has been repeated on several occasions in the past weeks,” he added.

Since the ouster of the late leader Muammar Gaddafi in 2011, two seats of power have emerged in Libya: One in the east supported mainly by Egypt and the United Arab Emirates, and the other in Tripoli, which enjoys the U.N.'s official recognition.

Haftar's LNA, which is based in the east of the country, has been trying to wrestle control of the capital from the U.N.-backed Government of National Accord (GNA), in an offensive that has stalled on the outskirts of the city. Libya's legitimate government has been under attack by Haftar's forces since last April, claiming the lives of more than 1,000 people.

A fragile cease-fire was established on Jan. 12. At an international summit in Berlin a week later, world leaders agreed to end all foreign interference in Libya and to uphold a weapons embargo. However, there are still near-daily clashes on the outskirts of Tripoli and weapons continue to flow into the country.

Mitiga, the only functioning airport in the capital Tripoli, has been regularly closed due to strikes blamed by the GNA on pro-Haftar forces.

U.N. peace envoy Ghassan Salame has tried to mediate between Haftar and the Tripoli government, which are backed by a range of international players in a "three-track" approach covering military, economic and political efforts.

"The U.N. is very concerned that preventing its flights from traveling in and out of Libya will severely hinder our humanitarian and good offices efforts at a time when all the staff are working relentlessly to push forward the ongoing three-track intra-Libyan dialogue and to provide much needed humanitarian assistance to some of the most vulnerable conflict-affected civilians," said Dujarric.

Eastern forces loyal to Haftar will not allow the United Nations to use the only functioning airport in the capital Tripoli which they have been trying to take in a campaign, a spokesman for the forces said on Wednesday.

Spokesman Ahmed Mismari told reporters the U.N. would have to use other airports, such as Misrata, because it could not guarantee the safety of flights into Tripoli's Mitiga Airport.

According to a statement from Haftar's press office, Haftar met with Christophe Farno, director of the Middle East and North Africa Department at the French Foreign Ministry, in the eastern city of Benghazi. Farno conveyed the invitation to Haftar during the meeting.

He also conveyed an invitation from French Interior Minister Christophe Castaner to his counterpart in Libya's U.N.-recognized GNA, Fathi Bashagha, to visit Paris.

While meeting Wednesday with Italian Foreign Minister Luigi Di Maio in Tripoli, Libya's Prime Minister Fayez al-Sarraj called on the international community to ensure that the decisions on Libya reached at last month's conference in Berlin are followed.

Haftar agreed at the conference on Jan. 19 to designate individuals to a U.N.-proposed military commission with five members from each side to monitor implementation of a cease-fire.

Despite the conference's call for a permanent cease-fire in the war-torn country, Haftar's forces have continued their attacks.

Moscow is accused of sending several thousand mercenaries from the private Russian security company Wagner to support Haftar, who controls much of the south and east of Libya. Russia denies any involvement.