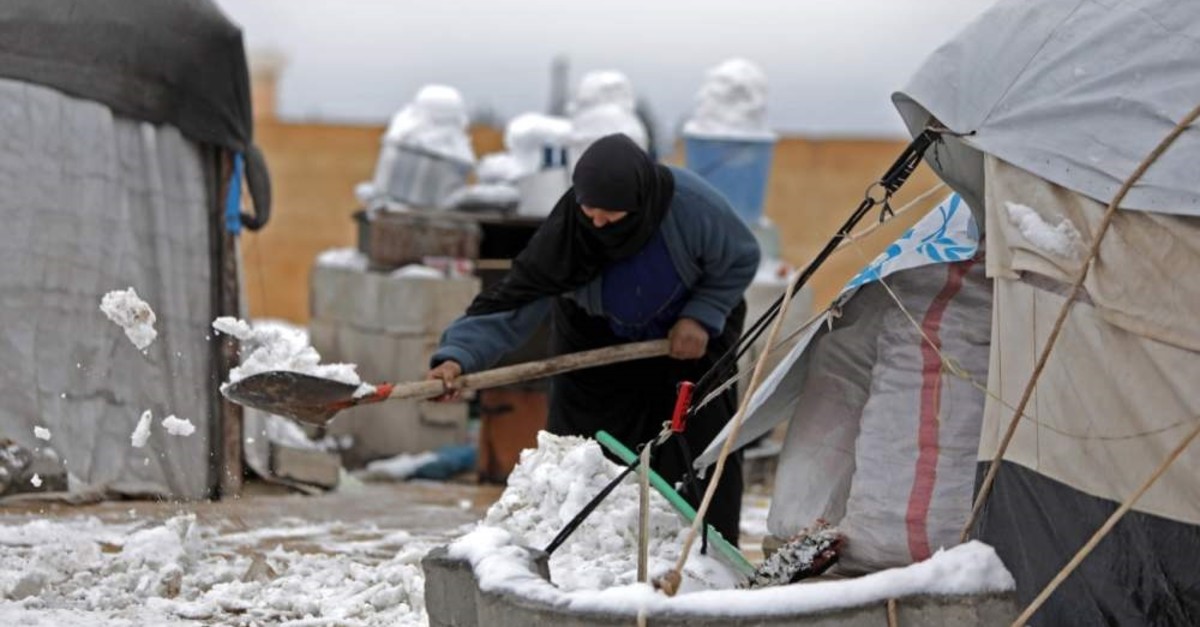 A woman who fled pro-regime forces attacks in northeastern Syria, clears the snow in front of a tent at camp for displaced people in the northern Syrian town of Tal Abyad by the border with Turkey, Feb. 13, 2020. (AFP)
by Daily Sabah with Agencies Feb 13, 2020 5:00 pm

With subzero temperatures and constant snowfall, displaced Syrians near the Turkish border struggle to get through the day and dream of returning back home

The harsh weather conditions of winter hit Syrian refugees the most as the stakes of survival climb higher every day at camps located in Turkey, which are full of displaced Idlib locals.

"The more crowded we are in tents the better since we are trying to warm each other up with our breaths," said Zehra Şeyh, one of the Syrian refugees whole fled from Syrian regime attacks and took refuge at the Turkish border. Stating the difficulty of heating the tents, Şeyh expressed that because of the cold, all the camp residents are ill.

The season shows its brutal face especially at night when the temperature falls below 0 degrees Celsius and snow pellets start to hail down. However, refugees have difficulty finding a place to live due to the lack of space and infrastructure at campsites. Turkish nongovernmental organizations continue to supply food and blankets to the displaced.

"Cold, it's too cold. We have only one blanket to cover five people. The cold killed us," said Şeyh, speaking to Anadolu Agency (AA).

Expressing that there is a major fuel shortage, Şeyh said that we are burning our own clothes to stay warm.

"It is snowing. We believe there will be even more snow in the coming days. We need wood to stay warm," she underlined.

In Şeyh's opinion, at the moment it is highly favorable to return to our villages even if we are forced to live without any shelters since it is our own village.

"We just want to go back to our villages," she highlighted.

It has been months now since regime forces escalated attacks on Idlib, the last opposition stronghold in the war-torn country, targeting innocent civilians under the pretext of fighting terrorists. However, the regime is not alone in its attacks ongoing since April 2019. As its backer, Russia is often active on the ground aggravating the humanitarian crisis.

Ahmet Cuma, another camp resident, said that no one knows what to do to tackle the cold weather.

"People are in a difficult position. Especially this wave of cold weather caused everyone to fall sick. There are new refugee laws as well. The sound of the bombardment reaches us here. Everyone is in difficulty," Cuma illustrated their conditions.

In Cuma's opinion, one of the biggest needs of the displaced people is shelter since the temperature is expected to fall even further.

"Right now, everyone in here is burning down second-hand clothes. However, even that got expensive due to high demand," he said.

He highlighted that they want to return to their hometowns as soon as possible.

According to a United Nations statement on Thursday, more than 700,000 people have been displaced in Idlib since December due to the regime attacks targeting civilians.

"Since 1 December, over 700,000 women, children and men have been displaced from their homes in north-west Syria," David Swanson, a spokesman of the U.N. Office for the Coordination of Humanitarian Affairs (OCHA), told the dpa news agency.

"This latest displacement compounds an already dire humanitarian situation on the ground in Idlib," he added, referring to the volatile region.

Whole towns in the region have been emptied as an increasing number of civilians flee northward to areas deemed safer, according to Swanson.

"Many are fleeing in open trucks or by foot, often at night, in a desperate bid to escape detection. All this while night-time temperatures drop below zero," he said.

Save the Children, a humanitarian agency, also warned on Thursday that conditions for civilians, forced to flee their homes in Idlib, are deteriorating "at an alarming speed."

At least 290,000 children have been displaced from their homes as a result of the violence there, according to the group.

"The humanitarian catastrophe we've been warning of for years in Idlib is happening now. Nearly a quarter of Idlib's population have been forced to flee their homes in just a few weeks," Sonia Khush, Save the Children Syria response director, said.

The regime and its supporters have been violating the Sochi agreement that was reached on Sept. 17, 2019 by President Recep Tayyip Erdoğan and his Russian counterpart Vladimir Putin.