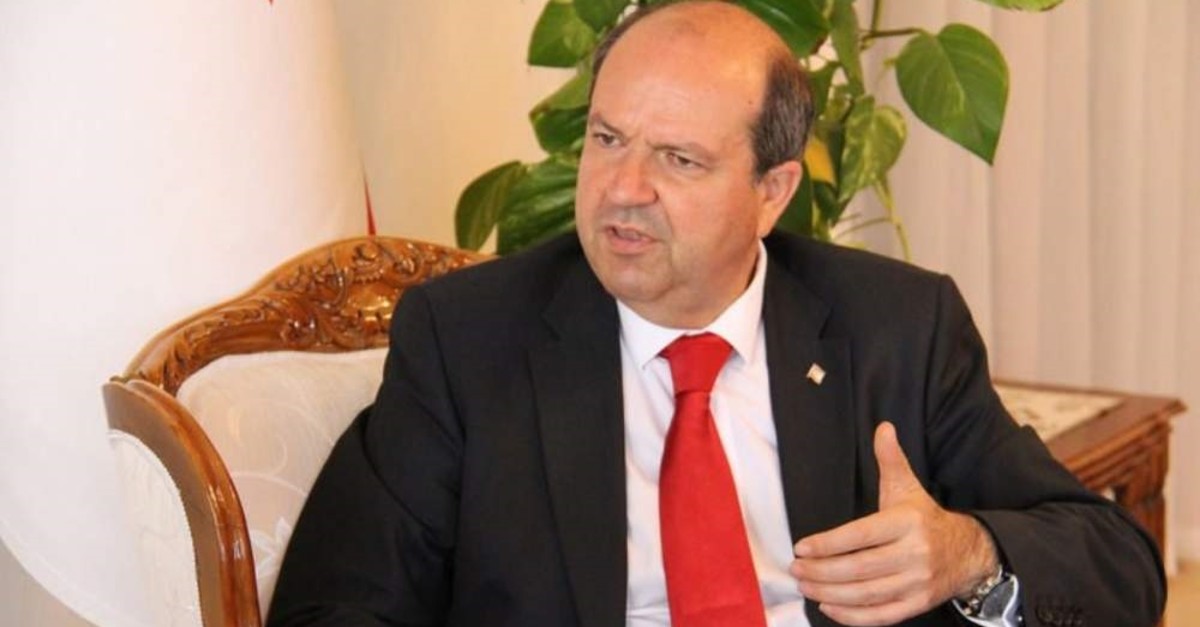 Turkish and Greek Cypriots have equal rights to exercise in the Eastern Mediterranean, the Turkish Cypriot prime minister said on Thursday.

"There are two equal nations under the Constitution and international law on the island of Cyprus; Turks and Greeks. Turks have rights equal to those of the Greeks," Ersin Tatar told Anadolu Agency in an exclusive interview during his visit to London.

Greek Cypriots have recently balked at the idea of Turkish ships exploring for hydrocarbons around the island under licenses given by the Turkish Republic of Northern Cyprus (TRNC), aiming to illegally deny Turks and Turkish Cypriots the right to energy exploration around their shores.

Tatar said it is imperative for the TRNC to win further acceptance as an independent state in the Eastern Mediterranean.

It seems unlikely that negotiations for a concrete solution based on a federal model will succeed, said Tatar, adding that the Greek Cypriot administration's uncompromising attitude since their rejection of the 2004 Annan peace plan has brought the world closer to recognizing the existence of the Turkish Cypriot state.

After the referendum on Annan's plan-which the Turkish Cypriots accepted but the Greek Cypriots rejected-the Greek Cypriot administration was admitted to the European Union, illicitly claiming to represent the entire island.

During his visit to the U.K., Tatar underlined the importance of the Turkish diaspora in the country.

"There are more than half a million Turks and Turkish Cypriots living in the U.K.", said Tatar, adding that "this creates an important opportunity to further improve relations between the U.K., Turkey, and the TRNC."

In his talks with British MPs, Tatar called on the latter not to forget that Turkey – along with Britain – is one of three guarantors powers for Cyprus, adding that Turkey had stood with Turkish Cyprus through many hardships.

"The U.K. hasn't been active enough with regards to the situation. But after Brexit, we expect concrete contributions and help from the U.K. in order for the Turkish Cypriots to be given their rights," he said.

Tatar also said he had received a warm reaction to his messages: "The U.K. has now seen there will be no solution on a federal basis. I would like to share with pleasure that reunification is no longer on the agenda," he added.

Tatar also slammed Mustafa Akıncı, the Turkish Cypriot president, for his recent controversial interview with the British daily The Guardian.

In a Feb. 6 piece, Akıncı reportedly said that a Turkish military "takeover" of the TRNC is unlikely, but not impossible.

"A Crimea-style annexation has never been on Turkey's or the TRNC's agenda, and our only aim is to strengthen the TRNC," said Tatar.

Tatar also said people holding important offices should be wary of making comments like this.

On his running to be Turkish Cypriot president in elections this April, Tatar said: "Especially after the recent developments in the Eastern Mediterranean, along with Turkey's claims in the region and remarks from our president, we are in an agreement that this office should be taken by someone who shares our vision and national policies."

He said as president, he would work for a solution based on "two states living side by side on the island of Cyprus."

The decades since have seen several attempts to resolve the Cyprus dispute, all ending in failure. The latest, held with the participation of all guarantor countries – Turkey, Greece, and the U.K. – came to an end without any progress in 2017 in Switzerland.